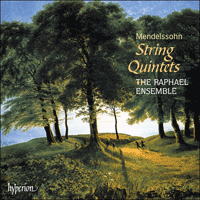 Mendelssohn was without doubt the most precociously gifted composer the world has ever known: not even Mozart produced 'mature' masterpieces while still in his teens. He was also a double prodigy on the violin and piano, an exceptional athlete, a talented poet (Goethe was a childhood friend and confidant), multi-linguist, watercolorist and philosopher. He excelled at virtually anything which could hold his attention for long enough, although it was music above all which activated his creative imagination.

The two String Quintets were composed at opposite ends of his short career. No 1 was written in 1826, soon after the completion of the Octet and E major Piano Sonata and before the Overture to 'A Midsummer Night's Dream', when Mendelssohn was still only seventeen. He later substituted a slow movement in memory of his friend the violinist Eduard Rietz, and it was this revised version of the Quintet that was published in Bonn the same year and is recorded here.

Quintet No 2 dates from 1845 (when Mendelssohn was still only thirty-six), a year before his triumphant success with Elijah in Birmingham and just two years prior to his premature death.

‘Will provide discerning listeners with a rich yield of musical pleasure’ (Gramophone)
‘Fine, stylish performances of both these wonderful works’ (BBC Music Magazine)
‘The performances are both inspired and passionate. I suspect they will provide great listening pleasure to all who admire these scores for many years to come’ (Fanfare, USA)

Felix Mendelssohn was without doubt the most precociously gifted composer the world has ever known—not even Mozart could lay claim to having produced ‘mature’ masterpieces whilst still in his mid-to-late teens. He composed his masterly String Octet in 1825 when he was still only sixteen, by which time he had also proved himself a double prodigy on the violin and piano, an exceptional athlete, a talented poet (Goethe was a childhood friend and confidant), multi-linguist, watercolourist, and philosopher. He excelled at virtually anything which could hold his attention for long enough, although it was music which above all activated his creative imagination.

Although Mendelssohn possessed a talent which was almost inexhaustible in terms of its promise and potential, he nevertheless lacked the inner determination to develop his powers to their fullest extent. He was a sensitive man who was ultimately destroyed by his constant and caring attempts to counterbalance his extraordinary gifts with the need for a small number of intimate relationships away from the exhausting demands of being an idolized musical celebrity. As he once put it: ‘The thoughts which are expressed to me by music that I love are not too indefinite to be put into words, but on the contrary, too definite.’

Of the musical generation which succeeded Beethoven and Schubert, Mendelssohn was the only major composer to adopt an openly neo-Classical style. This has led to certain misunderstandings about Mendelssohn being in some ways a backward-looking composer, one who in his early years faced up to the implications of middle-period Beethoven (again the only one of his contemporaries to do so) but who subsequently back-pedalled into anachronistic regurgitation of earlier triumphs. What this point of view fails to take into account is the actual timing of Mendelssohn’s instigation of entirely novel procedures. Indeed, at the same time as Beethoven was working on his late-period masterpieces in the early-to-mid 1820s, Mendelssohn the teenage prodigy was already developing a style based upon the Classical virtues of formal and textural clarity, but which in its tendency towards lyricism rather than pure thematicism clearly looked forward to the Romantic era. Indeed, he encapsulated at a stroke the nineteenth-century problem of integrating lyrical material into logical sonata structures—and triumphantly succeeded.

It is also traditional in some musical circles to consider that in order for a composer to achieve true greatness he (like some Masonic test) must have peered over into the abyss and faced man’s ‘dark’ side; this might be in the form of a religious quest, for example, or some brooding spiritual introspection. Mendelssohn, however, was (until his final years) a predominantly sunny personality, whose intellectual grasp of philosophical ideas per se was way beyond the comprehension of most great composers. Put simply, he felt he knew most of the answers and was perfectly happy to leave it at that. Where some artists declare their unquenchable spirit with shows of macho indomitability, Mendelssohn deftly and self-effacingly moves us on with another miraculous sleight of hand.

Mendelssohn had an intimate understanding of string music and knew exactly how to extract the maximum amount of brilliance with the minimum amount of required technique. He was himself a gifted player, as Ferdinand Hiller once recalled: ‘He never touched a string instrument the whole year round, but if he wanted to he could do it, as he could most other things.’ The string quartets, quintets and octet were therefore written as much for the performers’ pleasure as that of the audience, with an unusual balance of interest among the various parts despite the seemingly inevitable first violin domination. Although there are some who still consider Mendelssohn to have essentially been too lightweight a composer to succeed totally in this most exacting of mediums, as regards string quintet writing itself there can be no doubt that in terms of formal structure, internal balance, clarity, textural variety and interest Mendelssohn achieves something very close to perfection.

The two string quintets were composed at opposite ends of Mendelssohn’s short career. String Quintet No 1 in A major, Op 18, was written in 1826, shortly after the completion of the String Octet and E major Piano Sonata and before the overture to A Midsummer Night’s Dream, when Mendelssohn was incredibly just seventeen years old. Dissatisfied with the original minuet second movement, in 1832 he substituted a slow movement composed in memory of his friend the violinist Eduard Rietz, and it is this revised version of the Quintet which was published in Bonn the same year and is recorded here.

In comparison with the fire and drive of the String Octet’s outer movements in particular, the A major String Quintet appears positively relaxed, taking the relatively genial Mozart and Schubert as its main stylistic cues rather than Beethovenian intensity and momentum. Once again the stylistic and structural assurance and maturity border on the staggering, for not only is the tone quite unlike anything else that was being composed at the time (Beethoven and Schubert were simultaneously pouring out their late masterpieces), but it also embraces a quite unique form of lyrical monothematicism. Indeed the only ‘new’ material which emerges after the initial statement of the glorious opening melody is nothing more than a counterpoint to the original. Even the dancing figuration which first appears in the cello at bar 35 is derived from it, and the much-delayed second subject which eventually arrives in the orthodox dominant key of E still has this same theme as its background. The final coda, a Mendelssohn speciality which invariably finds his musical imagination working at full stretch, is a stroke of genius as a twice-repeated rising scale from the first violin melts away into the equivalent of a musical sigh, setting up a quiet end to this radiantly beautiful movement.

The F major ABA Intermezzo which Mendelssohn composed for the 1832 version is one of those elusive, emotionally subtly understated pieces which, despite a more ominous-sounding D minor middle section, creates a tantalizingly unresolved ambivalence so that even at the end the listener is not quite sure whether Mendelssohn’s sincere expression of personal grief has been entirely resolved.

There are many who claim—with some justification—that Mendelssohn’s most lasting contribution to Western music was the creation of an entirely novel form of gossamer-textured Scherzo, replete with darting, half-illuminated, interweaving ideas. For the remarkably similar equivalent of the Octet, Mendelssohn had taken some lines from the ‘Walpurgis Night’ episode from Part I of Goethe’s Faust as his inspiration:

Train of clouds and flowering mist
Illuminate the sky,
Reeds and leaves by wind are kissed
Then all must quickly fly.

It is not until the driving triplet rhythms of the finale that the influence of Beethoven is keenly felt, in particular the rhythmically prototypical finales of the latter’s String Quartet, Op 18 No 1, and String Trio, Op 9 No 3. However, whereas Beethoven is all physical indomitability and muscular propulsion, Mendelssohn is on his toes, as light as air. Subtleties abound, including a relatively early arrival of the second subject to counterbalance the first movement’s delay, although it is the all-pervading triplets that dominate the movement as a whole. Also nicely judged is the appearance of a new idea in the development section in duplets, which has the effect of temporarily stabilizing the self-propelling fluidity of the rhythms elsewhere.

String Quintet No 2 in B flat major, Op 87, dates from 1845 (Mendelssohn was still only thirty-six years old at the time), a year before his triumphant success with Elijah in Birmingham and just two years prior to his premature death. His fifth and last child, Lili, was born that year, and he maintained close contacts teaching at the Leipzig Conservatory where his by now somewhat irascible mood swings were causing some concern. The pupils adored him, however, if only for his prodigious talent. Even Mendelssohn was proved fallible on one occasion, when a student could not work out which note to place next in a contrapuntal exercise. Mendelssohn took a long studied look and, confirming the student’s problem, remarked: ‘Neither can I!’

One of Mendelssohn’s trademarks is a predilection for the concertante style of quartet/quintet writing as most spectacularly deployed in the first and third of his Opus 44 Quartets. The opening of the B flat Quintet’s first movement encapsulates this to stunning effect with the first violin launching ahead with an exhilarating theme while the rest of the ensemble accompanies with excited chordal semiquavers. This allows for a far greater range of textural contrast than many other composers (even Beethoven is hardly blameless in this respect) whose contrapuntal obsessions can lead to a certain textural two-dimensionalism. It also allows for differentiation of presentation so that when the theme returns, the increase in contrapuntal activity allows him to move straight into the second subject as though it were the most natural thing in the world. As always with Mendelssohn even the most apparently carefree of musical materials is deployed with exceptional skill and inventiveness. If a certain déjà vu as regards the Octet is almost inevitable (the thrilling ending to the movement, for example), the charge that Mendelssohn spent the latter part of his all-too-short career reliving old triumphs is an unfair generalization.

The all too brief Andante scherzando is reminiscent of the half-lit world of the Scherzo from A Midsummer Night’s Dream (1842), with its gentle hints of nocturnal spookiness (the pizzicato ending is a particularly delightful touch). In comparison, the Adagio e lento creates tensions between a predominately chamber style and pseudo-orchestral outbursts, the heavenly coda transforming the whole movement with a magical harmonic side-step into D major. If the breathless finale occasionally appears obsessively fleet-footed and manically busy—even Mendelssohn admitted to not having a very high opinion of it—the composer’s extraordinary skill in generating interest from material which might at first sight appear less than promising nevertheless triumphantly affirms his place as one of the great masters of his craft.