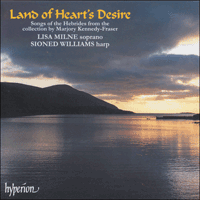 Songs of the Hebrides from the collection by Marjory Kennedy-Fraser

34 songs from the famous Songs of the Hebrides collection by Marjory Kennedy-Fraser published in the early years of this century. There are some extraordinarily beautiful songs here (Ernest Newman wrote of them that Schubert and Hugo Wolf would have knelt and kissed the hands of their unknown composers). The most famous song in the collection is the Eriskay Love Lilt but several of the others will be familiar to anybody who has bought our Bantock recordings: Sea Longing was the inspiration for the slow movement of the Celtic Symphony, and Kishmul's Galley is the tune blazed out by the Royal Philharmonic horns at the end of the Hebridean Symphony (CDA66450).

‘Enchanting little gems [that] have a magnificent beauty’ (BBC Music Magazine)
‘A treasure house of gems … this is as fine a solo debut album as I have encountered all year and deserves a cult following. It will come near the top of my Christmas list’ (The Sunday Times)

The north-west of Scotland is a wild and rocky region, buffeted by Atlantic winds and torn by ocean currents into ragged coastlines and myriad islands. These are the Hebrides, comprising the Inner Hebrides (principally Skye, Raasay, Rhum, Eigg, Muck, Mull, Jura and Islay) and, fifty miles further out into the ocean, across The Minch, the Outer Hebrides, known as the Western Isles – a hundred-mile-long archipelago from the large islands of Lewis and Harris in the north, the Uists and Benbecula in the middle to Barra in the south. It is a land under constant attack from wind and sea; treeless and desolate except for the gorse and heather which cling to the sparse and shallow soil. And yet, despite the inhospitable though beautiful terrain, these islands have been the home of a proud and hardy race since times of Celtic antiquity, still retaining Gaelic as an everyday tongue.

It was to the Outer Hebrides that the Scottish musicologist and folksong researcher Marjory Kennedy-Fraser first went in 1905 in search of the rich and ancient traditions of music and legend, and found them among ‘the most natural, genuine and uncorrupted people I have ever met, the dwellers in the lonely islands of the Outer Hebrides’. Marjory Kennedy was born in Perth, Scotland, in October 1857, the daughter of singer David Kennedy with whom she toured the world as accompanist whilst still a child. Later she studied singing in Milan and became a pupil of Mathilde Marchesi in Paris. She taught singing for some years in Edinburgh after the death of her husband, the mathematician A J Fraser. She will be remembered, however, for the several volumes of Songs of the Hebrides published in 1909, 1913, 1917, 1921, 1925 (From the Hebrides) and 1927 (More Songs from the Hebrides), the fruits of a labour of love and scholarship which drew from Ernest Newman the following tribute: ‘Mrs Kennedy-Fraser holds the highest place among British folksong collectors. She has laboured hard in the collection and editing of Hebridean song. She has a poet’s love of the islands and the peculiar phase of civilization they represent, but she is also a very skilled musician, and the accompaniments she has arranged for these songs are equal to the best that has been done in any other field. The songs themselves have a strange beauty that grows on us the better we know them. They have a very definite physiognomy and a very definite soul, both of them the result of the constant pressure of a very definite environment upon a people virtually isolated from the general life of Europe. These islands seem to have produced some song-writers to whom it is not at all extravagant to attribute genius. There are melodies among these songs that are as purely perfect as any melody could be. Schubert and Hugo Wolf would have knelt and kissed the hands of the men who conceived them … for sheer beauty of invention, sheer loveliness in the mere fall of the notes, some of these melodies are without their superior, whether in folksong or art song.’

There was much folksong-collecting activity in the British Isles and elsewhere during the early years of the twentieth century. The other collectors mentioned by Ernest Newman included such figures as Vaughan Williams (known to have recorded some eight hundred songs), Gustav Holst, Percy Grainger, and of course the indefatigable Cecil Sharp, and there is no doubt at all that without their enthusiastic labours we would today be without many treasurable melodies and works based upon them by the above-mentioned composers and others such as Delius, Butterworth and Bantock.

The songs found by Mrs Kennedy-Fraser fall into many categories: love songs, cradle songs, work songs to accompany the varied tasks of the islanders – cloth-making, cattle tending, milking and churning, fishing and seafaring; songs about the legends and magic and history of the Celtic race; and what she called ‘sea-rapture’ songs in praise of the endlessly changing beauty of the Hebridean light, clouds and ocean. She was helped in her researches by a number of devoted colleagues. Principal among them was the Gaelic scholar and poet the Reverend Dr Kenneth Macleod (1871–1955) who, besides himself contributing many songs from his native island of Eigg and elsewhere, provided many of the texts and translations (Mrs Kennedy-Fraser knew very little Gaelic herself). Other airs came from the collection by the Reverend Patrick Macdonald, published in 1784, and from another much respected contemporary folksong-researcher, Frances Tolmie of Skye (1840–1926).

Some of the songs in the second volume of 1913 were arranged not by Mrs Kennedy-Fraser but by Sir Granville Bantock (1868–1946) who used several of them in his orchestral music and also in his opera The Seal Woman (completed in 1924) for which Mrs Kennedy-Fraser wrote the libretto. The two songs on this disc arranged by Bantock are Sea-Longing (which he used to magical effect in his Celtic Symphony) and The Birlinn of the White Shoulders. These and other melodies inspired several of his works such as the Hebridean Symphony, Caristiona, The Seagull of the Land-under-Waves, The Sea Reivers, Two Heroic Ballads. (Several of these rich scores are recorded on Hyperion by the Royal Philharmonic Orchestra under Vernon Handley.)

Not all of the songs originate from the islands; many are thought to have come originally from the mainland, though in the manner of folksong there are many variants and it is difficult to put any time or place of origin to them. Most were, of course, unaccompanied, and it is for her skill and respect when providing accompaniments that we must be grateful to Mrs Kennedy-Fraser. In her preface to the second volume she says: ‘In setting the airs we have in no case altered the melodies. We have tried merely to set them in a harmonic and rhythmic framework of pianoforte wrought-metal, so to speak, as one would set a beautiful stone, a cairngorm or the like, and have tried by such setting to show the tune more clearly – have tried to bring out its peculiar character.’

The collections had a considerable influence on British music and culture of the time and things Celtic became very much a vogue. Rutland Boughton met Mrs Kennedy-Fraser after her second visit to the islands in 1907/8 and was ‘ravingly enthusiastic’ about her work which undoubtedly inspired his opera The Immortal Hour which began its world-record-breaking run in 1923 at the Regent Theatre in London. And it was Boughton who introduced the songs to Bantock who, in his turn, became captivated by them.

Although published with piano parts, the songs are equally effective when sung with harp as on this record. The harp was, after all, the instrument of the Gaelic bards and minstrels.