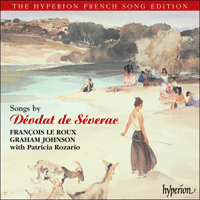 Happily there seems to be a revival of interest in this attractive minor French master.

A contemporary of Ravel and Debussy, the three of them were once regarded as the leading French composers of their day. But Séverac died comparatively young, away from Paris musical life, having chosen instead to live and work in his native Languedoc, which he loved and portrayed in his music. He also preferred to work in the smaller, more intimate musical forms—piano music, songs, a few chamber pieces (though he did write an opera which is by all accounts a very attractive work well worth revival; an air from it is included here).

This CD assembles nearly all of Séverac's songs, and very varied and attractive they are. Some are settings of his own words (he was a skilled writer and painter as well as musician) and some of Languedocian folk songs. Other texts are by Verlaine, Maeterlinck and Edgar Allan Poe (in French).