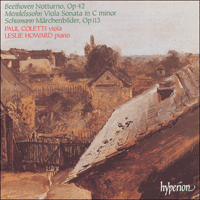 Surprisingly, the repertoire for viola and piano from the nineteenth century is extremely small; the works recorded here are just about the only three to have withstood the test of time.

The Beethoven Notturno is an arrangement (by Franz Xaver Kleinheinz) of the Serenade for string trio, Op 8. The arrangement was sanctioned, albeit somewhat reluctantly, by Beethoven and includes a small amount of expansion and imitative development over the familiar original work. Mendelssohn's Viola Sonata is an early work (1823) and contains the genesis of melodies now more usually associated with his First Symphony and the Variations sérieuses, Op 54. Schumann's Märchenbilder draw their inspiration from the nineteenth-century predilection for fairy-tale and folklore; the four pieces are not based on any particular stories but are linked by a common D tonality and, as the title suggests (Bilder = pictures), give an impression of the ethos behind the fairy-tale fascination of the Romantic era.

This disc provides an opportunity to hear three relatively unknown works for viola and piano by three of the greatest composers of the early nineteenth century. In addition, the works chosen illustrate three important instrumental genres of that period: the arrangement, the sonata, and the series of character pieces.

Beethoven Notturno, Op 42, (arranged by Franz Xaver Kleinheinz)
The growing amateur market for music in the late eighteenth and early nineteenth centuries encouraged publishers to increase their profits by issuing suitable works in all manner of instrumental arrangements. In the great majority of cases the task of making the arrangement would be entrusted to someone other than the original composer; publishers must have maintained a ‘stable’ of small-time musicians prepared to undertake a job which did not in theory prevent the display of genuine musical creativity and sensitivity, but which in practice was largely a matter of routine hack-work. It goes without saying that, in the absence of any copyright protection, the original composer might be the last person to be involved or even consulted. And payment was of course entirely out of the question: this was a publishers’ market.

Beethoven’s early-won popularity, like that of Haydn, made his music a natural resource for the arrangement industry, though he had little respect for the practice and attempted to exercise some control over it. The Notturno, Op 42, is not an original work for viola and piano but an arrangement of his Serenade for string trio, Op 8 (‘notturno’ and ‘serenade’ were essentially synonyms; the former term is not to be equated with the piano nocturne). Beethoven had composed the Serenade in 1796/7 and it had been published by Artaria in the latter year. The Notturno, published by the Leipzig firm of Hoffmeister and Kühnel in 1804, is not his own work but that of Franz Xaver Kleinheinz (c1770-1832) who was also responsible for Beethoven’s Op 41, an arrangement for piano and flute (or violin) of the Serenade, Op 25, for flute, violin and viola. Beethoven corrected and approved Kleinheinz’s score in each case, however, so Op 42 may safely be regarded as an ‘authorized’ arrangement, even if grudgingly so: ‘I have gone through [the arrangements] and made drastic corrections in some passages. So do not dare to state in writing that I have arranged them’, he wrote to the publishers; ‘If you do, you will be telling a lie, seeing that, moreover, I could never have found the time, or even had the patience, to do work of that kind.’ (In addition to straightforward correction of the transcription, Beethoven permitted himself an odd extra bar and occasional new imitative counterpoint.)

The seven movements of the Serenade/Notturno typically alternate fast and slow tempi, although this bare description does not do justice to the central (fourth) movement, which alternates a D minor Adagio with a tiny D major Scherzo (Allegro molto). The overall scheme of this movement is Adagio – Scherzo – Adagio – Scherzo – Adagio. Moreover, the second appearance of the Scherzo is truncated, consisting of a modified first section followed by a new ending which leads directly into the closing (again, modified and shortened) Adagio. The idea of building a movement out of two discrete and opposed bodies of material was one that Beethoven was to exploit further, most immediately in the finale of the String Quartet in B flat, Op 18 No 6, and more remotely in several movements from the late quartets. Another connection to the Op 18 quartets is discernible in the sixth movement of the Serenade/Notturno, a theme and variations. Not only does this share its key (D) and form with the slow movement of Op 18 No 5, but both movements also make a surprise turn to the key of B flat near their end. In the Serenade/Notturno this turn heralds a free variation which acts simultaneously as a transition to the reprise of the opening march movement.

Mendelssohn Sonata for viola and piano in C minor
Mendelssohn’s Viola Sonata in C minor was written between November 1823 and February 1824. The fifteen-year-old composer’s choice of key may have been inspired by Beethoven’s important corpus of works in C minor, including the Violin Sonata, Op 30 No 2; he certainly seems to have felt impelled here to accentuate the traditionally dark and troubled connotations of C minor with a rich vein of chromaticism. And just as Beethoven’s Op 8 was to re-emerge in its arrangement as Op 42, so part of Mendelssohn’s Sonata was destined to receive a new identity as early as March 1824 when the composer reworked the Menuetto as the third movement of his Symphony No 1 in C minor, Op 11 (he also reinvented the theme of the variations for his great Variations sérieuses, Op 54). The Symphony was published in 1828; the Viola Sonata itself remained unpublished until 1966.

The overall scheme of the work bears extended discussion. Taken by itself, the sequence of movement titles seems to suggest an orthodox four-movement sonata, notwithstanding the (common) reversal of the customary order of the inner pair. But this is deceptive, since the closing Allegro molto is not an independent piece but a virtuosic coda to the series of variations that forms the third movement. Nor is that movement itself without sign of an original approach to a form that can lead easily to inconsequential, repetitive and static structures. The theme already moves beyond the commonplace in its 8 + 10 bar structure, and the individual variations are prevented from being isolated one from the next by Mendelssohn’s linkage technique, which ensures a seamless continuity from beginning to end. The harmonic structure of the theme begins to be modified as early as Variation 4, until with Variation 8 (Adagio in contrast to the preceding Andante) it is set completely aside in favour of a free rhapsodic section, in C major rather than minor, scored largely for piano solo: the effect is as of a Lied ohne Worte being suddenly intruded upon the scene. This section provides the perfect foil for the closing minor-key coda, to which it is connected by a recitative passage given over largely to the viola.

These events at the end of the third and final movement of the Sonata may be conceived as a kind of magnification of the scheme of the first movement. This is a relatively straightforward sonata design with the main Allegro being preceded by a slow introduction. In the recapitulation, the second-group material is brought back in the tonic major (C major). Rather than closing in that key, however, a short coda using material that had not been recapitulated reintroduces C minor, just as at the end of the work. This first-movement coda, though, is pianissimo; the music simply fades away. And the quiet ending at this stage throws additional weight on to the third-movement coda: it responds not only to the third movement but to the first also. In organizing the Sonata along these lines Mendelssohn was both demonstrating his understanding of the end-weighted dynamic structures so powerfully exploited by Beethoven and also foreshadowing the importance as a closural device of the virtuosic coda in the mature works of some of his contemporaries, such as the first and fourth of Chopin’s Ballades.

Schumann Märchenbilder, Op 113
With its espousal of the irrational and the fantastic, and its witness to a national consciousness, the Märchen, or fairy-tale, could not but emerge as an important category of Romantic literature, whether in the form of the traditional stories collected by the brothers Grimm or the invented tales (Kunstmärchen) of Goethe, Tieck, Brentano and others. It comes as no surprise to find that Schumann was particularly attracted to the genre. His Haushaltbuch records that he composed the Märchenbilder, which are not given programmatic titles or identified with particular tales, in the first few days of March 1851; he tried them out with his friend (later to become his first biographer) Wilhelm Joseph von Wasielewski on the 15th. Typically the Haushaltbuch records various titles for the set: Violageschichten, Märchengeschichten, Märchen, and Märchenlieder. It is interesting that Schumann eventually chose to align these pieces with a visual art-form (Bilder = pictures) rather than with the textual genres of the story (Geschichte) or song (Lied). His devotion to literature as well as music is well known and documented; less often stressed is his enjoyment of painting. Dresden and Düsseldorf, where Schumann lived and worked from 1844 to 1850 and from 1850 respectively, each boasted an important school of painters with which Schumann had considerable contact. Another, later chamber work invoking the fairy-tale was, however, to allude to the story-teller in its title: this was the Märchenerzählungen, Op 132, for clarinet, viola and piano, composed in 1853 (erzählen = to relate, narrate).

The four Märchenbilder, Op 113 (they were published in 1852, and with an alternative, ad libitum violin part) consist of a series of contrasting short pieces which form a musical whole not through any obviously shared thematic or motivic content, but rather through a common D tonality: the first and third pieces are in D minor, the second in its relative major, F; the final piece turns to D major, despite the evocation of melancholy in the performance direction. The only real tonal surprise comes with the middle section of the third piece, which starts out Étude-like, as a study in rapid arpeggios for the viola; following the D minor cadence at the end of the first section, the new and unlikely key of B major is as it were superimposed upon the music with no warning whatsoever.