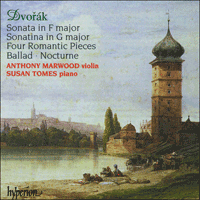 Dvořák's music for violin and piano comes from many periods in his career. An early Sonata in A minor of 1873 is lost. Of the works which do survive, several, including the Notturno and Four Romantic Pieces, are skilful arrangements of earlier works (the Notturno is a reworking of the central section of the E minor String Quartet, while the Four Pieces were originally written for viola and piano).

There are two extensive compositions exclusively for violin and piano: the Sonata in F major, interestingly designated by the composer as being for 'piano and violin', and the popular Sonatina in G major, composed during his stay in America. Both are models of perfection in this most relaxed of chamber-music genres.

The Ballad in D minor was composed in the autumn of 1884 specifically for publication in the Christmas edition of the London Magazine of Music and is a work with a tragic and passionate tone akin to that of the Seventh Symphony.

Dvořák’s music for violin and piano comes from many periods in his career and is a good deal more extensive than his works for solo cello with piano. Unfortunately the early Sonata in A minor of 1873 is lost, though the musical magazine Dalibor gave an extensive and tantalizing account of its first performance on 22 January 1875, praising the composer’s ‘buoyant creative force’. A number of the works which do survive, including the Notturno and Four Romantic Pieces, are expert arrangements, but Dvořák did write two extensive compositions exclusively for violin and piano: the Sonata in F major, interestingly designated by the composer as being for ‘piano and violin’, and the popular Sonatina in G major, composed during his stay in America.

If Dvořák’s duties as the Director of the National Conservatory of Music—a post he held from 1892 to 1895—meant that his time in the United States was somewhat fraught, the music of this period rarely shows signs of inordinate storm and stress; a fair amount, in fact, including the ‘American’ String Quartet and Quintet (Opp 96 and 97), was written when Dvořák was away from the bustle of New York on holiday with his family in Iowa. Many aspects of his musical style underwent change in this period. The melodic and rhythmic characteristics of his ‘American’ manner are familiar enough: breezy pentatonic themes and driving ostinati; both these features were present in his earlier music, but during his stay in the New World they acquired greater prominence. His approach to form was also developing: in response to the greater simplicity of the melodic material he was using, and perhaps also as a model for the students in New York he was encouraging to found a new American style of classical music, the general shaping of movements becomes simpler. The advantage for Dvořák was that he could luxuriate in his melodic inspiration while leaving the form more or less to look after itself.

The Sonatina for violin and piano is one of the most delightful of these relaxed compositions. It was composed between 19 November and 3 December 1893, although inspiration for the slow movement had struck the composer a few months earlier when he had been to the Minnehaha Falls. The work was intended as a gift for two of Dvořák’s children, Otilka (Otilie) and Antonín, and the relative simplicity of the writing has made the work a favourite for performance by young musicians. But if the execution is undemanding, the freshness and delicacy of the piece is not so easily captured.

The first movement begins with a bold call to attention after which the violin provides a more relaxed response. The exposition that follows is characterized primarily by a strong lyrical flow; the development, economically founded on the opening idea, provides opportunity for some vigorous interplay between the instruments. Rather like the slow movement of the ‘American’ Quartet, the Larghetto of the Sonatina is consciously soulful, although the radiant, slightly brisker central section (Poco più mosso) supplies contrast. A brief, delightfully open-hearted Scherzo leads to the Finale, the broadest of the four movements. Here Dvořák’s melodic inspiration results in a sequence of memorable thematic ideas, notably in the exquisite slower section marked Molto tranquillo. As in the first movement, the fibre for development is supplied by the opening motif which also dominates the uncomplicated and optimistic close of the work.

The Ballad in D minor was composed in the autumn of 1884 specifically for publication in the Christmas edition of the London Magazine of Music for that year; a number of commissions from England, both large and small, flowed as a result of Dvořák’s growing reputation abroad. Though much slighter than the Seventh Symphony, written just after it, the Ballad has something of its tragic and passionate tone; the reflective opening idea, played by the violin, also seems to look forward to the style of Janáček.

As the Ballad shows, Dvořák was often quite as happy writing small-scale works as composing symphonies, quartets and opera. A letter to his Berlin publisher, Fritz Simrock, shows that Dvořák derived enormous pleasure, quite comparable with ‘composing a great symphony’, from writing his Bagatelles for two violins and viola. The immediate stimulus for these works was a discreet bit of domestic chamber music-making which Dvořák indulged in with a chemistry student, Josef Kruis, who lived in the same block of flats as the composer, and this amateur’s violin teacher, Jan Pelikán. The Terzetto in C major which Dvořák composed at the beginning of 1887 proved too tricky for Kruis, so he wrote a new set of works for the same combination, in which he played viola, entitled Cavatina, Capriccio, Romanza and Elegia. These were completed on 18 January 1887; within a week, Dvořák had arranged them for violin and piano as Four Romantic Pieces without the original titles.

The four movements work well in their new arrangement. In each of the movements, the solo string instrument leads off with the tune which, in the Allegro moderato and Allegro appassionato, turns out to be a fine example of Dvořák in lyrical vein, though with a tendency towards wistfulness. The vigorous second movement is angular and demonstrative, with an uncompromising folkish inflection that again anticipates Janáček. The finale is an affecting and expressive Larghetto which brings the cycle to an attractive, if subdued, close.

Some thirteen years before Dvořák wrote the Sonatina in G major, he composed the three-movement Sonata in F major for the same combination. It was written in a matter of only two weeks in March 1880, shortly before he embarked on a revision of his Violin Concerto. Before the Sonata was published, Dvořák played it through with the famous violinist Joseph Joachim who, it seems from a letter which the composer wrote to his friend Alois Göbl, ‘liked it a lot’.

Doubtless, Joachim’s positive response to the work was in part conditioned by certain clear affinities with the music of his friend Brahms. While Dvořák does not surrender his musical personality to the influence of his great German contemporary, there are times when he seems to be paying homage, most particularly in the manner in which the first movement ‘feels its way’ into the argument, and in the falling phrases at the start of the attractive Poco sostenuto. Apart from these lyrical aspects, a certain Brahmsian athleticism is apparent in the development of ideas.

But much else, in what is one of the composer’s gentlest works, is wholly Dvořákian, notably the cut of the second main melody of the first movement and the ‘Slavonic’ character of the finale—unsurprising, perhaps, since the first set of Slavonic Dances had been written only two years before. These elements are, on the whole, projected with far less virtuosity than in the Violin Concerto and the heaven-storming Mazurek composed the year before. Indeed, the prevalent mood in the sonata is one of lyrical expansion carried through with Dvořák’s customary generosity.

For all Dvořák’s undoubted facility in composition, he could also be a compulsive fiddler with his own music: many works were subject to revision, sometimes amounting to complete reworking. The Notturno in B major has a particularly interesting history from this point of view. The work began life as the central slow section of Dvořák’s wholly extraordinary String Quartet in E minor (B19) which was probably composed late in the 1860s. In one continuous movement, the Quartet often veers towards extreme key areas and occasionally verges on atonality. In its original form, the Notturno, entitled Andante religioso, was set over a pedal F sharp lasting nearly seventy bars.

Dvořák revived the Andante religioso, in a much curtailed form, as the slow movement of the G major String Quintet with double bass (Op 77, B49) in 1875. In this form the Quintet would have had five movements; two slow movements, according to the composer, ‘seemed too much’, so he extracted the Notturno. Never being one to waste an effective piece, he added a brief introduction and arranged the work, first for string orchestra and then for violin and piano (there is also a version for piano duet). In this later form, the Notturno retains its melodic freshness and rich textures without giving the listener too much of the pedal note which had dominated its original version.