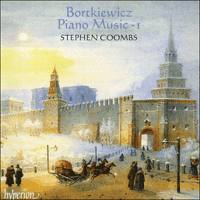 This latest release in the 'Russian Piano Portraits' series turns to the music of Sergei Bortkiewicz. The First World War and the Russian Revolution caused Bortkiewicz to lead a somewhat peripatetic existence, but in whichever city he took refuge he was greeted as a virtuoso pianist and accomplished composer.

As one would expect, many of his works are for his own instrument—the piano. The Lamentations and Consolations set is among his most characteristic works: intensely melodic with a brooding romanticism often reminiscent of Liszt. The fairy-tale interpretations of Aus Andersens Märchen, subtitled 'A Musical Picture Book', come from the large corpus of pieces Bortkiewicz composed with children in mind, while the opus 33 Preludes owe much of their character to Chopin.

‘Abundance of melodic appeal and inventiveness. Bortkiewicz seems incapable of writing unattractive music so one is able to derive pleasure from the pieces here. I shall certainly look forward to further volumes in this series’ (Gramophone)
‘The hand of a master melodist and tone painter is manifest throughout this beguiling recital. A recital to delight the connoisseur of forgotten late 19th-century romantic piano music’ (Classic CD)
«Une irrésistible joliesse pianistique qui ruisselle ici sous les doigts de Stephen Coombs» (Diapason, France)