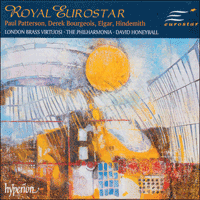 This 'Royal Eurostar' recording is a celebration in music of one of the most important engineering feats of the twentieth century—the building of the Channel Tunnel, and the creation of probably the finest railway station ever built: Waterloo International. The Paul Patterson works were all composed for the State Opening of the tunnel on 6 May 1994 and are intended to exploit the extraordinary acoustic inside the new Waterloo station (including the constant 'pedal D' which comes from the train engines!).

Accompanying these pieces, we have dramatic brass compositions by Richard Strauss, Hindemith and Elgar, and, appropriately for so European a project, the William and Mary suite, composed by Derek Bourgeois in 1988 for the London Brass Virtuosi to celebrate the tercentenary of the accession to the British throne of William and Mary.

‘Brass fans get an engaging, well played program that offers a blend of the familiar and the pleasing new, and makes for an easy recommendation’ (Fanfare, USA)