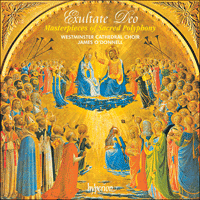 Cover artwork: The Coronation of the Virgin by Fra Giovanni da Fiesole (d1455)

Eighteen of the most famous works of Renaissance polyphony, including the Allegri Miserere and the eight-part Lotti Crucifixus, performed by the Choir of Westminster Cathedral under James O'Donnell. This recording was made one hundred years after the foundation stone of the Westminster Cathedral was laid and is a testimony to a century of conservation and innovation in the performance of music within the Roman Catholic liturgy.

One of the most attractive and spectacular records this famous choir has made to date ...

‘The answer to many prayers; a blockbusting survey of choral masterpieces performed by a choir of exceptional calibre’ (Classic FM Magazine)
‘For anyone eager to sample varied music from the Golden Age of polyphony this is a perfect disc’ (Classic CD)
‘If ever a programme was right up a choir's street, then this is it! From the fanfare-like opening of Exultate Deo and its soul-mates by Viadana, Gabrieli, Byrd and Monteverdi, through the linear beauties of Ave verum corpus (as set by Byrd and Philips) and Parsons' Ave Maria, the imploring devotion of Lotti's incomparable Crucifixus and the serenity of Tallis's O nata lux, all is brought glowingly alive. A real joy’ (Organists' Review)

The dates which musicians use to delineate historical periods are frequently misleading. The year 1600, for instance, is conventionally regarded as a convenient point at which to separate the Renaissance era from the Baroque; the fact that the earliest complete surviving opera dates from that year fuels this otherwise arbitrary division. However, the labels Renaissance and Baroque are of limited use when applied to the sacred music of the late sixteenth and early seventeenth centuries: there is little of the neoclassical about the music of Palestrina, and few grotesque ornaments in Monteverdi’s music for the church. In England the distinction between Renaissance and Baroque carries even less weight—it is only the Puritanism of the Protectorate in the mid-seventeenth century that interrupts a continuous stylistic thread that links the sacred music written during the years immediately preceding the Civil War with that of the Reformation. In short, there is much that connects the items within this anthology in spite of historical generalizations that might indicate otherwise.

The context of the English music recorded here is curious. The effortless polyphony of the Ave Maria by Robert Parsons and the ebullient deliberacy of Tye’s Omnes gentes were a product of Queen Mary’s short reign in the 1550s when for five years Roman Catholicism returned to England. However, with the accession of Mary’s half-sister, Elizabeth I, England once again became a Protestant nation; there, the Latin motets of Tallis and Byrd would not have found a place in public worship, even in the monarch’s own chapel. These motets were designed for unofficial Roman Catholic gatherings, hence the intensely intimate nature of the musical settings. Tallis’s In manus tuas, O nata lux, and Salvator mundi were all published in 1575 and are a testament to the composer’s ability to explore different and unique sound-worlds at will. Of Byrd’s three motets represented here, little can be said that does them justice. The virtuosic part-writing of Haec dies, the respectful restraint of Ave verum corpus, and the carefully-paced decadence of Civitas sancti tui are nothing short of symphonic in the true sense of the word. In contrast to Byrd and Tallis, Peter Philips fled England as a young man because he was unable to maintain his Roman Catholic beliefs comfortably. Ascendit Deus and Ave verum corpus were published in Antwerp in 1612, and the collection in which they appeared was defiantly dedicated to the ‘amplification of the Catholic, Apostolic, and Roman faith’.

No such blatant defence of the Roman Catholic faith was necessary for Palestrina who wrote his motets Sicut cervus and Exultate Deo as the choirmaster of St Peter’s in Rome, or indeed for the Spanish-born Victoria who wrote O quam gloriosum while organist at S. Maria di Monserrato—the Aragonese church in Rome. That these two sixteenth-century musical giants undoubtedly knew each other is akin to Beethoven’s period of study with Haydn in Vienna at the end of the eighteenth century and Stravinsky’s friendship with Debussy in Paris at the beginning of our own. Musical greatness is sometimes difficult to ascribe with certainty, but in the case of composers such as Palestrina and Victoria the task is an easy one; the fact that they worked in the same place at the same time is more than mere historical accident.

Like many other composers, Viadana’s reputation suffered because of his proximity to musical talent greater than his own. Exultate justi is a fine motet, but his corpus of sacred music will never be compared favourably with that of Palestrina. Allegri was more fortunate in his work in Rome, partly because he was still a boy when Palestrina died, and partly because his Miserere has found remarkable favour in its own right. Written to be sung by the papal choir in Holy Week, the Miserere is intriguing for two reasons: for its repeated use of a ‘top C’ and because Mozart copied it out from memory when he was fourteen years old.

To a large extent Lotti’s fame also relies on one piece—the magnificent eight-voice Crucifixus—and however fine the remainder of his sacred music, his music written for St Mark’s in Venice will always invite adverse comparison with the sacred music of two of his celebrated precursors, Gabrieli and Monteverdi. Between them Gabrieli and Monteverdi worked at St Mark’s for almost sixty years and it is impossible to overestimate the importance of Venice as a musical centre during that time. Gabrieli’s Jubilate Deo and Monteverdi’s Cantate Domino show both composers at their extrovert best and give the listener a small insight into the musical culture associated with St Mark’s in the first half of the seventeenth century.

A sound recording of even the most masterly examples of sacred polyphony is bound to involve compromise. The function of church music is to adorn a living liturgy. O quam gloriosum is an integral part of Vespers for All Saints, the Miserere complements the sombre drama associated with Lent, and so on. Yet, as here, the compromise can be minimalized when such music is sung by a choir whose musical raison d’être is the adornment of the daily round of Roman Catholic worship. This recording was made exactly one hundred years after the foundation stone of Westminster Cathedral was laid in 1895 and is a testament to a century of conservation and innovation in the performance of music within the Roman Catholic liturgy at the Cathedral.

Cover artwork: The Coronation of the Virgin by Fra Giovanni da Fiesole (d1455)