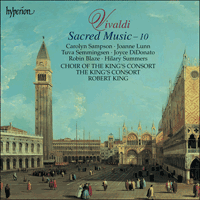 Ten years and eleven discs after its triumphant inception, Robert King’s complete recording of Vivaldi’s sacred music reaches a worthy end. The Gloria, RV589 – this is the ‘famous’ one, beloved of choral societies the world over – provides a suitably ebullient opening to a recording which also includes the lyrical Ostro picta sublimely sung by Carolyn Sampson and the Gloria by Ruggieri – the work from which Vivaldi stole many of the best ideas for his own settings of the same text.

Of great significance also is the first recording of the newly discovered Nisi Dominus, RV803 – Vivaldi’s ‘latest work’, as it were. Discovered in a Dresden library in 2003, this opulent setting is for three soloists, strings, continuo and five extraordinary solo instruments (including the fantastical ‘violino in tromba marina’ – the eighteenth century’s equivalent of the modern ‘jazz violin’?). As a historical discovery, this new work is important; as the keystone of this final disc in a ground-breaking series, it is perfect.

‘For King's sterling service to the Vivaldian cause, one of his most important recording and satisfying projects to date, I am thankful’ (Gramophone)
‘This final disc in Robert King's justly acclaimed complete edition of Vivaldi's sacred music is the project's crowning glory’ (The Daily Telegraph)
‘With Robert King, there is never a question about technical polish or keen musicianship. These are stunning performances … I would not hesitate to recommend the present disc to anyone looking for a recording of THE Gloria, both for the quality of this performance and because of the accompanying pieces, which surely must fascinate any listener with an interest in Vivaldi's most famous sacred work’ (American Record Guide)
‘The accomplished, precise and colourful orchestra is led by the ever vigourous and sensitive King, and the technically irreproachable and spot-on choir with its formidable bass section … is especially noteworthy’ (Gramophone Early Music)
‘So we have reached the end of a long, immensely rewarding trail. Brilliant, invigorating, uplifting, King's sacred music intégrale shines like a beacon in a dark world that has largely lost the ability to engage with spiritual celebration. More prosaically, it now becomes the core reference archive for Vivaldi's sacred music, a skilfully planned, superlatively engineered set of discs that will take an honoured place in recording history … as we know, there are many different ways of interpreting this repertoire, but Robert King seems to have one of the best grips on it yet by way of his energetic and unmannered view. The agile and responsive soloists, the alert and nimble chorus, and the disciplined and finely honed orchestra are all right on the mark, never wavering in either proficiency or commitment. This is a real winner, and a shoo-in for our Classical Hall of Fame’ (Fanfare, USA)

Near the end of his career, in 1739, Vivaldi once again supplied sacred vocal compositions to the Pietà during an interregnum between choirmasters – this time for payment, since he was no longer its employee. Only four of the works are extant in complete form today. They exemplify very clearly Vivaldi’s turn, in his last years, to the fashionable galant style cultivated by younger Neapolitan composers, among them Vinci, Leo and Porpora.