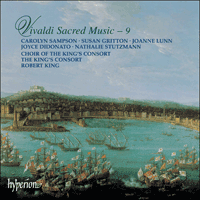 Robert King and his consort have again distinguished themselves with this, the penultimate disc of his highly-acclaimed series of Vivaldi’s complete sacred music. Recorded here are a collection of radiant settings: The magnificent Laudate pueri (RV602) and an inventive reorchestration featuring Rachel Brown on flute (RV602a); the Salve Regina (RV618) with motifs creatively modified from one of Vivaldi’s violin concertos (RV319); the exuberant Ascende laeta (RV635) and the beautiful hymn setting of Gaude mater Ecclesia (RV613) and motet Vos aurae per Montes (RV634).

Ingeniously, Robert King has again selected a cast of soloists as dazzling as this repertoire, with an ensemble that reads like the current ‘Who’s Who’ of ‘must-haves’ from the performance world of Baroque. Carolyn Sampson, Susan Gritton and Nathalie Stutzmann have all adorned previous discs in this series; Joanne Lunn and Joyce DiDonato are newcomers, both to the series and to Hyperion.

CD OF THE WEEK (THE SUNDAY TIMES)

‘As expected, the performances are breathtaking … it is hard to imagine more engaging and eloquent performances of this music’ (American Record Guide)
‘Fresh, invigorating performances’ (The Sunday Times)
‘Relaxed, warm-hearted performances’ (Classic FM Magazine)
‘The performance is absolutely superb, both Carolyn Sampson and Joanne Lunn singing with gloriously resplendent tone and accuracy’ (Fanfare, USA)
‘Carolyn Sampson splendidly fulfils the role of virtuoso-soloist’ (The Evening Standard)
‘King and his musicians sensitively underline the music's rich textures, surprising harmonies and effective word painting’ (Goldberg)
‘Robert King’s direction is very fine, with some nicely judged phrasing from his excellent orchestra. Buy this, and you too will be impatient to hear volumes one to eight’ (Early Music)

Raised as a violinist, Vivaldi probably wrote little or no church music until the second decade of the eighteenth century. But his travels with his father as a ‘jobbing’ player often placed him in situations where commissions for sacred works might have occurred. Such was the probable origin of the earliest sacred work by him on which a date can be set, the Stabat Mater, RV621 (‘RV’ numbers refer to the standard modern catalogue of Vivaldi’s works by Peter Ryom). Vivaldi had visited Brescia in 1711 to play in the patronal festival of the Philippine church, Santa Maria della Pace; among the compositions acquired by this church in the following year and listed in its account book we find the Stabat Mater for alto and strings, commissioned for the Feast of the Seven Sorrows of the Blessed Virgin, which in 1712 fell on 18 March.

Little of Vivaldi’s church music composed during this period (1713–1719) circulated in Italy outside the Pietà’s walls, but some works reached the Habsburg domains in central Europe. A visitor from Bohemia, Balthasar Knapp, acquired a number before his return to Prague in 1717, and his collection appears to have been the nucleus of a modest Vivaldi cult which flourished in such centres as Prague, Osek (in north Bohemia), Brno (in Moravia) and even Breslau (in Silesia). Vivaldi’s sacred works were also known in the capital of Saxony, Dresden, where the Bohemian composer Jan Dismas Zelenka took a few pieces into his extensive collection of church music.

Near the end of his career, in 1739, Vivaldi once again supplied sacred vocal compositions to the Pietà during an interregnum between choirmasters – this time for payment, since he was no longer its employee. Only three of the works, apparently written for Easter Sunday, are extant today. They exemplify very clearly Vivaldi’s turn, in his last years, to the fashionable galant style cultivated by younger Neapolitan composers, among them Vinci, Leo and Porpora.