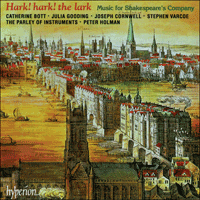 Theatrical life in London during the first half of the seventeenth century was diverse and vibrant. 'The King's Men', as the group of actors for whom Shakespeare wrote most of his plays was known, employed many instrumentalist and singers and this recording is a survey of the works composed (as incidental music or as settings of sections of the plays themselves) by Robert Johnson, composer-in-residence, and his contemporaries between the years 1609 and 1642, when The Civil War brought a premature close to the activities of 'The King's Men'.

The Shakespeare plays represented here are Cymbeline, Macbeth, The Tempest, and The Winter's Tale. Also we have settings from other contemporary plays by such authors as Beaumont and Fletcher, Jonson, Middleton and Webster.

‘Performances are uniformly superb and often enhanced by imaginative or comic touches. Full marks to Peter Holman and his team for this delightful entertainment’ (BBC Music Magazine)
‘The best and most painstaking reconstruction of music from Shakespeare's theatres available on disc’ (Sydney Morning Herald)

The King’s Men, the group of actors for whom William Shakespeare wrote most of his plays, had its origins in a company formed in 1594 under the patronage of the Lord Chamberlain. Shakespeare seems to have established himself in London as an actor and a playwright around 1590, and acquired a share in the company on its formation; he remained a member for the rest of his career in London. He was a member of the syndicate that built the first Globe Theatre on the south bank of the Thames in 1599, and was one of the company’s leaders in 1603 when it came under the patronage of the new king, James I, and was renamed The King’s Men. The Globe was an outdoor ‘wooden O’ theatre, and so the company played only in the summer until 1608/9 when it acquired the lease of the indoor Blackfriars Theatre, which enabled it to play all the year round, using artificial light and elaborate music.

Until The King’s Men acquired the Blackfriars Theatre, Shakespeare worked in a theatrical tradition that needed little or no sophisticated music. In Elizabethan times instrumentalists seem to have had no fixed position in the theatre, and their contribution to his early plays was limited largely to ‘flourishes’, ‘sennets’, ‘tuckets’ and ‘alarums’. But after 1609 The King’s Men drew on the alternative and much more musical tradition of choirboy plays, performed by troupes of musical boys from the Chapel Royal or other choirs in the London area. They inherited the Blackfriars Theatre from a choirboy company, seem to have taken some of its former actors into their company, began to employ a resident group of instrumentalists, and started to use the services of an established composer to write songs and other vocal music. Thus only Shakespeare’s last plays, Cymbeline (?1609), The Winter’s Tale (?1610) and The Tempest (1611), have specially-composed songs. They began a tradition that was continued by the composers and singers of The King’s Men until the beginning of the Civil War in 1642; this recording is a survey of their rich repertory.

The King’s Men were fortunate in that their resident composer from 1609 until about 1630 was the court lutenist Robert Johnson, one of the greatest song composers of the time. The only other musician to contribute a significant number of songs to the company’s plays during this period was the actor-singer John Wilson, his probable pupil. Johnson based his song style on the lute-song idiom established by John Dowland, but brought it up to date and modified it to suit the highly-charged atmosphere of Jacobean drama. A few of his songs, such as ‘Where the bee sucks’ and ‘Tell me, dearest’, use the idiom and structure of contemporary dance music, though most of them are in grave duple time and combine a declamatory melodic line, often determined more by speech patterns than by the demands of melodic coherence, with a simple chordal accompaniment. Johnson and his contemporaries abandoned written-out tablature lute parts in favour of simple unfigured bass lines, though they continued to use lutes and theorboes as the main accompaniment instruments.

A number of Johnson’s declamatory songs have special effects that respond to the situations in the parent plays. One of the most striking, ‘Oh, let us howl’, is part of a masque of madmen in Webster’s The Duchess of Malfi who torment the duchess while ostensibly soothing her melancholy. Johnson illustrates the situation with wonderfully sinister chromatic slides on the word ‘howl’. ‘Care-charming sleep’, from Fletcher’s Valentinian, was written for a similar situation: it is sung as the evil emperor lies dying of poison. Another side of Johnson can be heard in ‘Arm, arm! the scouts are coming in’ from Fletcher’s The Mad Lover. Memnon, the mad lover, is soothed by a vivid account of one of his former battles, illustrated by rapid repeated notes and fanfares; we inevitably think of Monteverdi, but the song almost certainly predates the stile concitato. ‘’Tis late and cold’, from Beaumont and Fletcher’s The Lover’s Progress, is sung by the ghost of a jovial innkeeper and one of the few songs of the period written specifically for a bass voice.

It is unfortunate that Johnson never published a collection of his songs, for most of them have only come down to us in poor manuscript versions and it is sometimes impossible to be sure of his exact intentions. We can be fairly sure, for instance, that Johnson would have wanted his songs sung with florid ornamentation, though there is no way of knowing whether any of the written-out examples that survive are his work. For this reason we have drawn on the various ornamented versions of his songs without feeling the need to keep to any one of them exactly. Another problem is that the domestic manuscripts that preserve the play-songs of the period almost never include choruses, and usually only preserve dialogues in garbled versions for a single voice.

‘Full fathom five’ is sung by Ariel in Act I, Scene 2 of The Tempest in the guise of a water nymph; in reconstructing the lost chorus of distant spirits that echoes him I have drawn on John Wilson’s part-song arrangement of the song, published in his Cheerful Ayres (Oxford, 1660). I have also tried to devise a multi-voice version of ‘Come away, Hecate’ that corresponds as much as possible to the text in Act III, Scene 5 of Macbeth, one of the passages borrowed at an early stage from Thomas Middleton’s The Witch. Following seventeenth-century tradition, the role of Hecate, the queen of the witches, is taken by a man. ‘Get you hence’ is a setting of the ‘merry ballad’ sung by Autolycus, Mopsa and Dorcas in Act IV, Scene 4 of The Winter’s Tale. In the play Autolycus tells Mopsa that it ‘goes to the tune of ‘Two maids wooing a man’’, but Johnson gave it a declamatory setting too complex to be mistaken for a ballad tune.

John Wilson was a less accomplished composer than Robert Johnson, though he was capable of producing attractive songs in a simple ballad-like style, such as his affecting setting of ‘A bonny, bonny bird I have’, a lament for a sparrow. The setting of ‘The blushing rose’, a duet from Massinger’s The Picture, is also an odd mixture of charm and clumsiness, and may therefore be by Wilson. The ornamented version of Wilson’s ‘Take, O take those lips away’ comes from British Library, Add.MS11608, and is perhaps by John Hilton, the compiler of the manuscript. Hilton’s own setting of ‘Hence, all ye vain delights’ is a remarkable exploration of melancholy, that most fashionable ailment of early seventeenth-century England.

The court composer William Lawes seems to have composed most of the songs for King’s Men plays in the 1630s, though his suave style was sometimes at odds with the dramatic situations in the plays. Nevertheless, he wrote fine declamatory settings of Suckling’s ‘Why so pale and wan, fond lover?’ and Denham’s famous ‘Somnus, the humble god’, and was not above setting a rumbustious drinking song, ‘A health to the northern lass’. His setting of ‘The cats, as other creatures do’, a remarkable anticipation of the piece commonly attributed to Rossini, may have been written for a lost play produced in the 1630s, though its text seems to be an allegory of London personalities at that time.

Some of the instrumental music recorded here is connected to particular plays performed by The King’s Men, such as the dance tune ‘The Tempest’ and ‘The Witches’, perhaps written by Robert Johnson for The Tempest and Macbeth. I have provided them with inner parts in the four-part ‘string quartet’ idiom popularized by Thomas Simpson in his Taffel-Consort (Hamburg, 1621); the collection includes his delightful arrangement of an Almand by Robert Taylor, a member of The London Waits from 1620 until his death in 1637. The London Waits seem to have provided The King’s Men with many of their instrumentalists in the 1620s and 30s, including the composer Simon Ives (a member from 1637), who made a delightful collection of dances in the ‘string quartet’ format. It looks as if Ives made them for the instrumentalists at the Blackfriars Theatre, particularly since the corant by the Puritan lawyer Bulstrode Whitelocke is known to have been written for them, as he recorded in his memoirs: ‘I was so conversant with the musitians, & so willing to gaine their favour, especially att this time [1634], that I composed an aeir my selfe, with the assistance of Mr Simon Ives, and called it Whitelockes Coranto, which being cried up, was first played publiquely by the Blacke fryars Musicke.’ He went on to record that they struck it up every time he went to the theatre, and added proudly: ‘it was so often called for that they would have it played twice and thrice in an afternoon.’

This recording is dedicated to the memory of Robert Spencer, who died while it was being produced. He loved English seventeenth-century song, and did more than anyone else to advance our knowledge of this rewarding repertory and the people who created it.