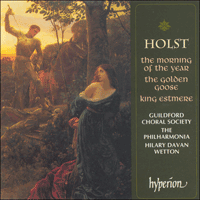 The Golden Goose and The Morning of the Year are examples of a form called the 'choral ballet' and were written in the mid 1920s. Within the umbrella term of 'Tudor-revivalism' there was a new interest in masques and Elizabethan 'dumb' shows and after the Great War such outdoor entertainments provided a focus for a celebration of national culture.

The Golden Goose tells the story of the princess who could not laugh (adapted in verse from Grimm's Fairy Tales). The 'Morning of the Year' is the spring equinox and was traditionally celebrated in Britain by morris dancers and other forms of music and dancing. The challenge that faced Holst was how to develop a modern celebration of a traditional event.

King Estmere was written some twenty years earlier and sets an old English ballad, a Romantic fantasy of love and magic. At its first performance the work won great praise for its 'very remarkable originality' (Daily Graphic) and its 'imagination and cleverness' (The Musical Times).

‘An immensely charming, tuneful collection, orchestrated with much wit and delicacy … as usual from this particular company, presentation is absolutely first-class, and the recording is ripe and realistic to match’ (Gramophone)
‘No one interested in Holst should be without it’ (British Music Society Journal)