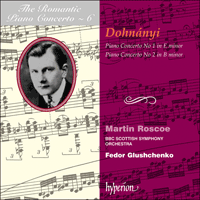 ‘Roscoe's superbly authoritative performances are majestic and glittering as required’ (Gramophone)
‘Both soloist and orchestra, not to mention the recording itself, rise gloriously to the music's challenges’ (Soundscapes, Australia)

The name of Ernest Dohnányi (born Hungary, 1877, died USA, 1960) hardly rings a bell today except in Hungary. Even those who remember him are likely to be familiar with only one of his works, his Variations on a Nursery Song for piano and orchestra (1914). His stage works, orchestral compositions including symphonies, concerti etc., vocal compositions such as the Stabat Mater (1953), as well as his numerous chamber music and piano compositions are now seldom played. One would search long to find his music in any concert programme. Yet at his peak he was one of the most versatile and influential musicians of his time. His youthful Piano Quintet (1895) was so highly esteemed by Brahms at its first performance that he personally made arrangements for it to be performed in the Vienna Tonkünstlerverein.

In this series featuring ‘The Romantic Piano Concerto’, Dohnányi’s two works in this form are fitting examples of the genre because he was throughout his life a romantic both at heart and in his musical language. Although he died as late as 1960 he had little to do with the musical developments of the twentieth century. The two Concertos on this recording evoke a world which belongs to the nineteenth century. Dohnányi continued to compose in a style deeply rooted in the Austro-German classical tradition exemplified by Brahms. His merit as a composer is that he was able to prolong meaningfully the classico/romantic past, of which he was one of the last practitioners, well into this century, both in his chamber and orchestral music. This he did with elegance, wit, and stylish virtuosity. The two Piano Concertos are fine examples of his fluent mastery of form and instrumentation.

The Piano Concerto No 1 in E minor, from the years of 1897–8, follows the traditional three-movement structure: fast-slow-fast. However, the first movement Allegro is preceded by an introductory ‘Adagio maestoso’ whose main theme is picked up, albeit in a modified way, by the first Allegro subject proper. It is characterised by a diminished 5th drop resolving upwards a minor second (E-A#-B). The structural importance of the introductory Adagio maestoso gains marked significance as it is reiterated at the end of the movement. There is nothing in the musical language—that is, in the rhythm, melody, harmony and musical structure as well as in the traditional orchestration—which Brahms would have found unfamiliar.

The second movement, with its largely pizzicato orchestral accompaniment, is in A minor. Its melodic contour is also derived in a subtle way from the ‘Adagio maestoso’. The last twenty-eight bars, during which the piano plays the opening theme originally introduced by the orchestra with broad arpeggio chords finally establishing the key of A major (known as ‘tierce de Picardi’), is an old trick, but it works superbly.

The third movement, Vivace, brings to its dramatic conclusion the opening Adagio maestoso theme which, motto-like, gives unity to the whole composition. Of the three movements this is perhaps the most Brahmsian in style with its lush sixths and thirds. A chorale-like theme played by the orchestra interrupts the flow of the cadenza. Then a frenetic coda in 6/8 is approached via a series of trills. Finally the time signature changes again, now to 2/4 Presto, leading the composition to its conclusion—not in E minor, but in the triumphant E major.

The Piano Concerto No 2 in B minor belongs to the post-World War II years, 1946–7. Thus nearly fifty years separate the two Concertos on this CD. The composer’s compositional style, however, shows little change. It is amazing to think that Bartók’s Third Piano Concerto was written two years before this one. The first Allegro movement of this Concerto also opens with a quasi-motto theme. There is something Hungarian to it both melodically and rhythmically. Among several striking passages the one which stands out is the ‘Poco meno mosso’ entry of a theme which more or less dominates the second half of the movement.

The second movement, ‘Adagio poco rubato’, again evokes Hungarian, or rather a stylised Hungarian gipsy style in G minor. It ends in G major with a gradually speeded-up repetition of the note G in the orchestra, leading directly without a break to the third movement, Allegro vivace. The ostinato G is spiced by a minor second clash which gives backing to the entry of the energetic main theme. The motto theme of the first movement reappears, albeit en passant, over a long held E in the bass. This gives way to a spirited unfolding of the material and the eventual conclusion of the Concerto.

It is incorrect to suggest, as some do, that Dohnányi bridged the gap in Hungarian music between Liszt and Bartók. This is not so, since he did not share their innovating and pioneering compositional genius. He got stuck in a style somewhere between Brahms and Saint-Saëns. What he offers, however, is an unfailing romantic spirit which to this day can evoke the musical values of yesterday, which he served and defended with such inspired dedication.