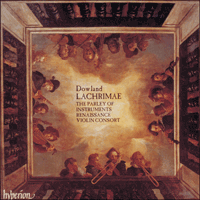 ‘The unique features, superb playing, recording and annotation make this an issue of unusual interest and irresistible attraction’ (Gramophone)
‘Excellently recorded, the disc makes for an intriguing and valuable supplement that should be heard by anyone wishing to expand their understanding of this marvellous music’ (Goldberg)
‘Outstanding’ (Early Music)

There have only been two occasions when English composers have profoundly affected the course of European musical history. The first was in the early fifteenth century when the motets, Mass movements and chansons of John Dunstable and his contemporaries became the models for subsequent developments in Flanders and Burgundy. The second was two centuries later, at the beginning of the seventeenth century, when a number of English composers and instrumentalists found work at northern European courts. They went abroad for three main reasons. Some, like Peter Philips and Richard Dering, were religious refugees, in flight from Queen Elizabeth’s persecution of Catholics. Some, such as William Brade and Thomas Simpson, were probably attracted by the lucrative opportunities available in the prosperous small courts and city states of northern Europe. Others were associated with the English theatre companies that began to tour the Continent in the 1580s and ’90s following the 1572 Act of Parliament that restricted the activities of ‘common players in interludes and minstrels’. Henceforth, actors were forbidden to work in England unless they were under the patronage of the Queen or a prominent courtier.

John Dowland probably had mixed motives for leaving England in 1594. He had just been turned down for a post as a court lutenist, but he also had Catholic sympathies. He worked first at Wolfenbüttel and Kassel, and in 1598, after a second attempt to obtain a court post, he joined the group of English musicians in the service of Christian IV, King of Denmark. He remained in Copenhagen until 1606, though he visited London in the summer of 1603 ‘on his own business’, as a Danish court clerk put it. By 1603 he was one of the most famous lutenists in Europe and could reasonably have expected a court post in the wake of Queen Elizabeth’s death in March of that year, for the wife of the new King James I was Anne of Denmark, sister of Christian IV. In the event, it still eluded him, perhaps, as Peter Warlock once suggested, because Anne did not wish it to be thought that she had poached one of her brother’s musicians. When he finally became one of James I’s lutenists in 1612 he had long left the Danish court. Dowland probably hoped to attract Anne’s attention by dedicating Lachrimae, or Seaven Teares to her. In the dedication he states that he had ‘access to your Highnesse at Winchester’ (the court was there in September and October 1603), and that he had twice tried to sail back to Denmark but had been compelled to winter in England ‘by contrary windes and frost’.

Dowland broke new ground with the publication of Lachrimae. At the time, dance music was usually written or printed in sets of separate quarto parts, but Lachrimae is a folio volume and has the parts for each piece distributed around each side of a single opening, so that in theory they could be performed around a table from a single copy. Dowland may have adopted this format, the one he used for his lute songs, because he included a lute part in tablature, which could not easily be accomodated in a small set of part-books. Lachrimae is certainly the first English collection of five-part dance music, manuscript or printed, to include a lute part, though lutes often appear in contemporary pictures of violin bands accompanying dancing.

Lachrimae is normally thought of as belonging to the English consort repertory, but part of it, at least, was composed in Copenhagen. In the dedication Dowland informed the Queen that it was written partly in her homeland: ‘I have presumed to Dedicate this worke of Musicke to your sacred hands, that was begun where you were borne, and ended where you raigne.’ It is likely, in fact, that it was partly written for, and reflects the practice of, a group of English expatriates at the Danish court, including the composers and string players William Brade and Daniel Norcombe, the dancing-master (and presumably violinist) Henry Sandam, the harpist ‘Carolus Oralii’ (an Irishman, Charles O’Reilly?) and, perhaps, ‘Bendix Greebe’ (also known as ‘Benedictus Grep’), who may have been an Englishman, Benedict Greave or Greaves. Lachrimae is typical of the Anglo-German consort repertory in that great prominence is given to pavans. They take up most of the time in a complete performance, and attention is inevitably concentrated on the ‘passionate pavans’ that open the collection. English expatriates tended to use the pavan for their most serious thoughts, perhaps because most were string players or lutenists rather than organists or choirmasters—who wrote much of the consort repertory in England and used the fantasy as their main form.

The collection is also typical of the Anglo-German repertory in that it is scored specifically for strings. According to the title-page it is ‘set forth for the Lute, Viols, or Violons, in five parts’. It is normally played today on viols, but professional string groups would have played sets of viols and violins as a matter of course, choosing the most appropriate according to circumstances. It is unlikely that Dowland intended the two families to be combined in a mixed consort; the normal practice was to use complete sets of instruments as alternatives on a musical menu, rather than as ingredients in a single dish. The whole collection can be played as it stands by the standard five-part violin consort of the time, consisting of a single violin, three violas and bass—the arrangement preserved well into the Baroque period by the French royal orchestra, the Vingt-quatre Violons. But one of the pieces, ‘M. Thomas Collier his Galiard’, has two equal treble parts and requires the more modern scoring of two violins, two violas and bass, and the situation is complicated by the fact that, with one exception, the pieces divide into two high- and low-pitched groups, about a fourth apart. The former (all the lighter pieces except ‘Sir John Souch his Galiard’) work well as they stand, but the rest are consistently too low to be effective on violins. Therefore we have transposed them up a fourth, which brings the seven ‘passionate pavans’ into D minor, the key of the earliest consort settings of ‘Lachrimae Antiquae’. The exception, ‘M. John Langtons Pavan’, is midway between the two groups in its ranges, and so we have transposed it up a tone, the key chosen by Thomas Simpson for his consort setting, published in 1610. Professional instrumentalists at the time would have made such transpositions as a matter of routine to suit the ranges and the character of different types of instrument, and a number of sixteenth-century dances survive in more than one key, presumably for this reason. We cannot be sure why Lachrimae is divided into high- and low-pitched pieces, but an obvious possibility is that it reflects the different requirements of particular groups, perhaps in Copenhagen and London.

Lachrimae was drawn largely from music already composed by Dowland in other media. It was not uncommon for lutenists and keyboard players to produce consort versions of pieces they had already worked out for their own instruments. Thus, of the twenty-one pieces, eleven exist as lute solos, sometimes under different titles: ‘M. Henry Noel his Galiard’ was also known as ‘Mignarda’, while there is an early version of ‘M. Buctons Galiard’ with the title ‘Susanna Galliard’, a reference to the fact that the tune is derived from Lassus’s famous chanson Susanne un jour. ‘The King of Denmarks Galiard’ circulated in several early versions, as ‘Mr. Mildmays Galliard’ and ‘The Battle Galliard’ (the piece uses ideas drawn from several sixteenth-century battle pieces), and was finally published in 1610 by Robert Dowland in his Varietie of Lute-Lessons. The same publication also contains the Landgrave of Hessen-Kassel’s fine pavan in honour of Dowland, based on ‘Lachrimae Antiquae’. Robert Dowland wrote that it was ‘from him sent to my Father, with this inscription following, and written in his GRACES owne hand: Mauritius Landgrauius Hessiae fecit in honorem loanni Doulandi Anglorum Orphei’ (‘Moritz, the Landgrave of Hesse, wrote it in honour of John Dowland, the English Orpheus’). It is usually thought of as an original lute piece by the Landgrave, but the divisions are remarkably sophisticated and adventurous in style and were perhaps added by the dedicatee himself.

Some pieces in the collection were also well known as songs. ‘The Earle of Essex Galiard’, ‘Sir John Souch his Galiard’ and ‘Captaine Digorie Piper his Galiard’ are in Dowland’s First Booke of Songes (1597) as ‘Can she excuse my wrongs’, ‘My thoughts are winged with hope’, and ‘If my complaints could passion move’, while ‘M. Henry Noel his Galiard’ appears as ‘Shall I strive with words to move’ in A Pilgrimes Solace (1612). We have provided ‘Captaine Digorie Piper his Galiard’ with its pavan, from a recently discovered manuscript at Kassel. It (and a pre-publication version of ‘Lachrimae Antiquae’) are probably souvenirs of Dowland’s activities at the Landgrave of Hesse’s court in the 1590s. Also, we have paired ‘Sir John Souch his Galiard’ and ‘M. Giles Hobies Galiard’ because they both borrow melodic and harmonic material from a galliard by James Harding, a piece that was often paired with ‘Lachrimae Antiquae’. Like most sixteenth-century publications of dance music, Lachrimae is organized by genre, the pavans followed by the galliards and the almans. The seven ‘passionate pavans’ need to be heard as a sequence, but we have arranged the other pieces by key so that they form suites, with the graver pieces leading to the lighter, following the example of several collections in the Anglo-German repertory.

‘Lachrimae Antiquae’, Dowland’s most popular piece, circulated in many forms, and was published as ‘Flow my tears’ in The Second Book of Songs (1600). We can presume, however, that the matchless sequence of ‘passionate pavans’ that follow it are late works, perhaps written specially for the publication, for only one of them is found in another source. They are unique works, too, in another sense. Elizabethan composers frequently derived galliards from pavans, and it was common for pavans to allude to well-known examples of the genre. A good example is the third strain of ‘Semper Dowland semper dolens’ (‘Always Dowland, always doleful’), which has a ‘synthetic’ cantus firmus in the manner of Peter Philips’s famous 1580 Pavan. But only Dowland created a variation suite of seven pavans, linked by the opening four-note descending theme and by a subtle web of thematic and harmonic inter-relationships.

Lachrimae seems to have had little influence on the subsequent development of consort music in England. The fashion for grave pavans and galliards soon passed, to be replaced by the light almans, corants and masque dances of the Jacobean age. Yet Dowland’s memory was kept alive on the Continent. Samuel Scheidt produced several elaborations of ‘The King of Denmarks Galiard’, doubtless attracted by its battle imitations, and a corrupt version of the tune of ‘The Earle of Essex Galiard’ is still found in eighteenth-century Dutch collections.