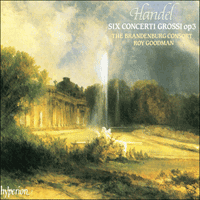 Handel composed a great variety of orchestral music, most of which has remained popular in England ever since the first performance of his incidental music for The Alchemist—a suite of movements taken from his opera Rodrigo (1707)—which was heard at the Queen’s Theatre, in London’s Haymarket, on 10 January 1710 (some ten months before Handel’s first visit to London).

The Water Music and the Music for the Royal Fireworks are justly famous, but many of his forty-plus concertos are less well known. In fact much of Handel’s orchestral music is hidden away within the operas and oratorios in the wealth of overtures and sinfonias, and the wonderful ballet music from Il Pastor Fido, Alcina and Ariodante.

Handel was not only a very gifted and prolific composer, but also, like J S Bach, a very practical one. When it was necessary to produce new music at short notice, he was quite happy to re-use some suitable material from an existing work. Many musicologists have written about Handel’s vast number of borrowings, which were mostly from himself but sometimes stolen from others! The earliest reference to this latter habit was in the July 1722 issue of Critica Musica (the first music journal) published by Johann Mattheson in Hamburg. Here we read that Handel had used an aria from Mattheson’s Porsenna (1702) in both Agrippina (1709) and Muzio Scevola (1721).

None of the musical material on this disc was actually borrowed from other composers, but it was assembled and transcribed as ‘Opus 3’ by the publisher John Walsh, using (with the exception of Concerto ‘4b’) a compilation of pre-existing works by Handel.

Walsh began publishing music in England in 1695, the year of Purcell’s death. Although the engraving of music from copper plates had been known there since about 1612, its potential was not fully realised for nearly a century, and when Handel first visited England in 1710 he turned to Walsh for the publication of his opera Rinaldo. By this time Walsh had at least four main publishing rivals in England—Cluer, Cullen, Meares and Wright—and even though the first Copyright Act had been passed in 1709 (giving sole rights for a period of up to 28 years) it was difficult to enforce, and there were countless cases of musical piracy. One of the most notorious of these involved the Concerti Grossi, Opus 6, by Corelli, first published in 1714 by Roger in Amsterdam. Walsh published his edition in 1715 and by 1790 there had been at least seven further editions published in London alone, each making individual claims to authenticity!

The origins of Handel’s Concerti Grossi, Opus 3, are inextricably tied up in this atmosphere of piracy and theft for financial gain, and it is likely that Handel had absolutely no knowledge of the first printed edition in 1734 (which probably explains his careful supervision of the twelve Concerti Grossi, Opus 6, just five years later). Walsh had just published two sets of concerti grossi by Geminiani in 1732–3 which he had also acquired illegally. Unlike Handel, Geminiani took Walsh to court and finally came to an agreement with the publisher whereby he could proof-read any further publications in order to prevent unauthorised works being issued. Nevertheless, the publication of string concertos ‘after the Italian manner’ was financially good business, and since Handel’s royal privilege for printing music (granted to him by George I in 1720) was due to expire on 14 June 1734, Walsh lost no time in advertising a new set of similar concertos by London’s leading resident composer.

Walsh cunningly adopted a very misleading title page for these concertos, proclaiming a string scoring identical to Corelli’s. Nothing could have been further from the truth since they all make extensive use of wind instruments, and even in 1784 they were known (also inaccurately!) as ‘Handel’s Oboe Concertos’. Furthermore, the fourth concerto in Walsh’s first print is probably not by Handel at all, and at the composer’s request it was replaced, in a second printing a few months later, by an authentic work. We have recorded both of those concertos on this disc; the authentic replacement concerto being called ‘4a’ and the spurious original concerto ‘4b’. In fact a manuscript dated 1727 in the Earl of Malmesbury’s collection contains four of the present concertos in their complete form (Nos. 1, 2, 4a and 5) and since various other borrowings can be dated back as early 1712 (Il Pastor Fido), we can confidently conclude that all six authentic works were composed by Handel circa 1712–1724.

Concerto No 1 is scored for two recorders, two oboes, two bassoons, strings (with divided violas) and continuo. It is probably the earliest concerto in the set, although the oldest surviving manuscript score is circa 1724. The imaginative recorder parts in the Largo would probably have been played by one oboist and one bassoonist, who would otherwise be tacet. The disproportionate length of this movement, and the fact that the short final Allegro (featuring the two bassoons) does not return to the home key of B flat major, would suggest that this work may not represent Handel’s final intentions.

Concerto No 2 is scored for two oboes, one bassoon, strings and continuo. The first and third movements here are derived from Handel’s manuscript for the Brockes Passion (c1716). The scoring of the Largo is again notable for an oboe melody of exquisite beauty accompanied by two solo cellos and strings, and the fourth and fifth movements are respectively a Minuet in 3/8 time and a lively Gavotte with variations. This work seems to benefit from a slightly larger ensemble so we also doubled the wind parts in the tutti sections.

Concerto No 3. There is little doubt that this concerto was compiled by Walsh himself—the Largo, Allegro and Adagio are derived from the opening movements of an anthem and a Te Deum which Handel composed for the Duke of Chandos, and the final Allegro from a harpsichord Fugue in G (HWV252, 281 and 606 respectively). These were composed in 1717–18 at a time when Handel had very small instrumental forces at his disposal. There are several clear errors in the transcription and engraving of this concerto which we have corrected where appropriate. Some of the poor part-writing in the final Allegro has been improved (including the missing bar 81!) but we decided that a completely new transcription was undesirable. Walsh labelled the solo part for ‘Flauto traversa or Hautboy’ and we have opted for the more appropriate flute version accompanied by a solo string quintet and continuo. This is the first recording in this scoring and the result is one of both lightness and clarity.

Concerto ‘No 4a’ is scored for two oboes, one bassoon, strings and continuo. It is probable that this concerto was first performed during the opera Amadigi on 20 June 1716 ‘for the Benefit of the Instrumental Musick’ at the King’s Theatre, Haymarket. As an integral work for a specific occasion it is an unusually special and unified piece, displaying to advantage almost every facet of Handel’s concerto grosso style.

Concerto ‘No 4b’. The scoring is the same as ‘4a’. Walsh included this concerto in his first print of Opus 3 but withdrew it a few months later (possibly at Handel’s request) and included it in his third collection of Select Harmony (also 1734) where it appears anonymously alongside concerti by Geminiani and Giacomo Facco. In fact it is a delightful work, displaying many Handelian characteristics (albeit Italian) and deserving much greater recognition.

Concerto No 5. The scoring is as for ‘4a’ (except originally only one solo oboe part). Walsh’s first print only included the first two movements of this work, but since it was known in its entirety by 1727 Handel probably requested that it be reprinted in full. As with Concerto No 3 the first, second and fourth movements are derived from anthems for the Duke of Chandos (HWV247 and 251b) but the Adagio (played by single strings) and final Allegro ‘alla breve’ are original. In 1923 the first movement was transcribed for orchestra by Sir Edward Elgar.

In Concerto No 6 the scoring is as for ‘4a’ with solo flute (and solo organ in the appendix). The first and third movements presented here come from Handel’s Overture and ‘Battle Symphony’ for his opera Ottone (1722). The slow movement, specifically for flute, violin, archlute, cello and double bass, is to be found together with the third movement (and a dubious introduction) as an Overture in D (HWV337) in a manuscript at The British Museum, London. Although not proven, it seems likely from a detailed study of the paper of the autographs that these three movements belong together. In Walsh’s original publication only the first movement appeared, coupled incongruously with our appendixed Allegro, actually Handel’s first published organ concerto. This latter movement first appeared (scored with solo violin) at the end of the Overture to Il Pastor Fido (1712) but was probably used by Handel in one of his oratorio performances during 1733–34. Several corrections have been made to the solo part of this movement, although we have retained the spurious bar 51—which Walsh added in all the partbooks at the point of a page-turn in the solo organ copy, where he amusingly prints ‘volto subito’!