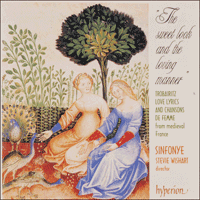 The sweet look and the loving manner

‘I'm not sure what medieval ears would have made of it but there's no denying Sinfonye's capacity for alerting us to a small but distinctive repertoire from an age and mentality essentially no different from our own’ (BBC Music Magazine Top 1000 CDs Guide)
‘The disc is irresistible. The singing and playing are ravishing, the sound immediate and caressing. This month's list is full of unfamiliar things but this may be the loveliest’ (Fanfare, USA)

Mores of medieval Provence, the region of France now known as Occitania, gave women a degree of political and creative freedom which appears to have been far greater than in most other times. The twelfth and thirteenth centuries are often seen as something of a renaissance for women and, not surprisingly, it is from this time that we have inherited songs by over twenty female troubadours, known as 'trobairitz' and cited as such in the romance Flamenca (c1250). Their lyrics are particularly poignant as the only female witnesses we have from a courtly milieu whose codes of love still resonate in modern times. The troubadours usually composed their courtly lyrics to fulfil a commission for a particular patron or patroness, but it seems more probable that the much smaller group of trobairitz were wealthy and well-educated women of high social standing whose songs tend to fulfil a more personal expression of the joys and ardour of fin 'amor. Only a small proportion of troubadour lyrics survive with their music, and sadly this is also the case with the trobairitz, for it is only the Comtessa de Dia's most famous love song A chantar m'er (recorded by Sinfonye on Bella Domna, Hyperion CDH55207) that has its melody intact. However, to a certain extent there was some independence between the transmission of the poetry and music. Numerous Occitan songs share the same poetic structure, with an identical number of lines per stanza and number of syllables per line, and even share the same rhyme scheme. It was therefore possible for medieval poet-composers to set their lyrics to a pre-existing melody. This practice of contrafacture was well known throughout the Middle Ages and makes it possible to perform certain of those trobairitz songs which have only their words extant, but replicate the exact poetic structure of another song which has come down to us with its melody intact.

There are four dialogue songs conducted solely between trobairitz, and our opening pair of tensos share identical metrical structures with troubadour songs. Na Carenza steps outside the usual rhetoric of the courtly love song with two sisters asking questions of marriage and childbirth. There are a number of possible contrafact melodies and Aimeric de Peguillan's Atress-im pren com fai al jugador is particularly arresting with its unusual use of Phrygian mode. It is interesting to find that the contrafact melody for our second trobairitz dialogue also shares similar distinctive melodic features with its initial use of phrygian intervals. This two-stanza cobla takes up the conventional themes o f fin 'amor with one trobairitz, Iseut de Capio, asking her colleague, Almuc de Castelnau, to forgive a deceitful lover and end his suffering. The source of this contrafact is Uc de Saint Circ's Anc enemics q 'eu agues.

The majority of tensos are in the form of courtly debates between two troubadours, or occasionally the stanzas alternate between male and female protagonists. In Bona domna the troubadour Pistoleta debates with an anonymous trobairitz, and this tenso has a particularly convincing contrafact melody as it accompanies another song which is again by Pistoleta. There are two versions of this exquisite melody. We perform the one from the St Germain Chansonnier as a fiddle prelude to introduce the complete song which uses the version from the Cangé Chansonnier.

We also include two works by trobairitz poets who adopt the more serious high style love song which is known in Occitan as the canso. One of the most controversial is attributed to the trobairitz Beatritz de Romans who addresses her sentiments of fin 'amor to another woman, Na Maria. Although there is no exact contrafact, the unique nature of the text warranted its inclusion. Gaucelm Faidit's canso Mon cor e mi e mas bonas chansos mirrors the poetic structure of Na Maria almost exactly, needing only slight modification of its melody to accommodate an extra syllable in the final pair of lines of Beatritz's stanzas. Our second canso fares rather better, having two possible contrafact melodies attached to poems which both replicate its structure throughout. Estat ai is one of the five extant cansos by the Comtessa de Dia and is sung to the melody of Bernart de Ventadorn's canso Non es meravilla s'eu chan which survives in different versions in the Milan Chansonnier and Chansonnier du Roi. We perform the former rather engimatic melody as a prelude to the Comtessa's canso. Her song expresses the conventional courtly epithets of unrequited love but with a directness and passion that seem particularly characteristic of the Comtessa's poetic style.

The Occitan love songs tend to adopt through-composed melodies which are often musically adventurous and highly sophisticated, reflecting the ingenuity of their texts. The songs of the northern courts rework some of the sentiments of their southern predecessors, but are often more immediately accessible with a narrative theme, less rhetorical or poetically complex texts which are often refrain-based, and easily memorable melodies. The chanson de femme and chanson de toile both adopt the convention of having female protagonists, but are usually anonymous and may be of male or female inspiration. Complaints of an unhappy wife ('mal mariée') abound, often as comical send-ups, as in the dance-song Soufrés, maris, but often with more serious undertones as in Por coi me bait mes maris?

In the more elabourate women's song Bele Doette the singer communicates some of the more personal emotions expressed by the southern trobairitz, but now set in the form of a short narrative. This is an archetypal tale which unfolds with a young noblewoman musing over her lover who is tourneying in distant lands, and develops as a tragedy when the squire brings news of his death. Out of her grief she decides to establish an abbey for, as in the real world, the cloister was one of the few alternatives to marriage open to noblewomen during the Middle Ages. There are also isolated examples of female trouvères from the northern courts. Both Blanche of Castile and Marie de Dregnau de Lille have songs attributed to them, and although only the opening stanza of Marie's chanson is extant, its melody is also included. We perform Mout m'abelist instrumentally at the head of our final sequence of melodies based on three chansons de femme, Bele Emmelos, Avant hier, and Li debonnaires Dieus.

The musical notation of this entire repertory does not indicate metre or clear rhythmic information. The highly refined chansons and tensos are sung syllabically in a free metre to maximise the nuances and word-play of the poetry, whereas our instrumental realisations are more often metrical as our concerns are purely melodic. The simple refrain-based dance songs such as the sequence beginning with Soufrés, maris obviously sound convincing with a strong metrical interpretation, in this case emphasised by the frame-drum. Our texts of a second group of pastoral caroles beginning with C'est la gieus are in Jean Renart's Guillaume de Dole. Renart describes his young courtiers singing and dancing caroles, sometimes with a fiddle which we use to bring out the alternating refrains. The melodies of these dance songs can be reconstructed from motets which incorporate their refrain-lines. We include one example, Tout leis, which follows our two intrumentally-performed motets based on chanson de femme themes, and incorporates the refrain from the carole C'est la gieus. Because of the melodically repetitive form of the carole, the entire dance song can be reconstructed from the full (final) refrain-line.

For the instrumentalist, the realisation of the melodic line (whether texted or untexted) is far more subjective than for the singer who is safely anchored to the words. Performing on historically accurate instruments and following their individual structural idiosyncrasies are obviously crucial reference points, as are the tunings described in treatises of the time, which in the case of the fiddle are particularly detailed. Descriptions of music-making in twelfth- and thirteenth-century romances and treatises include important hints at how we can reconstruct certain performance practices today. These include references to how an instrumentalist would accompany a song, with a prelude or postlude, presumably with improvisations based upon the vocal melody, as well as those citing more detailed procedures such as fifthing techniques (accompanying the melody in parallel fifths.) The performance of trobairitz songs is particularly difficult to ascertain, since their content and poetic style seem somewhat outside the conventions of traditional fin 'amor and this freedom of expression may also have repercussions for their manner of performance. We decided to keep the high style canso Estat ai unaccompanied, but used the fiddle to accompany Beatritz de Romans' unconventional canso and also included solo instrumental textures to distinguish the different personae of the dialogue songs.

When accompanying the voice, solo instrumental textures seem most appropriate, as suggested in literature of the time, but when released from following the poetry we have expanded our instrumental realisations more freely, as in the improvisations framing our opening pair of trobairitz tensos and in our closing sequence of chanson de toile melodies. Another plausible practice my have been for a fiddle player to adopt the favourite intrumental form of the time and improvise an estampie based on a song tune in his or her repertory. In our estampie the sequence of melodic phrases (puncta), and its linking open and closed endings are derived from the melody of A chantar m'er.

The instruments
Our instrumentation and musical arrangements are guided as much as possible by musical theorists and descriptions of musical events in romances and epics of the time, whilst also being inspired by related surviving musical traditions. The refrain-based songs with their catchy melodies are set off well against drones and are particularly associated with instrumental participation. Besides the voice, which was held in highest esteem, the medieval fiddle was considered one of the most expressive sonorities and particularly suited to accompany the singer, since by bowing its string the player could emulate the expressive potential, and sustain, of the human voice. It is a precursor of our modern violin and has a virtually flat bridge and gut strings which are bowed together so that the melody becomes interwoven among open drone strings.

The 'sinfonye' (hurdy-gurdy) has a distinctive wheel which when turned acts like a continuous violin bow, sounding various combinations of melody, drone and percussive strings while the melody is simultaneously stopped by the player's other hand. Like the sinfonye, a number of frame drums have survived as folk instruments. Both the round- and square-frame drums represented in manuscripts and sculptures from the late twelfth century onwards exist in various forms today, and include round drums common to north Africa and India, and the square pandeiro, found in northern Spain and Portugal. Likewise the medieval lute is much the same instrument as the Arabic oud and has survived as a classical instrument among many Islamic cultures.

Our instruments are strung entirely in gut or silk and adopt medieval tunings which indicate courses (double strings) on the fiddle as well as the lute.