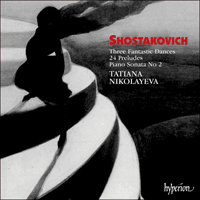 So far as the general musical public is concerned, the reputation of Dmitri Shostakovich as one of the twentieth century’s great masters rests principally upon his fifteen symphonies and fifteen string quartets, together with several of his concertos and a handful of other works. The Shostakovich specialist, however, will know that apart from these forty or so compositions there are another hundred or more which, the moment one begins to examine them, show this unique composer in a number of different guises.

Shostakovich’s music exhibits a range of paradoxes which can be observed in an important, albeit comparatively small, part of his total output, his compositions for solo piano. Shostakovich was himself a fine pianist: in 1927 he won a prize at the inaugural Chopin Piano Competition in Warsaw (playing the first Concertos of Tchaikovsky and Prokofiev); yet for all his evident ability he composed comparatively little for the piano. This is the first paradox—that of a composer who was also a pianist of high technical ability but who left a comparatively small output for the instrument; and although we can safely assume that his piano music is written with a deep knowledge of the instrument, within that output we find works which are world famous and others which have remained virtually unknown for decades.

Shostakovich’s solo piano music is dominated by the 24 Preludes and Fugues which form his Opus 87 and which date from 1950 and 1951. They constitute virtually Shostakovich’s last word on the solo piano as a medium, the summation of his piano writing which began, so far as can be ascertained, about the middle of 1918, when he was approaching his twelfth birthday.

Three short pieces for solo piano (the last unfinished) by Shostakovich were found amongst the papers of the Petrograd Conservatory Professor of piano Alexandra Rozanova, for whom Shostakovich had played in the spring of 1917 whilst still a pupil of Gnessin Music School. He entered the Conservatory in 1919, studying piano with Leonid Nikolayev (in whose memory he was to compose his Second Piano Sonata); a year later, 1920, he took his first lessons in composition with Maximilian Steinberg and began his acknowledged list of works, completing Eight Preludes for piano as his Opus 2, only five of which were published during his lifetime, and then not until 1966. Later, around 1920/21, Shostakovich wrote eight further Preludes to form part of a set of 24, the composition of the other sixteen being shared equally between two fellow students, Pavel Feldt and Georgi Klements. Like the Opus 2 set, these remained unknown until 1966 when five were published as a group.

Three Fantastic Dances Op 5 (1922)
Whilst it is tempting to imagine that these three brief pieces could have been the ‘lost’ three from the set of eight Preludes of the previous year, perhaps recomposed, the fact that they are genre—and not abstract—pieces disabuses such a view. In addition, they exhibit far greater tonal freedom than the earlier pieces and are obviously the work of a more experienced composer—aged sixteen! Curiously, Shostakovich was reluctant to see these in print, also: they were not published until 1937 (although one source claims 1926 as the date of publication); the Dances did not appear in print in the USA until 1945. Further confusion surrounded them, for they were originally published as his Opus 1 (which is an orchestral Scherzo in F sharp minor).

However, the set of Three Fantastic Dances (which is dedicated to a fellow student, Joseph Schwarz) received its first performance in Moscow on 20 March 1925 at an all-Shostakovich recital (which also included the first performances of the Suite for Two Pianos opus 6, the First Piano Trio Opus 8 and the Three Pieces for cello and piano opus 9).

The opening March is reasonably firmly anchored to C major, and via the leading-note (B) tends to gravitate towards the flat supertonic, producing piquant cadences. G major, the key of the central Waltz, is initially approached obliquely, and this curiously haunting little fragment is the first of many highly un-Viennese waltzes Shostakovich wrote throughout his career. The final Polka is another ‘first’, as this also later became a much-favoured dance form for the composer. But already, this is the fully formed musical character of Shostakovich, one of the most distinctive voices in twentieth-century music.

Twenty-Four Preludes Op 34 (1932/3)
Shostakovich’s 24 Preludes for solo piano were composed within a relatively short space of time during the Winter of 1932/3. Each is dated, and the music would appear to have been written in the order in which they are published, with virtually a Prelude a day at first, from 30 December until 2 March. This was also to be the case with the 24 Preludes and Fugues opus 87, with both works forming cycles in each of the 12 major and minor keys. Although the opus 34 Preludes are often performed separately, or as selections made into a group, the manner of their composition and the cycle of ascending fifths they encompass (the major key, beginning with C, followed by the relative minor: thus, the first is in C major, the second is in A minor; the third in G major, the fourth in E minor, and so on—a process Shostakovich adopted also in Opus 87)—these factors imply they are better perceived as a set, although the composer only recorded selections himself, not a complete cycle.

The 24 Preludes followed the composition of a large amount of incidental and film music, as well as that of the massive opera Lady Macbeth of Mtsensk District—all written between October 1930 and the autumn of 1932. During this longish time, therefore, Shostakovich had not only written a great deal of orchestral music but also had perforce been away from his own instrument—at least with regard to original compositions. Compared with the ‘public’ nature of the theatre and film music, the Preludes are withdrawn, intimate (as with opus 87, which formed an oasis of ‘private’ writing amidst much offical and film music composed between 1949 and 1951). Although the nature of the Preludes is brief and aphoristic (but unlike Shostakovich’s Opus 13 Aphorisms for piano), they form a link with his very next composition, the First Piano Concerto, which he began a mere four days after completing the Preludes.

Each of these 24 short pieces is clearly defined in mood and character—many of them are only a page in length—but so clear]y distilled is the essence of each one that their memorable individuality is immediately displayed. One should mention that a fair number of these Preludes have been transcribed for forces as different as large orchestra, symphonic band, clarinet and orchestra, and violin and piano. Of the orchestral versions one should perhaps note that of No 14 in E flat minor by Leopold Stokowski, who made his transcription a few weeks after the published set of opus 34 appeared in America; by the end of 1933 his orchestration had been recorded and issued as ‘fill-up’ to Stokowski’s premiere recording of Shostakovich’s First Symphony—odd that the first recording of any of these pieces should be in an arrangement. But whatever the length, and whatever the medium, each is further proof, if it were needed, that Shostakovich was able to distil his genius into the shortest time-span, as well as to fill the vast canvasses of his large-scale symphonic music.

Piano Sonata No 2 in B minor Op 61 (1943)
As a general rule, Shostakovich tended to place the greatest emphasis with regard to emotional content and depth in the first movements of many of his works, and reserved in the main a mood of relaxed optimism, less profound than in the opening movements, for his finales. This of course was by no means unusual but curiously, in the Second Piano Sonata, composed in 1943 and premiered by the composer himself on 11 November of that year, it is the finale which is by far the longest movement, and the first movement—the fast-moving yet paradoxically-marked Allegretto—appears, in retrospect, to be the least important.

This is more apparent than real, however, for the fleet pulse of the first movement is not a barnstorming, noisy parade, but is more akin to the swift thought of intense concentrated activity. It is salutary to compare this movement (indeed, one could with profit do so by using the entire Sonata) with Shostakovich’s more ‘public’ compositions of the same period, notably the Eighth Symphony (completed a few months after this Sonata) in which a similar profound impression is conveyed through broadly identical processes. Indeed, the structural device of placing the emphasis on the finale was carried a stage further in the Second Piano Trio opus 67.

The second movement, a lamenting Largo, forms the perfect foil to the fleet music of the first movement, but it is much more than that. As mentioned earlier, and like the Second Piano Trio, the B minor Sonata is a memorial work. It is dedicated to the memory of the Russian piano pedagogue and composer Leonid Nikolayev, who had died in October 1942 at the age of 64 in Tashkent (to where he had been evacuated following the Nazi invasion in 1941). He had been one of Shostakovich’s early teachers at the Petrograd Conservatory (he had been a professor there since 1906); in the Largo movement of this Sonata it is certainly not too fanciful to feel that this deeply affecting creation is a searching lament for this noble musician.

The relative clarity of the Sonata’s tonal structure acts as an anchor throughout the work: reasonably firmly rooted in B minor, it is the home key which pervades both the first movement and the finale; the Largo falls to A flat major/minor—the same interval, the minor third, from the tonic B minor which marked the opening of the Sonata’s first theme. The tonality now rises for the extended finale. The first themes of each of the Sonata’s three movements stretches the intervals—the first began with a minor third, the second with a falling fourth, the finale with a rising fifth—and this remarkable concluding movement could possibly stand as a separate piece, as an extended set of variations upon a lengthy, winding and curiously memorable theme (as it is fashioned from scraps of ideas). The moods in the finale are wide-ranging yet are impacted and continuously flowing. It is only with the concluding pages that the entire strands of the Sonata are at last brought together in a masterly act of synthesis: the swift semiquavers of the first movement are combined with the solemnity of the Largo through the main theme of the finale. It is a very remarkable compositional achievement, one’s only regret being that Shostakovich did not explore the piano Sonata medium as thoroughly as he did that of the symphony and string quartet.