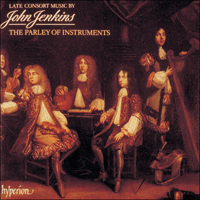 ‘The Parley … play superbly well, their sprung, alert performances bringing the music sparklingly alive. This really is life-enhancing stuff which will lever the cares of the world off your shoulders’ (CDReview)

John Jenkins received his first Court post in the spring of 1660, on the Restoration of Charles II to the throne. He had been born in 1592, the son of a Maidstone carpenter, and had spent the bulk of his career on the periphery of England's musical affairs—mainly, it seems, in remote country houses in East Anglia. His belated Court post was as a lutenist in the Private Music, the select group of musicians whose job was to provide the monarch with music in his private apartments. Most Court musicians worked in large ensembles in the public areas of Whitehall Palace: in the Chapel Royal, the Twenty-four Violins (the court string orchestra), the royal trumpet band, and the various groups of wind musicians. The Private Music, by contrast, consisted of a flexible group of distinguished soloists—singer-lutenists, viol players, keyboard players, a harpist and two violinists—who could be assembled in varied chamber combinations, or were available to teach members of the royal family music.

The violinists were there to play contrapuntal consort music in mixed groups of violins and viols with keyboard and/or theorbo accompaniment. Until about 1620 the violin had been used in England almost exclusively for dance music, but Orlando Gibbons, Thomas Lupo and John Coprario, working in the household of the Prince of Wales, the future Charles I, began to use the instrument in contrapuntal chamber music, devising new forms and scorings in the process. (Some of the music Lupo and Gibbons contributed to this repertory can be heard on Music for Prince Charles, Hyperion CDA66395.) Coprario's contribution was the `fantasia suite', the name given in modern times to a fixed three-movement sequence consisting of a contrapuntal fantasia and two dances, an alman and a galliard, scored for one or two violins, bass viol and chamber organ. Coprario's fantasia suites were played at Court until the Civil War, and his pupil William Lawes added to the repertory in the 1630s. The fantasia suite was largely a Court genre until it was disseminated into the wider musical community in the 1640s and '50s, though Jenkins seems to have known and imitated Coprario's works early on; it is likely that he was working in London on the fringes of the Court in the 1620s. Jenkins wrote more fantasia suites than anyone else—about sixty are known as well as more than twenty fantasy-air pairs—and he developed the form in various ways. His early fantasia suites are relatively simple, and use the scorings established by Coprario, though it is likely that they were played outside the Court with the violins replaced by treble viols. In his fantasia suites of the 1640s and '50s, however, he began to expand the dimensions of his fantasias by introducing sections of virtuoso passage-work or divisions. It is often thought that these `high-flying' works (to use the term coined the writer Roger North, a pupil of the composer) were intended for violins, but in England the connection between virtuosity and the violin had yet to be established, while viol playing had reached a high technical standard. Jenkins was a virtuoso viol player himself, and is known to have played the treble. He also invented new scorings for the fantasia suite. To the two used by Coprario (treble, bass and organ, and two trebles, bass and organ) he added three more: treble, two basses and organ, two trebles, two basses and organ, and three trebles, bass and organ.

Dating Jenkins's fantasia suites is not easy, for none of them were printed, and the few dates that appear in the manuscripts seem to refer to the work of copyists rather than the composer. Nevertheless, there are good reasons for thinking that the suites on this record, drawn from the sets for two trebles, two basses and organ, and three trebles, bass and organ, are late works, written probably in the early 1660s for the violinists of the Restoration Private Music. They have continuo parts rather than the written-out organ parts that were used in earlier fantasia suites (and English consort music in general). By and large, English organists do not seem to have used figured bass until about 1660. The third movements are cast as corants, rather than the galliards of Jenkins's early works, and some of the three-violin suites even end with the new-fangled saraband—the only examples in the genre.

The division writing in the fantasias of these suites is also less complex than in the 'high-flying' works, and is more thoroughly integrated with the contrapuntal material, producing structures similar to mid-century Austrian and German sonatas. Significantly, trio sonatas by Clamor Heinrich Abel, Johann Michael Nicolai and Johann Heinrich Schmelzer were copied alongside music by Jenkins (including the three-violin suites) in a collection owned by the North family, who employed Jenkins in the 1660s. A good example is the fantasia of the Suite No 8 in D for two trebles and two basses, with its walking bass lines, its clear directional harmony, its idiomatic violin writing exploiting open strings, and its graceful passage of triple time, with descending harmonies recalling the passacaglia ground bass. The fantasia of Suite No 6 in F from the same set is much more old-fashioned, and may have been borrowed from an earlier work. Half-way through it plunges into remote flat keys outside the narrow band of harmonies encompassed by the mean-tone tuning of contemporary keyboard instruments. Jenkins was fond of adventurous modulations of this sort (some of his fantasias go right round the cycle of keys) and would have expected the cloudy and dissonant tuning of the organ (to which the string players have to conform) to add to the strange effect. To compensate for the lack of divisions in this fantasia, Jenkins followed it with a brilliant and extended alman—a delightful and unexpected touch.

The strongest argument for associating Jenkins's three-violin suites with the early Restoration Court is their scoring. The sonorous combination of three violins and continuo was brought to England by the German virtuoso violinist Thomas Baltzar, who arrived in London from his native Lübeck in the winter of 1655/6. Baltzar's Court appointment in the summer of 1661 increased the number of violins available in the Private Music from two to three, at least until his early death in July 1663. The cover of this recording, the painting traditionally called The Cabal by J B Medina, seems to be a joint portrait of the group at the time, with Baltzar and John Banister seated at the front, left and right respectively. Baltzar's fine Suite in C for three violins and continuo (recorded in part on Hyperion CDA66108) must have been written for the group, and the same is probably true of the set of ten suites by Jenkins for the same combination. These delightful pieces have few divisions and are largely concerned with exploiting the rich sonorities of the medium—as in the beautiful `sunrise' opening of No 8 in C—and with surprising the ear with unusual turns of harmony—as in the turn from E minor to E major at the end of the fantasia of the Suite No 10, artfully mirrored by a similar modulation at the end of the succeeding alman. Baltzar and Jenkins were friends, and Roger North wrote that the German's playing inspired the old composer to try `to compass the violin in his old age, which he did so far as to perform his part, but how well handed, any one may conceive'.

Jenkins's lyra consorts are also difficult to date. They survive in late copies, mostly owned by the North family, and may well have been played at Court after the Restoration, though some of them seem to be reworkings of earlier pieces with more modest scorings. The genre, which was probably invented by Jenkins, is essentially two-part music, with the gap between the tune and bass filled in with a `continuo' of lyra viol, theorbo and harpsichord. In fact, the lyra viol (a small bass viol played in a chordal style from tablature notation using variable tunings) often has significant melodic lines, sometimes soaring up to act as a second treble, while the harpsichord part is written out in skeleton form, and occasionally has independent material—notably in 'The Mourners' section of 'The Six Bells'. Jenkins does not provide a separate part for the theorbo, but the instrument seems to have been a regular part of the lyra consorts. Thomas Mace wrote in his Musick's Monument (London, 1676) that 'Ayrey, Jocond, Lively, and Spruce' consorts required a harpsichord rather than an organ, and added: `We always added to This Consort, the Theorboe Lute'. 'The Six Bells' opens with an lively alman, which is followed by a passage imitating change ringing on a peal of six bells. The music moves suddenly into the minor for 'The Mourners', with its hint of a tolling funeral bell, and back into the major for 'The Ringers', which perhaps illustrates the bellringers enjoying themselves in the tavern. The piece is connected in an unusual way with Jenkins's better-known 'Lady Katherine Audley's Bells'. Like different wine poured into similar bottles, the two pieces are not related in their melodies or harmonies, but illustrate the same programme, and are laid out with virtually the same pattern of sections.

This recording has been made to mark the 400th anniversary of the birth of John Jenkins. It is dedicated to Andrew Ashbee, who has been the prime mover in the modern revival of a great English composer.