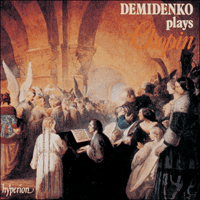 ‘You will be hard pressed to find playing of such super-fine precision and sensitivity. This is undoubtedly one of the most crystalline and exclusive Chopin recitals I have heard for some time. Such pianism forbids even whispered comparisons’ (Gramophone)
‘Demidenko's free-flowing virtuosity in such comparitive rarities as the Allegro de concert and Tarantella carries all before it, perfectly offset by the delightful polonaises and a sublime rendering of the Berceuse’ (BBC Music Magazine)
‘The performances are illuminating and perceptive in a grippingly intellectual way’ (The Scotsman)
‘One of the finest pianists of our time’ (CDReview)

’Heroic hymns of battle’ was how the American critic James Huneker visualized Chopin’s polonaises. ‘In them’, Liszt wrote evocatively in his Life of Chopin, ‘are to be found embodied the noblest traditional feelings of the Poland of a bygone age; through them breathe the stern resolve and the reflective gravity of the Poles of other days. Usually of a warlike character, bravery and valour are in these polonaises rendered with a simplicity of expression which was a distinctive characteristic of this warlike people. They bring before the imagination with vivid intensity the ancient Poles as they are described in their chronicles.’

Charmingly elegant creations of a seven-year-old, Polonaise No 11 in G minor and Polonaise No 12 in B flat major date from 1817, the former (Chopin’s earliest known piece) being published in Warsaw around the time of its composition, the latter in Cracow in January 1934 (in a facsimile of a copy written out by the composer’s father). Written in April 1821 and dedicated to Chopin’s music master Wojciech Zywny, Polonaise No 13 in A flat major was first printed in 1902. Delicate, ornamental, an aspiring trialogue between harmony, phrase and melody, not all its concern is with the common coinage of its place or period. The independently imagined D flat subdominant aside in bars 17 to 20, for instance, clearly looks to another time and environment. Paderewski’s editorial tempo (Animato) seems brisk, his dynamics fussy, for the simple grace of what Chopin offers us.

Polonaise No 14 in G sharp minor was composed in 1822 and first published in 1864. Dominated by arpeggiated figuration and decoration (at the expense, arguably, of melody), its orbit is one essentially of elegance rather than impulse. Polonaise No 15 in B flat minor was penned on the evening of 27 July 1826 – the day before Chopin’s departure for the spa town of Reinerz where he was to begin his summer holidays. He and a schoolfriend, Wilhelm Kolberg, had just been to a performance of Rossini’s La Gazza Ladra at the Warsaw Opera, an occasion recalled by the D flat trio (headed ‘Au revoir!’) which quotes one of Kolberg’s apparently favourite moments, the Act I cavatina ‘Vieni fra questa braccia’.

Polonaise No 16 in G flat major dates from the first half of 1829, sometime before Chopin left Warsaw for Vienna. First engraved in 1870, it was a work known to Chopin’s sister Louise (who listed it in her manuscript catalogue of his compositions). Niecks, however, felt compelled to question its authenticity: ‘Nothing but the composer’s autograph [lost] would convince one of the genuineness of the piece.’ By comparison with Chopin’s earlier attempts at the form, its ideas seem relatively leisurely and less short-winded.

Standing at the other end of Chopin’s life, the Polonaise-Fantasy in A flat major, Op 61, was composed between the autumn of 1845 and the summer of 1846, during that period when the long relationship between the composer and George Sand (and her two children) was in a crisis state of unrest, violence and progressive break-up. Chopin once claimed he would make changes to the polonaise form until he died. With the Polonaise-Fantasy he replaced the ballroom, the salon, model of his youth with a completely new kind of structural and expressive entity, one which, as Jim Samson has put it, ‘embraces a wide range of characters – slow introduction, dance elements, sonata-like development, nocturne-like ornamental melody, “slow movement” …’, the whole huge single-movement edifice held together by a deliberate sense of thematic unification and integration. Chopin’s critics, including Liszt, found fault with his design; these days its peculiar originality has begun to be understood.

In his biography of the composer (1947) the late Arthur Hedley wrote of Op 61 as an epic in whose last pages ‘Chopin bids farewell to his country’s heroic past. The cavalcade which he has conjured up seems to vanish across the plains, leaving him alone’. Perhaps. But we should not be misled. The Polonaise-Fantasy may be about things Polish, but it has always, too, been about matters universal. Even Wessel, who liked to give pretty titles to his London publications of Chopin’s works, seems to have sensed this: unadorned, his first edition of October 1846, predating Leipzig and Paris by a month, is without sobriquet.

Polonaises, mazurkas, waltzes, the krakowiak, the kujawiak: such are the dance types Chopin most frequently essayed. Bourrées, ecossaises, a tarantella, a bolero, are what he turned to for diversion. Conceived in the summer of 1841, the Tarantella in A flat major has the character of a brilliantly bravura, almost Lisztian, perpetuum mobile, ripe with harmonic pungency and chromatically frenetic unrest. Niecks could find little to admire; it was, he said, like ‘a transmutation of Rossini into Chopin, a Neapolitan scene painted with opaque colours, the south without its transparent sky, balmy air, and general brightness.’ Schumann believed otherwise: ‘This is in Chopin’s most daring manner; we see the madly whirling dancers before us, until our own senses seem to reel. We can scarcely term this lovely music, but we willingly forgive the master for the wildness of his imagination, the right side of which he may certainly be allowed to display sometimes.’

Surviving sketches for the Bolero in A minor in the Paris Conservatoire indicate a composition date of around 1833 – which makes it contemporary with drafts for the G minor ballade and the Op 25 studies. C F Peters of Leipzig published it first in October 1834, with Wessel of London issuing an edition the following August under the title Souvenir d’Andalousie. More Spanish than a polonaise, more Polish than a bolero (hence Nieck’s tag, ‘Bolero à la Polonaise’), its structure is that of a rondo in A minor/major prefaced by a brillante introduction in C major. Polish is the rhythm of its accompaniment. Iberian is the Aeolian flattened 7th modality of its refrain and the nature of its metric stress (in a true bolero all periods conclude on an assertive downbeat, in a polonaise they don’t, they favour the weaker accent – a nicety of cadencing Chopin observes with alacrity).

Drawing tangibly on material for the first movement of a concerto sketched in Paris in 1832, and tentatively on ideas for a concerto for two pianos discussed by Chopin in Vienna a couple of years previously, the Allegro de Concert in A major was completed in May 1841. References to its concerto genesis are found, overtly, in letters from Chopin’s father written in 1834 and 1835 (‘You don’t mention whether you have finished your third concerto’) as well as in Chopin’s own correspondence (where it is specifically identified as a ‘concerto’ in a missive to Fontana from early October 1841).

In this allegro, Schumann told his readers in the Neue Zeitschrift für Musik, ‘a fine middle melody is wanting, though the cantilena is rich in new and brilliant passages; but it floats past us too restlessly, and we feel the absence of a slow after-movement, an adagio – for the entire plan suggests a complete concerto in three movements. The idea of raising the pianoforte to the highest point of independence possible, and of rendering the orchestra unnecessary, is a favourite one with young composers, and it seems to have influenced Chopin in the publication of his allegro in this form; but this new attempt again proves the difficulty of the task, though it will by no means serve as a warning against future endeavours.’

Composed in 1843 and revised the following year, Chopin’s Berceuse in D flat major – with the barcarolle the pinnacle of his lyric art – has been described by Hedley as ‘one of those happy inspirations which can never be repeated’. Akin to the world of the nocturnes, its structure is a one-off, a set of sixteen variantes cradled by rocking tonic/dominant harmonies resting above a comfortingly repetitive tonic pedal-point. Extraordinary static calm is the impression of its tonal landscape (which, apart from a subdominant reference at the end to reinforce the home key, never once leaves D flat). Tracing, like Baroque ‘doubles’, arcs of climax and repose, of quickening and slowing note values, of changing motion against an unchanging pulse, its heart enshrines a poetry to defy analysis: ‘Who will cut open the nightingale’s throat to discover where the song comes from?’