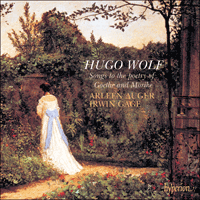 ‘This is the most satisfying solo disc Auger has made’ (Gramophone)

Eduard Mörike (1804–75) has been reckoned with Goethe and Rilke among the greatest of German poets. Yet his lyrics are limited in quantity if not in range, and like his life as clergyman and teacher they are outwardly uneventful. He has little of Goethe’s outgoing intellectual vigour, or of Rilke’s passionate quest for inward self-awareness. Instead, his poetry offers a quiet and seemingly passive quality which is easy to perceive but hard to describe. Imagination, religious devotion, realism and humour in the content of the verses, folk-song and the classical tradition in their forms, are some of the more evident components of this quality. But its precise definition has been the despair of students and examiners for years; and also of commentators and critics, to judge by the comparative paucity of published Mörike studies.

Something of its indefinable essence was conveyed by another of Wolf’s poets, Gottfried Keller, who when Mörike died said that it was as if a fine June day had passed away with him. That choice of simile was not merely conventional. Mörike was a painter and pastor as well as a poet; his pages are characteristically bright with coloured or shining pictures or visions of this world or the next. His drawings and sketches too, like his sermons and letters, are full of quirky yet warm-hearted insights into human feelings, expressed in vigorous and often homely images from daily life and the natural scene. This quasi-pictorial sense of communication also illuminates the vocabulary and imagery of Mörike’s main writings in poetry and prose, to give Keller’s ‘June day’ effect.

None of these images implies a mere one-sided or superficial geniality. Mörike has also a dark and daemonic aspect, especially noted and commented upon by Wolf in correspondence (e.g. about his own settings of Der Feuerreiter and Erstes Liebeslied eines Mädchens). Mörike’s own intuitive awareness of the occult and erotic worlds of ancient pagan worship and ritual, witchcraft and legend, had been further enhanced by daily experience of rural life in remote communities. The pastoral poet, like his parishioners, was close to the instinctive springs of feeling; and these too find their own typical diction and imagery in the dark flowing of subterranean streams, the irresistible surge of storm-winds. Between the two realms of bright open day and dark secret night lies the much prayed-for Mörikean resting-place, his ‘holdes Bescheiden’ or golden mean of Verborgenheit. In his poetry, time itself stands still in contemplation at dusk or dawn.

In all this Mörike displays clear temperamental affinities with Wolf. Their unworldliness often left them both dependent on the bounty of friends or the hazards of circumstance. Their creative minds shared a similar polarization of mood-swing from dark trough to bright crest, from apathy and inertia to frenzied and elated composition. Each felt a strong affinity with nature and intuitive feeling; each rejected anything contrived or mechanical; each identified with patterned contrasts of storm and calm, flowering and fading, travel and homecoming; each saw human life and experience in visual and dramatic terms. And all this was as readily expressible for Wolf in musical as for Mörike in poetic structure and imagery.

It is not surprising then that the verbal warmth and fire discerned by Keller in Mörike should have inspired Wolf to his sudden quasi-Pentecostal release of creative genius in 1888. The surprise is rather that other song-writers in former years, or Wolf himself at an earlier stage, should not have been similarly inspired. After all, Mörike’s poetry had by then been in print for well over half a century; composers from the pioneering Schumann and Robert Franz onwards, including Brahms, had already set it to music. By the time that Wolf first read Mörike, in the 1870s, the words of Das verlassene Mägdlein had appeared in some fifty published settings, and those of Agnes in more than eighty.

Mörike’s poems had first appeared in his Gedichte of 1838. This volume was enlarged and revised in three subsequent editions during the poet’s lifetime culminating in the final reprinted collation of 1873. The sixth edition of 1876 was Wolf’s constant companion. As he once told a friend, he could not bear to part from it, even for an hour. It contains some 275 poems, many of which are wholly unsuited, whether in length or style, to solo setting. Of the remaining two hundred or so, Wolf eschewed all epigrams, all the personal poetic addresses and letters to friends and family, and almost all the poems in classical metre. Of the hundred left, Wolf set more than half; and the poems he chose are not only fully representative but, with very few exceptions, contain a complete collection of Mörike’s finest lyrics. This songbook as a whole is unique for its absorption of the essence of one great poet’s work into music of comparable quality.

Johann Wolfgang von Goethe (1749–1832), poet, dramatist, novelist, painter, critic, scientist, philosopher and statesman, was the greatest and most universal genius of his time. His mind and work dominated two centuries of Europe from the prodigiously influential novel Werther, 1774, to the completion in 1832 of the towering drama Faust.

His poetry has Mörike’s qualities of humour, fantasy and beauty of imagery, together with an intellectual vigour, a range of vision, and a depth of understanding, with few parallels in the literature of the world. His poetic genius also irradiated and transformed the history of music, not only by providing ideas, themes and texts for so many overtures, tone poems, cantatas and operas but above all by projecting the written word so brightly into the musical mind of great composers as to create fused word-tone images and hence a new art form, the Romantic Lied. From Mozart’s Das Veilchen and Beethoven’s Goethe settings to Schubert’s Gretchen, Erlkönig and a hundred others the process is clear. The poetry of individual emotion and experience, rendered vivid by narrative or dramatic presentation, with strong or elevated feelings expressed in simple words, is translated into musical terms. Goethe himself notoriously approved of the subordination of music to words within the song form, and carefully cultivated the art and the society of like-minded lesser Lied composers such as Zelter. But he knew instinctively that a new art was about to be born, and may well have acknowledged his own paternity. In a letter to Zelter, he noted in general terms that no lyric poem was really complete until it had been set to music. ‘But then’, he concluded, ‘something unique happens. Only then is the poetic inspiration sublimated (or rather fused) into the free and beautiful element of sensory experience. Then we think and feel at the same time, and are enraptured thereby’.

It is significant that when Wolf himself came to comment on this composite aspect of his art it was in connection with his Goethe settings and his fear that because of their dual nature they had not been properly apprehended in performance. As he wrote to Melanie Köchert on 12 October 1890, ‘On the whole I gained the impression that I had not been understood, that my hearers were concerned too closely with the musical and had thus lost sight of what is new and individual in my musico-poetic conception’.

Throughout Wolf’s work, that conception is nowhere more difficult to grasp and evaluate than in the Goethe songs. One reason is that despite Goethe’s transcendent genius and deserved renown his poetry is so resistant to translation as to be all but inaccessible to English-speaking readers or listeners. This in turn is because the very qualities that make it so sweetly or sharply savoury in its native idiom may often taste insipid for alien tongues. The simple words remain, but their subtle and significant blends are all too easily lost. There are other difficulties. Goethe’s verse often seems too intimately connected with his life and thought, and their vast bibliography, to be readily communicable with the immediacy that the song-form requires. Further, Wolf’s selection was circumscribed by his own diffidence about setting poems already treated by his great predecessors; and in Goethe songs he had been notably anticipated by Loewe, Schumann and Brahms as well as Mozart, Beethoven and Schubert.

In the Goethe songbook Wolf strives to serve his poet’s cause by presenting his own work in structured groups corresponding to Goethe’s own arrangement, like a select anthology. The first ten poems occur as occasional lyrics in the novel Wilhelm Meisters Lehrjahre. This is especially memorable for the famous lyrics sung by the mysterious Harper and the child Mignon. Neither knows that Mignon is the Harper’s child by his own sister. This is the sin that has sent him wandering crazed through the world, far from his native Italy. His songs are heavy with guilt and despair. Mignon’s are full of secrecy, grief, and yearning for love and homeland. The sheer magnificence of Goethe’s poetry gives all these individual emotions a universal quality that speaks for mankind. Seven of these lyrics were included by Goethe in a separate section, ‘Aus Wilhelm Meister’, of the volume of poems (Gedichte, c1861) that Wolf seems to have used as his main source. Two others began the following group of some thirty ballads. From these Wolf selected four others for his songbook. But the Spottlied is not found in the Gedichte at all. So Wolf’s source for the Wilhelm Meister poems may have been the novel itself.