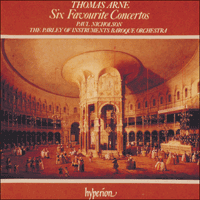 The keyboard concerto seems to have been invented independently by Handel and J S Bach. Handel wrote an experimental movement for organ and orchestra as early as 1707 in his Roman oratorio Il Trionfo del Tempo e del Disinganno (recorded on Hyperion CDD22050), but evidently only produced his first complete organ concerto in the early 1730s. Bach, meanwhile, had written his first experimental harpsichord concerto, the fifth of the Brandenburg Concertos, around 1720. The two types of concerto, English and German, were quite different in conception, and remained so for much of the eighteenth century. The German type was nearly always written for harpsichord, and was modelled on the three-movement solo violin concertos of Vivaldi. Indeed, most of Bach’s harpsichord concertos are simple adaptations of existing works, the solo violin part transcribed more or less literally for the right hand of the harpsichord.

The Handelian keyboard concerto, by contrast, was written first and foremost for the organ, though the harpsichord was always advertised in editions as an alternative. The organ had traditionally played a much more important role in secular music in England than in other countries, and large numbers of the English type of chamber organ – a small, usually single-keyboard instrument without pedals – were installed in concert rooms, theatres and private houses. The English keyboard concerto also differed from the Continental type in that it was modelled largely on the Corellian concerto grosso. This meant that Handel and his contemporaries rarely kept to the three-movement form, but often wrote as many as six or seven short contrasted sections, and felt free to include dances, sets of variations, fugues and even improvisatory solo movements. Also, the relationship between keyboard and orchestra tends to be less predictable: sometimes they alternate, like the concertino and ripieno of a concerto grosso, sometimes the strings accompany a florid right-hand part, as usually happens in the solo sections of Bach’s harpsichord concertos. Sometimes, as in the first movement of Arne’s Concerto No 4, the keyboard even accompanies solos in the orchestra, and the relationship becomes virtually as complex and flexible as in a Classical piano concerto.

The history of the English organ concerto really begins with the publication of Handel’s Op 4 in 1738 (recorded on Hyperion CDD22052). Within two years the first imitations appeared, by Henry Burgess and Charles Avison, and by the 1750s there was a considerable repertory available, though some of it consisted of simple arrangements of string concertos – several of Handel’s Op 6 were pressed into service, as were John Stanley’s Op 2 of 1742. At first, English organ concertos tended to be solidly Handelian in style, though some composers began to look abroad for models during the 1740s and ’50s – William Felton to Vivaldi, for instance, and Thomas Chilcot to Domenico Scarlatti. The range of idioms available to English composers increased in the 1760s when J C Bach popularized a galant type of keyboard concerto, though only the best composers, such as Stanley and Arne, had the imagination and technique to take advantage of the range of possibilities on offer. By then, too, the harpsichord and even the piano had become common alternatives to the organ.

Arne’s six keyboard concertos had a chequered history in the eighteenth century, and we are fortunate that they survive at all. They did not appear in print until 1793, fifteen years after the composer’s death, though a fascinating ‘advertisement’ in the edition tells us that he planned to publish them by subscription, but that ‘from some of those untoward circumstances, which are known to have generally attended this great man through life, the proposal was never printed’. After Arne’s death in 1778 his illegitimate son Michael also drew up proposals to publish them along with several of his father’s choral works, though once again the plan came to nothing, and he too died in 1786. Fortunately, the publishers Harrison and Co of Paternoster Row had acquired the autograph score of the concertos, and they at last put the work in hand. Even then there were problems: the ‘advertisement’ states that the printing was held up ‘from the great difficulty of obtaining a compleat copy of one of them, which was delivered in a mutilated state by the late Mr Michael Arne’. This mattered little while Michael Arne was alive, ‘as he could very well have supplied, from memory alone, every sort of deficiency’. The situation was saved by the London organist John Groombridge, who ‘not only traced and obtained a compleat copy of the imperfect Concerto, but has actually prepared, superintended, and corrected the entire work’.

Some of Arne’s keyboard concertos were nearly fifty years old when they appeared in 1793. Robin Langley (in The Musical Times, March 1978) has shown that newspaper references to them begin soon after Michael Arne made his concert debut as a singer and keyboard player in 1750 at the age of nine or ten, and that they are consistently associated with him in concert announcements over the next few years; indeed, it is stated in the 1793 edition that ‘those Amateurs and Professors who witnessed the astonishing effect of these Concertos, when they were so successfully performed under the masterly execution and direction of the late Mr Michael Arne, have never failed to bear the handsomest testimony to their merits’.

The oldest of the set are probably Nos 2 and 5; they probably date from soon after Michael Arne’s debut. No 2 has a Vivaldian first movement and ends with a contrapuntal jig similar in style to the well known one in his fourth harpsichord sonata. Two of the three solo movements in between are specifically for organ: the first is for ‘Diapasons’ (and is similar to the solemn diapason movements that often begin English organ voluntaries), while the player is instructed to ‘add the Flute or Principal’ to the second; a note in the edition suggests that they be left out ‘if a Harpsichord be the Instrument’.

No 5 is also solidly Baroque in style. The opening Largo is in the style of a French overture, and leads into an Allegro on a contrapuntal theme similar to one in a violin sonata by Arne’s friend Michael Christian Festing, published in 1736. Much of the keyboard-writing in this movement and in the final Vivace uses the cross-handed technique popularized in England by Domenico Scarlatti’s harpsichord sonatas. In general, this concerto is better suited to the harpsichord than the organ. The harpsichord used on this recording was made by J & A Kirckman in 1778, and is typical of the powerful English instruments used for continuo playing and concertos. It has a single keyboard, with three sets of strings, two at 8' and one at 4'.

The situation is more complicated in the first concerto. A manuscript of the work in a solo harpsichord arrangement evidently preserves it in an early version. In the printed version Arne modernized the first movement by making the first section less like a French overture, removing its characteristic repeat in the process, and added the Andante, a large-scale galant movement similar in style to Haydn’s early harpsichord concertos. The Allegro fugue, now third, originally came second. The last movement, a minuet with variations, is conventional enough until the end, when horns, trumpets and timpani are suddenly and unexpectedly unleashed; their parts were printed in the edition on an extra sheet, and may have been added to the concerto for an occasion when brass players were present for one of Arne’s major choral works.

No 3 seems to have undergone much the same sort of revision. The orchestral passages are largely Baroque in style. Robin Langley points out that the main theme of the last movement is related to an aria in Handel’s Alexander Balus (recorded on Hyperion CDA67241/2), which means that it may date from soon after 1754, when the oratorio was revived. But the keyboard-writing is often much more modern, with Alberti basses and thick left-hand chords that suggest the use of the piano rather than the harpsichord or organ. Pianos became common in London in the 1770s, and it may be that Arne revised the concerto for the new instrument in his last years. Arne certainly envisaged performances on the piano, for his preface to the lost autograph score, quoted in the 1793 edition, was addressed ‘To all Ladies and Gentlemen, performers on the Organ, Harpsichord, or Piano e Forte’. The piano used in this recording is a copy of what seems to be the earliest surviving English grand piano, made by Americus Backers in 1772 and now in Edinburgh. It is similar in size and construction to English harpsichords, is double-strung throughout, and has an experimental version of the action that was used on all subsequent English grand pianos; its sound is startlingly different from the familiar Viennese type, and from the heavier English instruments of the 1790s.

Concertos Nos 4 and 6 are generally the most modern, and were probably not written in any form until late in Arne’s career. The first movement of No 4 has many galant features, and uses the binary form of the sonata – as in the numerous English accompanied sonatas for keyboard and strings of the 1760s and ’70s – rather than the through-composed ritornello pattern of the concerto. No 6 also has an easy-going galant first movement, with cross-handed passages in the solos and sudden contrasts that suggest the use of a piano. Then come two solo movements, a free fantasia in the manner of C P E Bach (who seems to have had a considerable influence on Arne’s later music) and a lively fugue, also German rather than English in style. The last movement, another minuet with variations, ends in a disarmingly throwaway manner: after the theme the orchestra only contributes to the last three bars.

The virtues of Arne’s concertos – graceful melody, a profound command of harmony, brilliant passagework and simple yet highly effective orchestral writing – are self-evident, and do not require a lengthy panegyric. Indeed, the words of the 1793 ‘advertisement’ still ring true today: ‘It is presumed that this great work, the Celebrated Concertos of Dr Arne, at length presented to the Musical World, will not disappoint the very high expectations which have been formed of its value.’