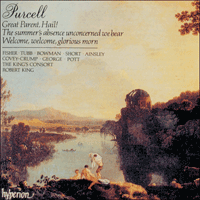 All of the music on this album is also available as part of the specially priced box set Purcell: The Complete Odes & Welcome Songs: ‘A treasure house of shamefully neglected music. Over nine hours of wonderful invention … this major recording achievement must be an irresistible temptation’ (BBC Music Magazine).

‘Great wads of magnificent music that is far too rarely heard … King and his musicians have absolutely hit their rhythm in this series. Everything is excellently judged and sounds right’ (Gramophone)
‘No one need ever record these works again: here is excellent singing, sensitive accompaniment, and care and attention lavished on every detail of phrasing and tempi’ (The Oxford Times)

Purcell and the majority of the British public were genuinely fond of Queen Mary, who with William replaced King James on the throne when he fled to the continent. London musicians breathed a collective sigh of relief at the Glorious Revolution and Purcell composed six of his finest Odes to honour his new Queen’s birthday.

For his 1691 offering to the Queen Purcell was on sparkling form, with recent successes on the stage leading to a more expansive style of composition. Besides the usual strings, Welcome, welcome, glorious morn also required pairs of oboes and trumpets whose presence is felt right from the extrovert start of the Symphony, where the trumpets’ theme is thrown between the pairs of instruments before all join together, first in busy semiquavers, and then in the rich cadential figuration. The imitative section that follows continues in the same vein, with trumpets, oboes and strings answering each other. In the later Odes there is a more integrated style of composition, with sections flowing into each other with more freedom, and the opening demonstrates this as the tenor soloist, oboes and finally the chorus combine together. The duet ‘At thy return the joyful Earth’ leads into a glorious instrumental ritornello before the chorus returns, this time with the addition of two small duets. For the duet ‘Welcome as when three happy Kingdoms strove’ the mood changes to a more intimate style, but Purcell engineers an effective build-up to ‘the loudest song of Fame’. The tenor solo ‘The mighty goddess’ is an extraordinary piece of writing, with the soloist’s florid line contrasting with the insistent chordal string accompaniment. In the next section ‘Full of Wonder and Delight’ Purcell combines three elements, with a trio, a joyful chorus and finally the full instrumental ensemble joining in praise at the infant Queen Mary’s birth. ‘And lo! a sacred Fury’ is a compositional tour de force, with a dramatic recitative-style opening leading into the extended section ‘To lofty strains’, set over a remarkable dotted six-bar ground bass. The soloist’s line is finally taken up by the full vocal ensemble. Another short passage of semi-recitative, ‘My Pray’rs are heard’, this time for soprano, leads into a ground bass (treated freely in view of its brevity) and finally a chorus. The short bass duet ‘He to the Field by Honour call’d shall go’ and elegant tenor solo ‘Whilst undisturb’d his happy Consort reigns’ take us into the final solo and chorus. First a solo tenor and the two trumpets announce the theme, and then in augmented counterpoint the entire ensemble ends the work in triumphant vein.

On 9 January 1694 Trinity College Dublin celebrated the hundredth anniversary of its foundation by Queen Elizabeth with a service at Christ Church Cathedral ‘sung by the principal Gentlemen of the Kingdom’ which was accompanied by orations in Latin and ‘an Ode by Mr Tate’ (the Poet Laureate) ‘who was bred up in this College’. For Great Parent, Hail to Thee! the librettist of Dido and Aeneas produced one of his weaker offerings, but Purcell still produced extraordinarily fine music. The Symphony is suitably celebratory, with the imitative second section neatly crafted, and the opening chorus full of variety and vigour. The alto solo ‘Another Century commencing’ finds Purcell writing gloriously lyrical music for his favourite voice, and the duet that follows (‘After War’s Alarms repeated’) contains effective word-painting in the echoes of the word ‘repeated’. The bass solo ‘Awful Matron’ is an outstanding movement which shows marvellous control of the solo line. The tenor solo and chorus ‘She was the first who did inspire’ also makes charming use of echoes, the duet ‘Succeeding Princes’ is full of lovely harmonies and the chorus ‘But chiefly Recommend to Fame’ opens out gloriously at its end. The soprano solo ‘Thy Royal Patron sung’ (one of the few extended arias for soprano in the Odes) is another triumph of Purcell’s fertile imagination, effectively written with the two recorders bringing added pathos, and the closing chorus is liltingly joyous.

The return of Charles II and the Duke of York from their usual Autumn visit to Newmarket was celebrated on 21 October 1682, but the diarist Luttrell indicated that the event was rather more muted than on previous occasions (probably due to the royal finances being in dire straits). Earlier in the year Purcell had been appointed one of the three organists at the Chapel Royal, an appointment which enabled him and his wife to move into grander quarters in Great St Ann’s Lane, and the commission to set The summer’s absence unconcerned we bear to music was another mark of official favour.

Although the Ode was only the fourth that Purcell had composed, the opening two-section Symphony is, beneath its veneer of joyfulness, one of his most wistful, leading directly into a virtuoso bass solo which again covers a range of over two octaves. A short trio leads into a chorus and the first of the string ritornelli which are such a strong feature of the early Odes. A four-note ground bass forms the basis for the alto solo ‘And when late from your throne’ which leads into its melancholy ritornello via a brief chorus. After a series of shorter movements comes another of Purcell’s gems, the alto solo ‘These had by their ill usage drove’, set over a four-bar modulating ground bass, and leading into the last (and finest) ritornello of the work. A solo tenor opens the final chorus, whose reflective ending proved to be prophetic: though the text wishes the monarch a long life, the hope was to prove vain less than three years later when King Charles’s reign came to a sudden end. Though he had nearly bankrupted the country, he had done much for music and musicians.