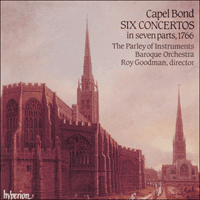 By 1750 England was one of the most musical countries in Europe. London's concert halls, taverns, pleasure gardens, and theatres generated a staggering amount of musical activity — and provided lucrative opportunities for a large community of performers and composers, native and immigrant. Nor was musical life confined to the capital, as it tended to be in centralised monarchies elsewhere in Europe. In the second half of the century most English provincial towns enjoyed an active concert life. The prime mover in most cases was an orchestral society, consisting of a mixture of gentlemen and players — amateurs and hired professionals.

The mainstay of their repertory was the concerto grosso, or 'grand concerto' as it was often called in England. The genre had originally been developed in Italy for professional orchestras, particularly in churches, and it was first popularised in England by London's theatre orchestras. Handel used his concertos as interval music for his operas and oratorios. It was soon realised, however, that concerti grossi were ideal material for amateur orchestral societies, for the difficult concertino parts (usually two violins and cello, or two violins, viola and cello) could be taken by the hired hands, leaving the easy ripieno parts to their employers. At first, the repertory of provincial orchestral societies came from London; favourite items were Corelli's Op 6 Concertos (in Walsh's London reprints), Geminiani's Opp 2 and 3, and Handel's Opp 3 and 6. In the 1750s and '60s, however, a number of provincial composers began to cater for the insatiable demand for concertos. Charles Avison began to write them for his concerts in Newcastle in the late 1730s, and he was followed by, among others, John Alcock in Lichfield, the Rev. Richard Mudge in Birmingham, the Dutch immigrant Pieter Hellendaal in King's Lynn and Cambridge, and by Capel Bond in Coventry.

Capel Bond was born in December 1730, the son of a Gloucester bookseller. Not much is known of his early life beyond the fact that he was apprenticed to the cathedral organist in 1742 at the age of twelve, and later became deputy organist at the cathedral. He moved to Coventry in 1749, becoming organist of St Michael's Church (later Coventry Cathedral); in 1752 he added the post of organist at the church of Holy Trinity. Like many provincial organists at the time, Bond also organised the concerts in his area, beginning, as far as is known, in 1754 with performances of Handel's Messiah and Samson in Wolverhampton and Coventry. In the 1760s Bond extended his activities to the rapidly-expanding town of Birmingham, and seems to have been responsible for founding the festival there in 1767; he certainly conducted a number of the early festival concerts. His activities slackened after about 1770 when he seems to have been ill (he drew up his will on 2 December), though he did not die until 14 February 1790. He was buried at St Bartholomew's Church in the Coventry suburb of Binley, where his tombstone can still be seen, and read in part:

H[ic] J[acet]
CAPEL BOND
40 years organist of the Churches
of St Michael and Holy Trinity in
COVENTRY
He [wa]s an eminent musician
…[and] indulgent husband
…[an]d steady in his friendships
…[exempl]ary in the constant practise
[of his Ch]ristian and social duties
he died February 14th 1790 / aged 59.

All of Capel Bond's surviving music comes from his Six Concertos in Seven Parts of 1766 and the Six Anthems in Score of 1769. Both publications were issued by the author in conjunction with a London bookseller — Mrs Johnson for the Concertos, and Longman, Lukey and Co for the anthems — and were sold in London and Coventry. They seem to have been successful. The anthems went into six editions, while the concertos achieved two editions and attracted subscriptions from most of the notable musical figures in the Midlands, including the Earl of Aylesford, Handel's librettist Charles Jennens (who ordered six sets), the Leicester composer John Valentine, and the Hereford clergyman-composer William Felton, as well as many musical societies up and down the country.

It is not clear when Bond wrote his concertos. No 1 may go back to 1754, for 'Mr. Adcock, the first trumpet of the Vauxhall Gardens, London' is mentioned as a soloist in a newspaper advertisement for Bond's concerts in that year, and Adcock is known to have played a trumpet concerto by Bond in the 1768 Birmingham festival. It was clearly influenced by the trumpet concerto that opens Mudge's Six Concertos of Seven Parts of 1749: both works consist of a French Overture followed by a slow Minuet, though Bond's is much the more accomplished of the two. Bond also adopt ed the overall plan of Mudge's set — four concerti grossi framed by two solo concertos — though Mudge's No 6 is for keyboard rather than bassoon. Bond's bassoon concerto is fairly galant in style, and sounds as if it was composed in the 1760s, shortly before the collection was published. But much of the writing in the first movement is remarkably similar to the famous bassoon solo in 'Softly rise, O southern breeze!' from William Boyce's Solomon of 1742 (recorded on Hyperion CDA66378), and the Concerto as a whole may have been inspired by Boyce's lost Bassoon Concerto, which was certainly in existence by 1745.

Bond's four Concerti Grossi have been almost entirely neglected in modern times, though by and large they are finer works than his two solo concertos. They are laid out in the pattern popularised hy Geminiani's Concertos in which a slow introduction leads to a fugue, and then to one or more movements, mostly based on dance rhythms. Concertos 4 and 5 open with a passage in dotted rhythms, creating the impression of a French Overture, though only the first movement of No 5 has the repeat usually associated wlth the form. The opening movements of Concertos 1 and 2 are more unusual and individual. In both cases chordal passages in a severe, antique style give way several times to more modern, ornamented material — the Baroque, as it were, succumbing to the Galant. Here, as elsewhere, Bond shows a remarkable a bility to create idiomatic and unusual string textures, often underpinned by striking progressions. Bond's fugues are less idiomatic, and probably derive from organ improvisations, as many of Handel's fugues seem to do, though they are worked out with vigour and imagination. Two of them seem to have been inspired directly by Handel's fugues. The one in Concerto 5 uses an idea similar to Handel's keyboard fugue No 6 in C minor (also found in the Trio Sonata Op 5/5), while the fugue in Concerto 3 uses a favourite Handelian idea, best-known from the Chandos anthem 'As pants the hart' and the chorus 'These pleasures, Melancholy, give' from L'Allegro ed il Penseroso. Bond is known to have directed L'Allegro in the 1768 Birmingham festival, and his concerto was perhaps written as interval music for earlier performances of the oratorio.

The models for the dance movements are more varied. The last movement, with its sophisticated textures and tremolando writing, was probably inspired by the fifth movement of Handel's Op 6/5, while the fugal jig that ends Concerto 2 recalls similar movements in Op 6/12 and John Stanley's Op 2/4 (recorded on Hyperion CDA66338). The last movement of Concerto 5, a fast and furious Italianate Minuet, is a good example of the sort of writing that was popularised in England by Domenico Scarlatti's harpsichord sonatas; the idiom came into the concerto grosso by way of Handel's Op 6, some of which use Scarlattian ideas, and Charles Avison's concerto arrangements of Scarlatti sonatas, published in 1744. Capel Bond's concertos were evidently popular in their time, and remained long in the repertory — in London as well as in the Midlands. Two of them, Nos 2 and 5, continued to be played in the Concerts of Ancient Music until 1812. They are arguably the best set written by an English eighteenth-century provincial composer, and are eloquent testimony to the vigour of musical life outside London.