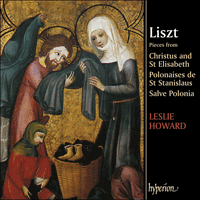 ‘Another pithy release in what is fast looming as one of the most imposing recording landmarks of the century’ (Fanfare, USA)
‘The present Liszt disc is among the finest of the series to date’ (CDReview)

The recent revival of interest in Liszt’s oratorios has been a welcome change from the well-nigh total neglect into which they had fallen. True, oratorio by and large is not the great staple of the repertoire it once was, and, with the exception of one or two favourites, very few works of this genre enjoy any real popularity today. It is probably a question of expense which keeps one-time regulars like Mendelssohn’s St Paul, Dvorák’s St Ludmilla or Gounod’s Mors et Vita out of concert programmes, and in contrast with, say, the mighty library of oratorio vocal scores which Novello published a century ago, even the greatest works are rarities, and the recording industry has scarcely been able to fill the gaps.

Liszt’s Masses and oratorios were very important to him and were all composed with particular care and subject to intense self-criticism and reworking. The early success of the great orchestral Mass for the Consecration of the Basilika at Esztergom (‘Graner-Messe’) may have encouraged Liszt to complete Die Legende von der heiligen Elisabeth, his first oratorio. The time to complete the work was at hand too, since Liszt had resigned his post at Weimar. Although Liszt refused to attend a production in 1883, the work was quite often given as an opera in the nineteenth century—it is certainly as close as Liszt ever came to completing an opera in his maturity: the work is organized rather like a set-number opera with solos, choruses and orchestral pieces, but bound together by a series of themes and their transformations. These themes, which Liszt quotes in the preface to the full score, act as leitmotifs in the drama. The first, which dominates the orchestral introduction and recurs in some form whenever Saint Elizabeth herself is involved, is a plainchant, ‘Quasi stella matutina’, copied for Liszt by Mihály Mosonyi from an old Hungarian ecclesiastical hymnal. The second, ‘On the Life of St Elizabeth’, which is heard at the beginning of the ‘Interludium’, is from the seventeenth-century collection Lyra coelestis of György Naray. The third, which is a Hungarian popular song given to Liszt by the violinist Reményi, appears in the central martial section of the ‘Interludium’. The Saxon hymn ‘Schönster Herr Jesu’ is used as the lyrical melody in the ‘Crusaders’ March’, while the fifth, a plainchant-derived group of three ascending notes (G, A, C) forms the basis of the main theme of that march, and is, in fact, the so-called ‘Cross-motif’ which recurs throughout Liszt’s religious music, from the Esztergom Mass to the Via Crucis. The vocal score (which also used to be printed by Novello with a Liszt-approved English text) was prepared by Liszt himself.

As might be expected, the piano writing is beautifully organized, and the textures never sound like a crude representation of an orchestral score—a virtue familiar from Liszt’s painstaking transcriptions of the Beethoven symphonies. And like those transcriptions, Liszt does not hesitate to substitute music which recreates the general effect sooner than the precise notes of the original—compare the Liszt piano part in the St Elisabeth vocal score with the no doubt more pedantically correct but absolutely unusable accompaniment provided in a recent Hungarian edition of the work. The first and third orchestral movements of the oratorio first appeared as piano pieces in their own right within the vocal score, and the second combines the introduction to the third number of the oratorio with the March that concludes the first part. The pieces were issued separately, but for some reason they were not accorded a listing in the Searle catalogue of Liszt’s works. Unfortunately, no version for piano solo of the ‘Miracle of the Roses’ section from the second number of the oratorio has come down to us, even though Liszt played it (improvised?) on more than one occasion. Like much of Liszt’s large-scale religious works, the musical language of these pieces is gentle and restrained, the harmonies largely unchromatic, the lines long and the architecture noble.

The two enormous orchestral movements from the oratorio Christus also appeared first in Liszt’s vocal score, but in the reissue he made some corrections and alternative suggestions which are incorporated in the New Liszt Edition and in this recording. Christus is a very different conception from Saint Elisabeth in its musico-dramatic structure. It is divided into three almost distinct sections—Christmas Oratorio, After Epiphany and Passion and Resurrection. There are movements based upon plainchants, others entirely freely composed. Some movements are for voices and organ only, others use the full orchestra, and the last two movements of the first part—for orchestra alone—are like orchestral pictures of the early life of Jesus. Most commentators agree that Christus as a whole contains, along with the Piano Sonata and the Faust-Symphonie, the best of Liszt’s music. The two orchestral sections may not represent the highest point of the whole oratorio—surely the Passion music does that—but they are nonetheless particularly moving evocations of the shepherds and their pipes, and of the Wise Men following the star. Both movements have an almost Schubertian suspension of time to them. The shepherds’ pipes begin carolling in a regular 6/8 before the shepherds themselves—in something reminiscent of a chorale undulating between 3/4 and 2/4—join in. A central hymn-like theme completes the material and all three themes weave in an out, leading to a jubilant outburst of the pastoral opening theme before the recapitulation. The march of the kings begins in an uncomplicated, almost playful mood, but at the moment when they see the star and follow it the mood is transformed, and one of Liszt’s most inspired melodies raises the music to quite another level. An adagio section symbolizes the offerings of gold, frankincense and myrrh, and the kings’ joy finally becomes uncontainable and the tempo increases to a splendid display of justifiable rhetoric. It is sad to have to report that most orchestral performances of this movement on record miss this mighty transformation of mood and pace altogether.

Saint Elisabeth of Hungary was certainly an obvious choice for Liszt. So too was the life of Jesus for a man who, whatever his personal and public shortcomings, has to be credited with the sincerest religious devotion. The life of the Polish saint Stanislaus seems to have been taken up partly to please the Polish Princess zu Sayn-Wittgenstein and, apart from the three pieces recorded here and a setting of Psalm 129, ‘De profundis’, never developed into the finished oratorio, even though Liszt worked on it intermittently for a dozen years (between 1873 and 1885). From the inclusion of the earlier Salve Polonia as an interlude, and from the use of some of the same material in the second of the Polonaises, it seems that Liszt was going to use national melodies to bind the work together in the same way that he employed them in St Elisabeth, but the setting of ‘De profundis’ is a stark and serious affair akin to the style of the late piano pieces, and it is hard to see how the elements might have fused together. In any event, Liszt published Salve Polonia in versions for orchestra, piano and piano duet in 1884, and the Psalm appeared in one version in 1883, so he may have known for a long time that he would not finish the oratorio. The rest remained in his desk, but the two Polonaises were complete in versions for solo piano—it cannot be said that they are transcriptions in the sense that there is no orchestral version of them extant—so their only place is amongst the bone fide works for piano, remembering the while that Liszt never revised them for publication.

The first Polonaise is a dark piece, harking back in some ways to such forerunners as Chopin’s C minor Polonaise and Liszt’s Polonaise mélancolique, and by the end even the metre, let alone the rhythm, of the dance is quite removed in a mystical rocking of simple chords. By contrast, the second Polonaise is thoroughly festive, breaking into a Polish revolutionary song ‘Dabrowski-Mazurek’ at the coda. This song also generates the second part of Salve Polonia, while the first section of that work, full of portents of Liszt’s late music, varies another famous Polish patriotic-religious song ‘O Lord who has guarded Poland’ around a tranquil and harmonically daring development of it—superscribed with a quotation from Psalm 83 (84 in the Authorized Version): ‘Yea, the sparrow hath found an house, and the swallow a nest for herself, where she may lay her young, even thine altars, O Lord of hosts.’