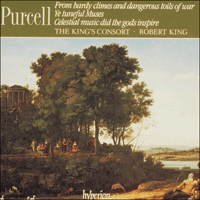 All of the music on this album is also available as part of the specially priced box set Purcell: The Complete Odes & Welcome Songs: ‘A treasure house of shamefully neglected music. Over nine hours of wonderful invention … this major recording achievement must be an irresistible temptation’ (BBC Music Magazine).

‘Purcell's melodic and harmonic inventiveness has rarely been treated to such marvellous performances. If you have missed the earlier releases … I suggest that you begin collecting with this disc and obtain the remainder without fail’ (CDReview)

Ye tuneful Muses was written in 1686, most probably to celebrate the return of the Court from Windsor to Whitehall on 1 October. As the birthday of King James II fell on 14 October some scholars have suggested it is possible that the celebrations were combined, for the diarist Luttrell recorded that the birthday was ‘observed with great solemnity … the day concluded with ringing of bells, bonefires and a ball at Court’, but there is little in the text to suggest this was so. That anonymous author did however provide Purcell with a good libretto, full of variety and vivid material for compositional inspiration, especially in its references to music and musical instruments and, as ever, Purcell did not fail.

The fine opening Symphony is in the conventional two-section French style (which had itself originated in Italy), with the opening dotted section followed by a faster imitative triple-time movement. Two basses follow this with a rich duet, full of word-painting, linked to the first chorus by a short string ritornello. The section ‘Be lively then and gay’ is ingeniously based on the popular song ‘Hey boys, up go we’, and Purcell used its tune (to be found in The Dancing Master, 16th edition, 1686) first as the bass to the tenor solo, then as a counterpoint in the violins to the chorus, and then again as the bass to the dancing string ritornello which concludes the section. It is not known who was the bass singer for ‘In his just praise’ but he must have had a remarkable range of over two octaves which Purcell exploited to the full. The composer’s good humour continues, for in the next section the upper strings furiously play on all four of their open strings in response to the chorus’s exhortation ‘Tune all your strings’. The musical allegories continue in ‘From the rattling of drums and the trumpet’s loud sounds’ before we enter into a more gentle section ‘To music’s softer but yet kind and pleasing melody’ which is accompanied by two recorders. This leads into the jewel of the Ode ‘With him he brings’, sung at the first performance by the famous countertenor (and fine composer) William Turner. Over a wonderful four-bar ground bass the Queen’s beauty is praised, with especially delightful writing for ‘There beauty its whole artillery tries’, before the ground bass modulates up a fifth, and Purcell provides (as he does in so many of the Odes) a delicious string ritornello. The soprano duet ‘Happy in a mutual love’ which follows is delightful too, and the work ends with a lilting solo and elegantly harmonized chorus ‘Whilst in music and verse’.

In 1689 Purcell was commissioned to write works by two London schools. The more famous of these commissions resulted in Dido and Aeneas, first performed at Josias Priest’s School for Young Ladies in Chelsea, but at around the same time (perhaps keeping up with his competitors) the schoolteacher Mr Maidwell commissioned the music to the Ode Celestial music did the gods inspire, which was performed at his school on 5 August. The librettist is unknown, simply credited in the score with ‘the words by one of his scholars’, but certainly appears to have had a firm grounding in Greek and Roman mythology—and produced verse that was better than some written by more distinguished names of the time.

Purcell took the Symphony for the Ode directly from his 1685 coronation anthem My heart is inditing: such re-use of material was comparatively rare with Purcell and suggests that there may have been some haste in the composition. The solo bass at ‘Celestial music’ is accompanied by imitative strings who lead into a chorus which blossoms wonderfully at ‘Whom sacred music calls her Deity’. ‘Her charming strains’ is evocatively scored over a four-bar ground bass for the other-worldly combination of countertenor and two recorders and the instruments are provided with an elegant playout. ‘Thus Virgil’s Genius’ is also set on a ground and is given to a soprano soloist, followed by the duet ‘Whilst music did improve Amphion’s song’ and a string ritornello, both based on the rhythmic motif of a Scotch snap. ‘When Orpheus sang’ is a minature masterpiece in which, once again, the theme of music inspires Purcell to produce a movement of startling originality: the countertenor weaves a florid line over a hypnotic chordal accompaniment illustrating Orpheus and his lyre subduing nature and even cruel Pluto. Closing the work is a trio (with suitably rich harmony for the word ‘ravish’d’) which is then taken up by the chorus and enlarged with virtuoso breaks for the first violin.

On 28 July 1683 the Bishop of London presided at St James’ in the marriage of Prince George of Denmark to King Charles’s niece, ‘Lady Ann’ (later Queen Anne). On 19 July Luttrell had recorded that ‘in the afternoon, Prince George, brother to the King of Denmark, arrived at Whitehall, and was kindly received by their majesties and their royal highnesses, being come to make his address to the Lady Ann, daughter to his royal highness’. We do not know for certain if Purcell’s Ode From hardy Climes and dangerous Toils of War was performed to the newly wed couple at their marriage celebrations, but the work is one of his finest early Odes, full of wonderful string ritornelli and fine vocal writing.

The Symphony is one of the composer’s best, simultaneously joyful yet wistful in the way that only Purcell’s early string writing can be, wonderfully inventive and delightfully unpredictable. Once again a solo bass introduces the voices with an extended solo covering a wide vocal range before the chorus enter. This chorus leads into the first of several splendid string ritornelli. Next a solo tenor has some glorious writing for ‘As Fame, great Sir’, especially at ‘The wonders you have since possessed’, and this is followed by an equally fine duet for sopranos. The solo bass introduces the chorus ‘Wake then, my Muse’ which is concluded by another ravishing string ritornello. However the best is yet to come. Here it is the tenor who is presented with one of Purcell’s finest and most inspired ground bass solos in ‘The Sparrow and the gentle Dove’: the singer’s lyrical melody is capped by a string ritornello of quite melting beauty. A short trio and another wistful ritornello lead into the final chorus ‘Hence without Scheme’ where the soprano soloist alternates with the full ensemble.