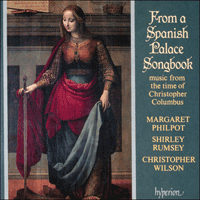 From a Spanish Palace Songbook

Music from the time of Christopher Columbus

A treasure as rich as any discovered by Columbus in the New World is the so-called Cancionero de Palacio (‘Palace Songbook’), still preserved after almost five hundred years in the royal palace in Madrid. This elegant, disarmingly petite volume originally contained well over five hundred songs, of which almost 460 survive. Compiled over a period possibly as long as forty years, the Songbook is clearly intended to have been a repository of polyphonic song, most probably of the repertory of the royal court of Ferdinand and Isabella. The link with the royal court has never, in fact, been proven, and rests largely on the evidence of the high proportion of songs attributed to composers who served at least for some of their careers in the royal chapels. A substantial number of the songs, however, bear no ascription at all, and it is possible that this emphasis is misleading. The large body of songs – about sixty – attributed to one composer, Juan del Encina, throws into relief a possible involvement on his part in the compilation of the collection, at least in its early stages. Encina, nine of whose songs are featured on this recording, never actually served at court, at least in any official capacity: it would appear that he was not, for example, a salaried member of the large chapel choirs funded by the Aragonese and Castilian treasuries. He did serve, during the 1490s, at the court of the Duke of Alba, the king’s cousin, in Alba de Tormes just outside Salamanca, and it would seem that much of his poetry, most of his plays and many of his songs would have been written and composed during this period: his collection of lyric verse was published in Salamanca in 1496 and dedicated to the duke.

However, Encina clearly had royal connections, both during this, his most productive period, and later, towards the end of the first decade of the sixteenth century, when he represented the chapter of Málaga Cathedral at court. By that time, however, he was basically resident in Rome and it is more likely, if he was involved in any direct way with the Palace Songbook, that this occurred during the 1490s. Certainly, during this period he dedicated a number of prose works to members of the royal family, and notably to prince Juan, heir to the throne whose untimely death in 1497 inspired the moving lament Triste España sin ventura. It may be that Encina, having successfully curried favour with the future king, saw his own hopes dashed by Juan’s demise. The role of the prince himself in the cultivation of polyphonic song at court should not be underestimated: he is said to have spent his afternoons singing three-part songs with his chapelmaster, Juan de Anchieta, and a handful of the best of the choirboys in the royal chapel. This princely passion for polyphonic song might well account for the enormous vogue for it that swept not only through the royal circles but also through the courts of the nobility in the first decades of the sixteenth century. Even lesser nobles vied for the services of the best singers, specifically for the performance of songs. The evidence that can be drawn from their correspondence and from other literary sources, fictional and non-fictional, suggests that there were three basic ways in which these songs were performed: one was a cappella, usually with one voice to a part or with a number of boy singers on the top line, as in the case of prince Juan’s siesta-time musical pursuits; the second, and that explored most fully here, involved the art of solo song accompanied by vihuela, lute or even harp; the third saw a combination of two or three ‘soft’ instruments in a purely instrumental rendition. While the songs in the Palace Songbook are notated in the manner customarily used for vocal polyphony, there can be little doubt that they were often performed in all these ways in the intimacy of the chambers of kings, dukes and even lesser mortals such as university students.

The repertory of the Palace Songbook, covering as it does such a long period in time, reflects several changes in style; it also contains a huge variety of themes, forms and musical idioms that range from relatively sophisticated contrapuntalism to the simplest folksong arrangement. The dominant style, however, and that which seems to have been most closely associated with the vogue for polyphonic song, is that apparently first cultivated by Encina. This style, lyrical and largely homophonic (thus, much in the manner of melody and accompaniment) ousted the older tradition of song composition that was generally more contrapuntal – at least in the sense that the vocal lines moved independently – and more intricate and ornate in terms of word-setting. Encina’s songs, whether in the simple refrain form of the villancico (Más vale trocar or Hermitaño quiero ser are good examples) or the longer and even more straightforward repetition scheme of the ballad or romance (Triste España sin ventura and Una sañosa porfia) are essentially syllabic in their setting of the words, with each line of verse clearly delineated by a strong cadence at which point all movement stops. Typically, on the penultimate syllable, a short melisma coincides with a rhythmic drive to the cadence.

In many songs, especially those in triple metre even this rhythmic sophistication is absent, the texture being almost exclusively homophonic in the manner of the Italian frottola. Indeed, a number of frottole are also preserved in the Palace Songbook, including the anonymous L’amor, dona, ch’io te porto and Encina’s own Fata la parte. This melodious, chordal song style cultivated by Encina was quickly emulated by court composers, although within the basic idiom there was room for some personal idiosyncracies: some composers, such as the slightly later court composer Gabriel in his Aquella mora garrida for example, favoured brief points of imitation at the start of each section.

A striking aspect of the repertory of the Palace Songbook is the extent to which themes and melodies of songs of popular origin infiltrate the collection. It is not always possible to disentangle the original traditional melody or complete refrain from those composed in emulation of a more popular idiom, though the simple but very appealing ditty Tres morillas m’enamoran en Jaén may be a case in point. The anonymous version sung here, with all the simplicity of a folksong, is followed in the Palace Songbook by another that draws on the same melody but reworks it into a fully-fledged villancico in the Encinian style that is just that touch more sophisticated. Al alva venid, buen amigo is a further example of a popular melody set in chordal fashion, while Anchieta’s Con amores, mi madre draws on another aspect of indigenous folk music, a rhythm of five beats in the bar, highly unusual in courtly music of this period.

There is little doubt that such popular elements that were absorbed into the court song repertory contributed to the evolution of a distinctively ‘Spanish’ song style, one that is of essence quite distinctive from the Italian frottola which in terms of texture and general feel it resembles. Similarly, the themes of the villancicos in the Palace Songbook are both closely related and yet often quite strikingly original to those of other song traditions. One feature, possibly inherited from Arabic song, is the idea of the young girl confiding in her mother about her emotions or amatory experience, as in Con amores, mi madre or So ell enzina. Another is the pastoral vein adopted in many of Encina’s songs. This can be humorous as in Antonilla es desposada, or more refined as in Badajoz’s ¿Quién te hiso, Juan pastor?. This last is particularly interesting in that it shows the influence of Encina’s lyric verse on a court composer of a slightly later generation in which the lively pastoral dialogue is no longer entirely bucolic but combines the more formalised approach of verse in courtly love vein. The themes and concerns of courtly love are also found among Encina’s songs, often combined with a more popular musical idiom, as in Más vale trocar where the conceit of ‘dying’ for love is played out once more amid those emotional antitheses of pleasure/pain, passion/torment, sweet oblivion/harsh cares and so on. Vuestros amores he, señora draws on the same ideas in a reflection on the beloved’s beauty which makes suffering in her service worthwhile. Running away from such emotional confusion is the theme of Hermitaño quiero ser where the isolation and tranquility of the hermit’s life seem to provide the only solution. O castillo de Montanges is unusual in its combination of the mother-figure with the courtly love context.

A number of songs in the Palace Songbook set texts in curious linguistic mixtures that are more or less intelligible: Ollademe, gentil dona and Pase el agoa both introduce Italian and French words into Castilian, the first drawing only on a multilingual refrain, the second, in frottola style, being linguistically composite throughout. Finally, there are the romances, the ballad enjoying a new lease of life with the renewed undertaking of the Reconquest of Granada in the 1480s. Encina’s Una sañosa porfia is typical of the ballads of royal propaganda circulating at court, many of which were undoubtedly commissioned by Ferdinand and Isabella. It relates, from the point of view of the beseiged Moorish king Boabdil, their armed forces, their courage, their success and their crusading mission to convert mosques into churches, and it ends with a description of the banner bearing the red cross that accorded the Reconquest the status of a crusade. The ballad form, in which four musical phrases were repeated for the entire text, found favour for other subjects, particularly those of a historical kind, as in the case of Triste España sin ventura, the lament for prince Juan whose death robbed the Spanish court of an important patron of music and whose love for song may even have inspired the Palace Songbook.

The Palace Songbook contains only one piece that was clearly intended to be instrumental: the Alta attributed to the court composer Francisco de La Torre. This elaborate dance is based on the chord sequence identified as ‘La Spagna’ in other instrumental collections such as those of the lutenist Francesco da Milano. There are many other pieces marked ‘alla spagnola’ in non-Spanish anthologies of lute pieces, though the exact meaning of such a designation is not always clear. The Calatas ala spagnola in Joan Ambrosio Dalza’s Intabolatura de lauto of 1508 form a section of the collection and possibly represent a medley on tunes of Spanish origin or in Spanish vein, though there is little else by way of a clue as to their elusive titles. The style of the pieces varies, one having a ricercar-like coda, here complementing Capirola’s Recercar alla spagnola. The origin of the heading ‘Caldibi castigliano’ is equally puzzling and may hint at a piece, or a manner of playing, of Arabic provenance.