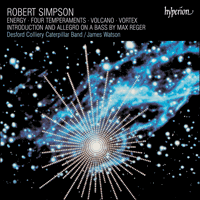 ‘Marvellously played … superlative … performances of a calibre I do not recall ever hearing before. Strongly to be recommended to serious listeners of any persuasion’ (Gramophone)
‘Essential listening for all enthusiasts of this marvellous composer’ (CDReview)

There is arguably no composer with a stronger affinity to the world of the brass band than Robert Simpson. As a boy of seven, Simpson, like his great mentor Carl Nielsen, took up the cornet, his first crucial experience in music-making, playing in brass bands as a child. His first attempt at composition was a set of variations for cornet on Annie Laurie. He did not know how to write a piano part so he got a friend who could play by ear to play Annie Laurie over and over again while he put in all the twiddly bits on the cornet. So brass band music is in Robert Simpson’s blood. His complete output is on this disc.

Energy
This is Simpson’s first essay for the medium and is one of the most instantly attractive and freshly original works in his oeuvre. It was commissioned for the 1971 Brass Band World Championship at the Royal Albert Hall, London, in October of that year. Any listener familiar with Simpson’s work will know that energy is an essential part of his music. This work is literally a single composed accelerando, similar in design to the second movement of the Symphony No 3 (1962) and the concluding fugue of the vast String Quartet No 9 (1982).

Energy is made up of five short sections, gradually increasing in activity from a solemn Adagio maestoso introduction to a fiercely exuberant finale, Presto vivo. Each section is a little faster than the previous one, thereby creating the impression of a massive acceleration in momentum and excitement, despite the fact that the basic pulse that opens the work remains unaltered throughout. Energy is dedicated to Eric Ball, himself a renowned conductor and composer of brass band music.

The Four Temperaments
Just as Nielsen provided witty, illuminating notes for his Symphony No 2, which shares the same title, so Robert Simpson prefaced the score of this work with the following words:

The sanguine temperament crashes through life with irrepressible enthusiasm. Obstacles stop him only for a moment, and he goes roaring on as if nothing happened.

The phlegmatic temperament is placid, not readily upset. It is not stupid or bovine (as is sometimes supposed) but it cannot be easily ruffled. Here it is seen to be unperturbed by a considerable disturbance from the timpani and snare drum.

The melancholic nature is not merely lugubrious. It is deep-feeling, serious and dignified. There is something grand and courageous in its gloom and strength and in its willingness to face grim facts.

The choleric man is quick to anger, but is not simply vituperative – he has in him good and generous qualities, but even when he is calm something is smouldering inside him, ready to burst into flame.

Each temperament is dedicated to a friend of the composer, respectively Martin Anderson, Dick Edwards, Robert Barnes, and John and Sylvia Brooks. The work is an organic whole, the closest Simpson approached to a fully fledged four-movement symphony for brass band, with two explosive outer movements surrounding two calmer ones. Certainly its bold design and grand conception suggest a work of truly symphonic dimensions. The Four Temperaments was completed in 1983.

Vortex
This is Simpson’s last work for brass band. It is dedicated to the composer John Pickard as atonement for having stolen (inadvertently) a title that had already been used by him. It is the shortest of the brass band pieces, but it retains something of the muscular symphonic fibre that pervaded The Four Temperaments. The music is truly vortex-like and is finally sucked down into one note, referred to by the composer as ‘not really a tonic note, more a plughole note’!

Vortex is in Robert Simpson’s highly characteristic fast triple-time pulse, which is maintained for the entire duration of the piece. Beginning mysteriously with a sinister muttering motive low on tubas and trombones, the music grows with considerable strength as powerful stretches of vigorous music contrast with quieter moments. These latter moments seem to reveal a new transparency of sound in the composer’s band scoring. The work concludes with a formidable blaze of sound recalling the final pages of Simpson’s Symphony No 10 (1988).

Volcano
This is Simpson’s second work for brass band. Like Energy is owes its existence to a commission from the National Brass Band Championships of Britain, and like Vortex it is dedicated to a fellow composer, this time Edmund Rubbra.

Robert Simpson said that Volcano can be heard as an evocation of a volcanic eruption, as the expression of a volcanic temperament (thereby prefiguring The Four Temperaments written just four years later), or purely as a piece of music. Unlike Vortex, the tempo constantly fluctuates in a manner that mey recall the later symphonies of Havergal Brian, and an overall pattern emerges, contrasting slow and fast tempi. The uneasy tension that hovers around the opening Calmissimo might convey to the listener the gentle smouldering of a volcano, soon to be shattered by the ferocity of the first spasmodic eruptions. In between the violent Allegros are placed two Meno mosso sections. Here serene, softly sustained melodies on solo cornets and tenor horn drift past ‘as from a clear sky’, against rich, long-held chords. When this section occurs a third and final time, Lento just as a fleeting reminiscence, the music quietly disappears into space; the volcano is calm once more.

Introduction and allegro on a bass by Max Reger
Even if Reger was not one of the deepest formative influences on Robert Simpson’s music, he was a composer who continually fascinated Simpson thoughout his creative life. The bass referred to in the title occurs towards the end (bar 103) of the fugue of Reger’s great organ Fantasia and Fugue in D minor, Op 135b, completed in 1916, the year of its composer’s death.

Simpson has altered Reger’s 12/8 metre to a 3/4 pulse, and treated the original (which first appeared in a vast ritenuto) as an allegro. Like Brahms in the great passacaglia from his Symphony No 4, Simpson has changed one note only, so as to make the bass combinable with a series of rising fourths, a feature strikingly evident in his Symphony No 9, the work that immediately preceded this Introduction and Allegro.

The extended slow introduction, Adagio — Pesante, is mysterious, awesome, based on fragments from Reger’s bass which emerge in many different forms and different melodic shapes throughout. After a big climax is reached, a stabbing repeated-note figure provides a link into the main Allegro vivace where the Reger bass is presented complete for the first time. Other themes are also introduced which show the rising fourth as a prominent interval. The final section is a thrilling crescendo of almost Brucknerian intensity, which uses Reger’s own treatment of his bass at its peak, providing a thunderous culmination to one of the most impressive and challenging works in the entire brass band repertoire.