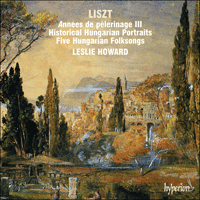 ‘More riches from the late piano repertoire of Franz Liszt, performed with skill and authority. Another excellent recording’ (CDReview)

Liszt's late piano works are of a character not met elsewhere in the great music literature of the nineteenth century. The thinning out of the style, almost to the point of deliberate barrenness, and the simultaneous impression of avant-garde pioneering and the solitary reflection that comes with age is unique to Liszt. The uncompromising nature of much of this music led to its instant neglect, and, in many cases, its lack of publication until well into the twentieth century.

Other volumes in this series explore the late waltzes, three of the larger sets of pieces (Via Crucis, Christmas Tree and the Chorales) and the single character pieces of the last period of Liszt’s life, and still to come are some of the late transcriptions, the last Rhapsodies and the other late dances and marches. The present programme comprises the remaining sets of pieces (not cycles, however many times they may have been so described) and two other rarities from the 1880s.

Much criticism was raised against Liszt because, in many of his earlier works of an overtly Hungarian nature, he had not differentiated between gypsy café music or professionally composed music and Hungarian folksong. (It always strikes me as a colossal injustice that other composers of the time—such as Brahms in his Hungarian Dances—were never castigated in the slightest for afflicting serious butchery on folk material, and yet Liszt, who certainly treated his source material with love and wit, whatever its origins might have been, stood condemned.) Almost as a conscious act of atonement, it seems, Liszt arranged five ‘real’ Hungarian folksongs, even indicating repeats to correspond with the number of verses in the original poem, just as he did in his chorale arrangements, and, as there, these repeats are not germane to the musical structure and are not generally performed. He even included the texts, in the Hungarian which he could not himself read with any fluency, at the head of each of these charming miniatures.

Apart from a theme from the Hungarian national hymn, Szózat es Hymnus, there are no folk materials at all in the Historical Hungarian Portraits. Those interested in the complete account of the background to these works will find much information in the notes to volume I/10 of the excellent Neue Liszt-Ausgabe. For the present purpose it is sufficient to say that Liszt set out in some way to write musical epitaphs and characterizations of seven famous nineteenth-century Hungarian statesmen and artists. Numbers 1, 2, 3 and 5 were all composed in 1885, at which time the whole series took shape: No 4 was adapted by shortening the march from Trauervorspiel und Trauermarsch, also composed in 1885 and, incidentally, using a four-note ground bass derived from a Mosonyi piano piece Lament on the Death of István Széchenyi; No 6 is an extended version of a piece composed in 1877, Dem Andenken Petöfis, which itself derives from a recitation for voice and piano, The Dead Poet’s Love of 1874, and No 7 is a slightly extended version of the c1870 piece, Mosonyis Grabgeleit. Liszt apparently intended to orchestrate the series, but that task was undertaken by his pupil Arthur Friedheim in 1886 (Nos 1, 4, 5 and 2 only), and the whole cycle remained unpublished until 1956. No 1 commemorates a distinguished political reformist and writer in a Hungarian quick march characterized by much unison writing, and introducing a motif of a falling fifth which recurs in several of the pieces. No 2, a slower march for another politician, has a lyrical central section, while No 3 quotes the theme of the Szózat to which the poet Vörösmarty contributed with Egressy. The politician and writer Teleki’s persecution and suicide are fittingly represented in a grim funeral march. No 5 is another quick march for a politician and writer. The last two pieces, because of their earlier origin perhaps, are much softer and more comforting in their nature. No 6 is an elegiac march in memory of a great poet, while the march element is finally suppressed by frequent excursions into 5/4 in the last piece, full of tolling bells for the distinguished Hungarian composer whose career Liszt had encouraged, not least in making a transcription from Mosonyi’s opera Szép Ilonka.

Puszta Wehmuth (‘Longing for the Steppes’) is apparently based on a work by the Countess Ludmilla Gizycka, née Zamoyska, although no mention is made of this in the original publication. Zamoyska’s work, in turn, is based on a poem by Lenau. The piece is a sort of miniature rhapsody with rather simple texture with the characteristic slow (Lassan) and fast (Friska) sections, and with a reprise of the opening flourishes at the end.

The left hand version of Hungary’s God—a work whose root form is for voice, chorus and piano, and which also exists for piano, two hands—is Liszt’s only contribution to the literature for the left hand alone. It was arranged for his friend Count Géza Zichy—a formidable pianist, despite having lost his right arm, if his own left-handed version of Schubert’s Erl-King is anything to go by. (Liszt also arranged one of Zichy’s original works for left hand, Valse d’Adèle, for piano, two hands.)

The genesis of the Troisième Année de pèlerinage is very different from that of its two predecessors. The first (Suisse), and the second (Italie) were brought into their published shape in the mid-1850s during Liszt’s time in Weimar, although most of the pieces actually originated during the period of his young wanderings in the company of Marie d’Agoult in the 1830s. They are both volumes of intensely passionate, essentially young man’s music, whatever refinements accrued to them. The third volume, sometimes very mistakenly published with the subtitle of ‘Italie’, is the product of a fundamentally solitary person, written during the later years of his life, when he made an almost annual triangular trip through Rome, Weimar and Budapest. Five of the pieces date from 1877, but Liszt added two earlier works: numbers 5 and 6, from 1872 and 1867. Angelus! also exists in versions for harmonium, for string quartet and for string orchestra and is an innocent diatonic melody in a lilting 6/8. It forms the beginning of the arch which ends in the experience of the seventh piece, Sursum corda—the exhortation to ‘lift up your hearts’ at the Eucharist—where a benign theme endures chromatic rigours and even a burst of whole-tone harmony before the strength of faith brings the cycle to a firm and positive conclusion. Midway lies the mystical comfort of the Fountains of the Villa d’Este—an impressionistic masterpiece, years ahead of its time and much imitated, consciously or no, by Debussy and Ravel. Although this work is pictorial, its very key of F sharp major allies it to a number of Liszt’s most intimate religious reflections, particularly Bénédiction de Dieu dans la solitude, and its message is spelt out at bar 144 (at the modulation to D major) with a quotation (in Latin) from the Gospel of St John: ‘The water that I shall give him shall be in him a well of water springing up into everlasting life’ (Authorised Version, John 4: 14).

The four remaining pieces are all elegiac: the two Cypresses are both subtitled ‘Threnody’ although no specific object of lamentation is divulged. And it is clear that Liszt wrote the second under the misapprehehsion that Michelangelo had planted the first cypress at Santa Maria degli Angeli in Rome, and that he changed the title when he discovered his error. Whilst the first of the Cypresses is nominally in G minor/major, the effect of suspended tonality is present from the beginning. There is some attempt here at depicting (in 3/4) the rocking of the trees in the wind, a feature altogether absent in the second threnody which makes an oblique nod towards the traditional funeral march without ever succumbing. The other two elegies refer to Liszt’s personal acquaintances: in a broad sense in Sunt lacrymae rerum and specifically in the Marche funèbre. The first of these, originally entitled ‘Thrénodie hongroise’ refers to the rout of the Hungarian War of Independence (1848–1849) and the subsequent execution of some of Liszt’s patriotically distinguished friends (cf the earlier Funérailles) and the final title comes from words spoken by Aeneas in Virgil’s Aeneid (quoted here in the translation by W F Jackson Knight): ‘… there is pity for a world’s distress, and a sympathy for short-lived humanity.’ The music has several overtly Hungarian characteristics, especially in the matter of augmented seconds in the melodic lines. The hapless quondam archduke who became Emperor of Mexico, mistakenly believing himself to have been popularly elected, who attempted social and economic reforms, and who was eventually executed by the man he replaced, is commemorated in a powerful lament which emerges into triumphant optimism, in line with the quotation from an elegy by Propertius (Book 2, No 10) which Liszt placed at the head of the score: ‘In magnis et voluisse sat est’ (‘To have wished for great things is an accomplishment in itself’).