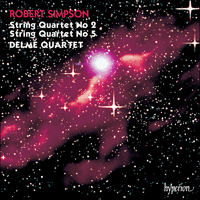 ‘When it comes to recordings of British string quartets there've been few more impressive achievements than Hyperion's Robert Simpson cycle’ (BBC Record Review)
‘Superbly done by the Delmé Quartet’ (The Guardian)
‘All of Robert Simpson's quartets are worth hearing. Don't ask for a recommendation of where to start! But do start, somewhere’ (Fanfare, USA)
‘Fans of the composer, and all those who care about the continuance of the string quartet tradition, needn't hold back. These issues are self-recommending’ (CDReview)
'Une grabación estimable' (CD Compact, Spain)

Robert Simpson’s first three quartets date from 1951 to 1954 and form a natural sequence, both in terms of musical expression and tonality. No 1 displays the principles of ‘progressive’ or ‘emergent’ tonality; it moves from E flat to the opposite pole, A, where it concludes with an innocent, almost Haydnesque little dance. In a sense, Quartet No 2 begins where No 1 left off, with a happy dance-like tune, but this is attacked by inimical forces, which it fails to surmount. Whereas No 1 moved from one key to another, No 2 goes only from A major to A minor, and ends in darkness. The whole Quartet is dominated by a single pulse, over which different tempi are thrown. This idea, first introduced in late Sibelius, has proved to be of considerable importance to Simpson’s creative thinking, from his First Symphony onwards, culminating in the vast structure of the Ninth some thirty-five years later.

In String Quartet No 2 (1953) there are three main ideas, all announced at the opening. The first is a chirpy, animated theme on the first violin in a brightly coloured A major. The second is a brief but threatening repeated-note tattoo low in the cello which momentarily disturbs the music, whilst the third is a contrasting, melodic ‘cantabile’, sung by the first violin against a sustained C major chord. The material grows, culminating in a short but full-blooded climax that suddenly gives way to a slower section begun quietly on viola and cello, which is based on a freely augmented version of the opening violin tune. However, this may not be evident to the listener at first, as the character of the music has been transformed into a mood of sombre, inward reflection. More passionate gestures disrupt the peace until a highly intense fugato is reached that looks forward to the language of Simpson’s later quartets. When this has subsided the final part of the work begins, representing, in the composer’s words, ‘the striving of the cheerful tune to recover itself after having run into trouble’. It makes a number of attempts, creating much tension as it collides fiercely with the tattoo figure. The last of these attempts forms the Quartet’s final climax, but the opening tune fails to establish itself securely, and the music collapses leaving only a sorrowful viola melody (foreshadowing the start of the Third Quartet) and a final, solemn cadence.

This Quartet was written for the Element Quartet, who gave its first performance.

As is well known, Simpson’s Fourth, Fifth and Sixth Quartets emerged from a deep study of Beethoven’s three Rasumovsky Quartets, Opus 59. It is important not to misunderstand this, however. It was suggested to Simpson at the time that he ought to write a book about the Beethoven Quartets, but he preferred to see what he could learn by means of music rather than words. The resulting works are not pastiche or slavish imitation; they are expressed in Simpson’s strongly individual language and amount to extended essays in variation, each Quartet being a variation on a whole work. If we listen to them in this fashion, we will profit from them greatly, and incidentally learn much from their models, to say nothing of variation technique applied on an unprecedented scale! Essentially they must be appreciated as quartets in their own right, without worrying unduly about the Beethoven connection, for each of the three Simpson quartets stands very strongly on its own two feet.

String Quartet No 5 (1974) is the most substantial of the three, and is dedicated to Angela Musgrave who later became the composer’s wife. As in Beethoven’s Opus 59 No 2, all four movements are in E, minor or major; this is one of many parallels. Another is a pervasive tension between the keys of E and C, reaching its crux in the Finale. In the opening ‘Allegro molto’, Simpson follows Beethoven by repeating not only the exposition but the entire development and recapitulation as well; the subtleties created by such a procedure are matter for a book, not a programme note, and Simpson’s are different from Beethoven’s because the material and the language are different.

In the first movement Simpson’s masterly ability to sustain powerful musical argument on a large scale is strongly evident, especially when considering that the tempo indication remains constant throughout. Like Beethoven, Simpson achieves force and mystery by following the opening declamatory chords with an active pause and a hushed, scurrying motif. The second group presents a nervous, syncopated idea that grows into a richly expressive cantabile. The development section is highly active also, cast in a crescendo, whose climax is the imposition of the opening chords above a stormy current of semiquavers. Despite the prevailing rough temper of the movement, the final bars disappear as E minor nudges C out of the way at the last moment.

The Adagio must surely rank as one of the most impressive quartet slow movements of this century. (The composer has made a number of small modifications to the published score, notably the removal of many accents and a change of notes in the violin parts in bar 142.) The music seems to be searching for peace after the turbulence of the first movement. There are many passionate outbursts and considerable tension at times, but always soothed in some way. Here is a good instance of Simpson’s supreme assurance in handling diatonic, lucid tonality in a freshly individual manner that never once sounds archaic or old-fashioned.

The third movement departs from the structure of the second Rasumovsky. Robert Simpson avoided imitating Beethoven’s habit of having a literal repeat of the Trio so that the main body of the Scherzo has to be played three times. Like Beethoven’s Scherzo, Simpson’s is an Allegretto, and its first section is relaxed. The Rasumovsky Quartet’s Trio includes a Russian theme at the request of its dedicatee; but Beethoven has deliberately made a joke of what was originally a majestic melody, subjecting it not only to an undignified tempo but to clashing counterpoint that doesn’t fit. All this happens twice. Simpson produces a jovial tune that soon becomes entangled in barbed-wire counterpoint with a violent swing of tonalities that takes on an almost nightmarish ferocity. His Trio is a crescendo, reaching a fortissimo with the return of the first part, now aggressive instead of gentle, with triplets stampeded into the texture. The second appearance of the Trio now becomes a diminuendo, and the fierce counterpoint is gradually smoothed over in the process, leading to a final return of the opening section, exactly as it was before.

In the Finale of the Beethoven, much humour is achieved by the music being continually pulled between C and E minor. Simpson’s Finale is driven by a colossal power and explosive energy, evoking a hurricane which keeps changing direction with the tonal pull. It opens with a blast of C major on viola and cello that is immediately supplanted by a whispering E minor on violins. This is the nature of the whole movement. There is a second subject which offers a brief melodic respite from this furious whirlwind of sound: a poignant high violin duet that soars above rhythmic configurations, but even here the momentum never falters. One feels that even if the dynamics are repressed, the music is ready to blaze forth at the slightest encouragement. This Finale makes enormous technical, physical and musical demands on each of the four players; the Delmé Quartet’s astonishing performance meets them all.