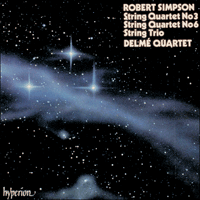 The three works recorded here span the entire range of Simpson's output to date. Both Quartets are part of two different trilogies. The first trilogy contains Quartets 1 to 3 (composed between 1951 and 1954) which seem to fall into a natural sequence. Quartets 4 to 6 date from the 1970s and were written under the direct influence of Beethoven's three Razumovsky Quartets, opus 59. The String Trio was completed in 1987 in between two of Simpson's most monumental creations, the Ninth and Tenth Symphonies.

String Quartet No 3
Quartet No 3 (1954) is incribed to Dorothy Hemming, the violist of the Element Quartet, 'A great lady and a great artist' — a frequent exclamation of Ernest Element when he wished to cadge a cigarette from her in rehearsals, but also a sincere opinion of her character and artistry! This Quartet is in two movements and traces a clear progression from C to E.

The opening movement is transparent in texture and is set in C major, but grief is its pervasive feeling. It presents two ideas that generate the thematic argument throughout. The first of these is an elegiac viola solo clearly demonstrating Simpson's masterly ability to create melody of the utmost simplicity that nonetheless retains a highly distinctive personal idiom. The second is a more chromatic, melancholy idea, announced by the first violin soon after against sustained lines on lower strings.

Fragments of both themes are often combined. After an impassioned climax the viola solo returns, but it is now expanded and has been transformed into a melody in which both themes are absorbed into a single line.

The second movement is an extended, vigorous sonata-allegro whose urgency and cumulative power is controlled with supreme skill, especially when considering the movement's broad design. A thrusting motive on violin and cello is hurled against repeated open fifths on second and viola, creating a full-blooded and weighty quartet sonority. At length the pulse broadens from two to three beats in the bar as a second group is presented: a graceful, singing melody whose repeated notes distantly recall Nielsen. This figure also appears in the development section which introduces a third theme consisting of an eloquent descending figure on violins. Though the dynamics are repressed for long periods during this part, there is a strong sense of latent energy as the themes are continually transformed into new shapes, thereby heightening the dramatic tension. The repeated notes become more insistent until the original fifths reappear marking the beginning of the recapitulation, yet even here the music is continually evolving. Highly-charged scalic configurations dominate the extended coda with powerful interjections (consisting of fragments from the original themes) culminating in a glorious canonic statement of the third theme on violins. The momentum created is considerable as the music is propelled to its emphatic E major conclusion.

String Quartet No 6
Robert Simpson provides the best introduction to the Sixth Quartet: 'The Fourth, Fifth and Sixth Quartets constitute a close study of Beethoven's three Razumovsky Quartets, op 59, that is to say, the attempt to understand those great works resulted in not a verbal analysis but music. The hope is that anyone studying intelligently the musical analogies offered here will find the experience of benefit in approaching and entering Beethoven's masterpieces … If these three quartets enhance understanding of the genius of Beethoven at their own expense, their purpose will have been served.'

In addition, it must be stated that none of Simpson's three quartets is in any way 'parasitic' and never do the Beethoven models hinder his inspiration. It is more a case that by close examination of the Razumovsky Quartets Simpson has added new spiritual dimensions to his own language. Anyone who has read Simpson's writings on the Beethoven symphonies will realise that he offers some of the most penetrating and illuminating thoughts on this master, and in Quartets 4 to 6 he shows the invaluable lessons that he has learnt from Beethoven.

Quartet No 6 (1975) opens with a single chord which contains two major seconds separated by a perfect fifth and a couple of octaves. This is a close analogy to the chord that opens Beethoven's Third Razumovsky, a diminished seventh, the famous 'Clapham Junction' chord that can resolve in almost any direction. Like Op 59 No 3, Simpson's slow introduction explores the many possible resolutions of this chord, creating a vast, awesome stillness. Each of the four movements opens with this chord either transposed and/or revealed gradually by successive instruments. The main scherzo-like Allegro enters suddenly with a jovial swinging tune full of dynamic contrasts strongly characteristic of the composer's rough humour. (If anything, the rhythmic impetus here resembles the Vivace of Beethoven's Seventh Symphony more clearly than that of the Op 59 Quartet.) Simpson's is a powerful sonata-allegro with the entire exposition written out in full 'just to make sure the players don't leave it out!' Much of the movement is governed by seconds and fifths, and from time to time ideas from the introduction drift past, still at the faster tempo, to provide a brief respite from the energy of the Allegro. After a varied reprise of the opening, the movement closes with a fierce accelerando recalling an upsurge of Haydnesque mock-anger!

Simpson's second movement, like the Beethoven, is disturbed and fitful, but is also one of the most hauntingly beautiful stretches of slow quartet music in his output. The movement possesses an almost timeless quality as it alternates between its three main ideas: the first a gently oscillating figure introduced imitatively on muted strings, the second a tenderly expressive phrase in A minor repeated twice, the third a more expansive melody high on first violin answered by viola.

Beethoven's third movement is a relaxed minuet, perhaps a nostalgie memory of the kind of music he heard clearly in his youth (on the sketches for Opus 59 No 3 he wrote 'let your deafness no longer be a secret, not even in art!'). Simpson felt that a minuet would not suit the idiom and preferred a canon, a double-canon in fact, a device which has its roots deep in the past. This canon, which is absolutely strict, is slow and contemplative with a deliberately animated middle section played pianissimo for most of its length. The grave beauty and sustained counterpoint seem to recall the late works of J S Bach rather than Beethoven.

The Finale is an athletic sonata-movement starting (like Beethoven's) with a fugato, soon merging into normal sonata activity. Like the second movement of Quartet No 3, this music is muscular and cumulative. Just as the music seems to be reaching its final climax it is halted by a high first violin G, and the lower strings enter pp outlining the Quartet's opening chord for the very last time, as if to emphasise its overriding significance. There is a final crescendo and the finale races through to a dynamic conclusion.

String Trio
The String Trio (1987) is dedicated to Jillian White of BBC Bristol and was written for one of her lunchtime concerts. It is subtitled 'Prelude, Adagio and Fugue' and like Quartet No 6 is governed by two intervals, thirds and fourths, which play a prominent role throughout. In the last decade, Simpson's language has been more concerned with achieving large-scale harmonie effects without closely adhering to keys, to make intervals, and often combinations of intervals, resonate over large structures because of the energy that generates vital ideas from them. The Trio demonstrates this clearly.

The Presto is light and kittenish, perhaps having something of the wit of a Mendelssohn scherzo, thirds and fourths being repeated in a very rapid succession in the opening violin solo. It is abruptly shortened by the Adagio, a more extended movement consisting of broadly flowing, solemn counterpoint. The intensity that the composer achieves in this section is highly impressive, all the more so considering only three instruments are being used. The Fugue, marked 'Volante' (flying), is the most substantial section of the Trio, beginning delicately on muted strings. After a sudden crescendo the Prelude's main theme returns angrily on violin, 'presumably out of resentment at having been truncated so early', as the composer has suggested, and a fearsome conflict ensues as themes from both movements fight it out. The work concludes in a torrent of explosive energy as thirds and fourths are forcefully reiterated on violin and viola above a gruff motive on cello and a final succession of 'flying' scales.