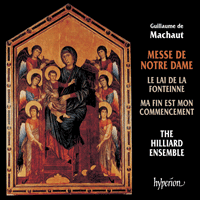 ‘Superbly recorded … very impressive indeed’ (The Penguin Guide to Compact Discs)
‘lt should be no surprise that this is a real winner’ (Fanfare, USA)

The celebration of mass is a rite whose central activities are unchanging: the daily ordering of words and movements at the core of which lies a mystery. We sup and dine on the flesh and blood of gods – God – in the guise of bread and wine, themselves distillations of the elements into which our own mortal remains will one day disappear. As David Jones put it (in The Anathemata, London 1952): ‘We already and first of all discern him making this thing other.’ Is this a creative or a re-creative act that the poet describes? And wherein resides the difference between them? If the art of music is to serve religious observance then it must surely enter into a comparable kind of communion, and must therefore be formed with a profound sense of order and imagination – the human and divine linked inextricably in a production of sound.

Music inherits its divine order from the art of number; indeed, it is Number made audible – infinity expressed in a finite stretch of time and space. It does so by rhythm (by pattern, repetition and variation, by extension, diminution and augmentation), and it does so through the articulation and permutation of tone (whether singly as melody, or in combination, in polyphonic or ‘many-voiced’ music).

The composers of what we (not they) call ‘medieval music’ were great craftsmen. How great can only be appreciated by trying to imitate them. Many remain anonymous, but one in particular, Guillaume de Machaut, is etched into the history of music, his status gladly acknowledged even by students and musicians who may not have heard a note of his music. Such is the power of nomination against anonymity. But Machaut not only merited this kind of recognition; he himself took steps to preserve his works in a form that gave them a distinct creative entity. These ‘works’ included not only music, but also a body of poetry of comparable significance. The durability of his fame rests on the twin nature of his talent as a maker of words and music separately and together. He may be seen as the culmination of an age-old song tradition where the art of poetry scarcely existed apart from its expression in song, but equally he is the author of substantial poems without any music and the composer of polyphonic music, a skill that existed and developed apart from the world of words once its outlines had been traced.

Not only the works themselves, but the fact and manner of their preservation are of significance too. Machaut ‘consistently portrays himself as above all a professional writer for whom the activity of composing poetry and music is closely linked with the physical aspects of the writer’s craft … We have moved one step beyond the accomplishments of the thirteenth-century scribes to something approaching the modern idea of the “book”’ (Kevin Brownlee, Poetic Identity in Guillaume de Machaut, University of Wisconsin, 1984).

Despite its central importance (and no doubt because of it) the Mass was not the first focal point of polyphonic activity. Composers attended instead to those texts which belonged to a special and usually festal occasion – the words proper to a particular day in the Church year. However, individual sections of the Mass were set to music, leading eventually to paired settings of the Gloria and Credo or Sanctus and Agnus Dei. Machaut’s setting is sometimes cited as the earliest complete setting of the Ordinary of the Mass (Kyrie, Gloria, Credo, Sanctus, Benedictus, Agnus Dei and Ite). There were other complete settings more or less contemporary with Machaut, but little to link the separate portions musically; only their purpose establishes a unity. And while this is less true of Machaut’s work, which goes some way further towards the Renaissance ideal of a Mass in which the separate sections are musically balanced and linked, there is nonetheless a considerable difference in style between the Gloria–Credo pair and the remaining sections. But as Machaut himself presented the work as an entity, we would do well not to quibble with him.

The composer of a Mass faces two kinds of text – the one short, having the conciseness of poetry, the other extended and having more the lineaments of prose. Machaut honours these differences and employs two quite distinct techniques for them. The Kyrie, Sanctus, Benedictus, Agnus Dei and Ite are written as self-contained, abstract formations that would make sense even if played on instruments rather than sung, while the Gloria and Credo are constructed in accordance with the phrases of the text, in effect inventing a musical style to match the irregular patterns of prose, punctuating its lines with flourishes and occasionally halting to meditate on a name: ‘Iesu’ in the Gloria (twice) and ‘Maria virgine’ in the Credo. This latter style is derived from conductus, a syllabic method of ‘free’ composition, though Machaut does in fact use plainsong as a source for continuous melodic variation in these two sections.

The other dominant style is that of isorhythm, where the tenor part (quoting the original plainsong directly) is broken up into phrases of identical rhythmic patterns. These patterns may be quite short, as they mostly are here, or can be stretched over long periods (as they came to be in the late medieval motet). Machaut uses this technique to create larger patterns – articulations in sound of simple yet powerful symmetries. The upper voices are faster moving and more freely conceived (though they too show the influence of careful overall structuring) and take much delight in hockets – but despite our natural tendency to do the opposite, this music may perhaps best be listened to from the bottom upwards.

Machaut’s home town was Rheims and, despite travels abroad as secretary to John, Duke of Luxemburg and King of Bohemia, his relationship with the town and its cathedral may well have been lifelong, and he is known to have lived there from about 1340. Amongst other benefices he was installed as a canon of the cathedral in 1337 and contributed to a fund for the building of the Lady Chapel – for which very possibly his famous Mass ‘de Nostre Dame’ was composed.

Le Lai de la Fonteinne (‘The lay of the fountain’) is in essence a prayer and hymn of praise to the Virgin and a meditation on the nature of the Trinity, likened by the poet to a fountain. The fountain itself, the stream flowing from it and its source are three apparently separate things, which in reality are one: God the Father is the source, the fountain is the Son, and the stream is the Holy Ghost. The cleansing and thirst-quenching properties of water, its strength to remain itself even as ice or vapour, the fount of harmony and purity – all are invoked as images uniting in the vision of the Virgin as the true foundation of faith: ‘just like water the sweet fruit of life took on human flesh and human shape in your empty womb’.

The lai was a major form of earlier medieval song-poetry and it is not surprising to find Machaut inheriting the tradition. What is surprising is to discover that four of his lais are polyphonic, though always derived from the single line of a solo singer. Le Lai de la Fonteinne has twelve stanzas, the standard number, which subdivide conveniently into six monodic and six polyphonic sections, alternating these textures throughout. The use of three voices of course reflects the lai’s subject and the three-in-one principle further reflects the particular substance of given stanzas, as does the canonic nature of the music – one voice makes three which are in fact but one.

Such play with words, with numbers, and finally with sound itself is not mere play, but a vitally serious and profoundly inevitable interplay of artistic invention and the recognition of eternal necessities, truths, that surround us and support us. They can be loose and flexible, utterly fluid, yet are ultimately irresistible. Man seeks to harness this force, to reflect it in his own works, by careful construction in accordance with the immutable laws of number and physics, which in turn free him to create and recreate those games of light and darkness that we call the arts.

It seems fitting to conclude this recording with Ma fin est mon commencement (‘My end is my beginning’), a rondeau whose text explains itself – a retrograde canon in words (almost) and music – as well as rehearsing the famous thoughts of Dante and St John. Or as the French lightly put it: ‘Plus ça change …’