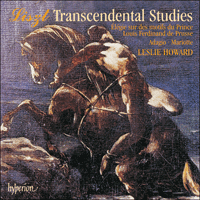 Pianists can count themselves very lucky, compared with most other instrumentalists, that the music devoted to the development of their performing technique has been provided largely by a group of composers whose pedigrees are beyond criticism. Cellists have to contend with the likes of Piatti, violinists have the honourable exception of Paganini in an otherwise undistinguished list, and wind and brass players have to work through unbelievably unmusical exercises. The best of piano studies, and there is very little reason why pianists should ever play less than the best studies, are written by composers whose overriding duty is to produce good music, with the technical instruction matched by the possibilities for musical development. So ‘studies’ by Chopin, Liszt, Alkan, Busoni, Bartók, Rachmaninov, Prokofiev, Scriabin, Stravinsky, Glazunov, Lyapunov, Lutosl/awski, MacDowell, Heller, Szymanowski, Dohnányi, Mendelssohn, Henselt, Rubinstein, Smetana, Debussy or Moszkowski are of the highest musical quality, whilst they exploit various technical problems with varying degrees of relentlessness. For example, where Chopin frequently derives a whole study from one particular technical point, most of Liszt’s are expanded works which require changes of texture to sustain the larger structures.

The history of the Transcendental Studies is tolerably well known, but may be briefly recapitulated here. In 1826, not yet fifteen years of age, the young prodigy published the first instalment of what promised to be an ‘Étude en 48 exercises’ in which Liszt intended to run twice through all the keys in the pattern C major, A minor, F major, D minor, etc, and the volume included twelve short studies of considerable flair, somewhat under the influence of his teacher Czerny (whose many studies are not quite of the calibre of the others mentioned above, however useful for younger players!) but showing much melodic invention and technical skill. (The remaining thirty-six were never composed, so the set of keys used remains within the flat side of the circle of fifths. Interestingly, Lyapunov’s twelve Transcendental Studies, written in Liszt’s memory, complete the cycle of keys.) In 1837, at the height of his Glanzperiode, Liszt took these little pieces (variously published as opus 1 or opus 6) and developed a formidable set of studies which, as Schumann noted in his laudatory review, were probably too difficult for anyone other than Liszt to play musically. The essential musical poetry of the pieces was rescued by Liszt from the more extreme technical demands in the final version published in 1852, in which the pieces become by no means easy, but much clearer in musical intent. The D flat study of the 1826 version never reappeared, but was replaced by the original E flat study transposed and much extended. The E flat study in the 1837 set is, therefore, new, but uses a fragment from the introduction to Liszt’s early Impromptu on themes of Rossini and Spontini, opus 3. The D minor study was reissued some time before the final version, with the title Mazeppa and a dedication to Victor Hugo. In the final version, titles are appended to ten of the pieces. Of course these titles are only guides for performance rather than clues to the sources for Liszt’s inspiration, but they are evocative enough, and often uncannily paraphrase the atmosphere conjured up by the music. The second and third versions of these studies both bear a dedication to Czerny. Liszt exploits every then-known device of piano technique in a set of original structures in which the dramatic argument is often heightened by harmonic tensions and juxtapositions very daring for their day.

Preludio is really a warm-up exercise, quickly whipping up and down the keyboard to set the scene. The second study, without title, is a formidable capriccio with alternating hands and risky leaps which give a kind of reflection of Paganini’s virtuosity on the violin, though it must be added immediately that the notion that Liszt’s transcendental technique arose as a result of attempting to imitate Paganini’s effects is an oft-repeated canard. Paysage (Landscape) is a tranquil and intimate tone-painting, far removed from the little toccata that was its original form in 1826. (The 1826 versions contain little more than the melodic basis for the later sets, and in the case of Mazeppa, only the harmonic outline of the main theme.) Mazeppa, familiar from Byron and Hugo, was a Polish page, bound to a wild horse which released him only when, having galloped to the Ukraine, it died from exhaustion. The story adapts well to the piece, which is almost a set of variations, with an excellent thematic transformation of the opening theme into the gentler central section, and which eventually lead to the eponymous symphonic poem which Liszt published in 1856.

Feux follets (Will-o’-the-wisps) is the most intricate of the studies, at one level a notorious double-note study, at another a mystical half-lit piece full of strange modulations. Vision is a broad, grand piece, very imposing in its use of arpeggio and tremolo, and Eroica is a triumphal march full of octaves. Wilde Jagd (Wild Hunt) is marked ‘Presto furioso’ and in the matter of leaps is the most reckless of the studies, beginning with jagged cross-rhythms which are later contrasted with a more four-square, fanfare-like theme.

The last four studies are among Liszt’s finest works. Busoni’s epithet ‘like a packet of yellow love-letters’ is among few such bons mots about music that could ever be said to have hit the mark squarely, for Ricordanza is just that, with its old-fashioned operatic melody (marvellous tune for a boy to have written in 1826!) and its tender figurations. The great F minor study is well described by its direction ‘Allegro agitato molto’, and is the only example of a standard form in these studies—sonata form, with two subjects strongly contrasted in character and tonality, and rigorously developed. Harmonies du soir conjures up far more than peaceful scenery and distant bells, creating almost an orchestral dimension of sound as each theme is extended to cover the whole compass of the keyboard in the fullest Romantic grandeur. Chasse-neige (Whirlwinds of snow) achieves its grandeur by its very relentlessness, in which bleakness is conveyed by constant tremolo, and the blurred Impressionistic effect is heightened by the pedalling chromatic scales into the prevailing texture. That Liszt’s intentions were musically irreproachable is borne out by his clear rejection of any kind of applause-raising coda to the set: Chasse-neige ends imposingly but firmly without any change of mood.

The remaining pieces are offered by way of rare Liszt encores. Élégie sur des motifs du Prince Louis Ferdinand de Prusse reminds us of the musical endeavours of many a nineteenth-century European royal—and Liszt knew most of them personally!—in a little piece, the origins of whose motifs, extended by Liszt into winsome melodies, remain unknown to the present writer despite much investigation! (The Prince (1772–1806) is best remembered as the dedicatee of Beethoven’s Third Concerto.) The Élégie dates from 1842 and was published in the present revised version in 1852 with a dedication to the Princess, who had furnished Liszt with a collection of her late husband’s music.

The Adagio, in C major, is an example of a musical autograph, signed and dated by Liszt, in the album of an unknown lady, preserved in an archive in Prague, and now published in the 1988 Liszt Society Journal in London—and based on a theme which all Lisztians will recognize as the second subject of the Dante Sonata. Mariotte—Valse de Marie is an undated leaf (probably from the early 1840s) found amongst Liszt’s correspondence with Marie d’Agoult, his long-time mistress and the mother of his children, and is an utterly charming trifle.