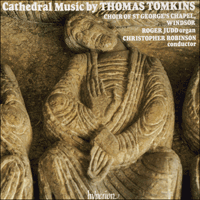 Thomas Tomkins’s father was Master of the Choir at St David’s Cathedral, Pembrokeshire, and it was there that Thomas was born in 1572, and received his early musical education. About 1594 he was sent to London to study with William Byrd, and in 1596 he was appointed Master of the Choir of Worcester Cathedral.

After his training with Byrd, Tomkins maintained close ties with London: dedications of his many secular works show that he was on good terms with the leading court musicians, and in due course he became a Gentleman of the Chapel Royal, succeeding William Hooper as one of the organists in 1621, and becoming senior organist and composer on the death of Byrd in 1623. The responsibilities of the two posts, and the wearisome travelling between them, seem to have led Tomkins to withdraw from his Chapel Royal commitments about 1628 and devote himself exclusively to his Worcester duties.

Tomkins served Worcester Cathedral for fifty years, until the Civil War brought an end to the services in 1646. By now in his seventies, a widower, and without a regular income, he lived on in his house in the cathedral precincts until 1654 when he moved a few miles out of the city to his son Nathaniel’s home in the village of Martin Hussingtree, where he died two years later.

Tomkins wrote a large quantity of vocal music, as well as many works for keyboard and instrumental ensemble, and a good deal survives in sources from the composer’s own lifetime, attesting to its popularity with his contemporaries. By far the most important repository of his church music, however, is the posthumous collection published by Nathaniel in 1668 under the title Musica Deo Sacra. As well as five settings of the morning and evening canticles, and some miscellaneous service music, this contains ninety-four anthems. It thus constitutes the largest single source of early seventeenth-century church music and is of inestimable historic and artistic importance. There can be little doubt that Nathaniel’s main purpose was that the collection should be a monument to his father’s work, since it would have had limited practical value for post-Restoration choirs. Before the Civil War, English church music had developed slowly along the lines established by Byrd and his contemporaries, ‘learned’ polyphony being composed in England long after the style had been superseded in Italy and elsewhere. After the Restoration, the more progressive choirs favoured a different kind of music which could be performed by small groups (trained singers being in short supply) and which reflected the latest Continental practices.

About half the anthems in Musica Deo Sacra are described by Tomkins as ‘songs to the organ’, or verse anthems, where various combinations of solo voices alternate with the full choir. The prominent and sometimes complex organ accompaniments are indicative of Tomkins’s mastery of the instrument. The remaining pieces are ‘full’ anthems which could, in theory, be performed unaccompanied, although in practice it is more than likely that the organ was used to double the voices.

The full anthem O sing unto the Lord a new song is a comparatively early work, dating from before 1617. After a conventional imitative opening the seven-part choir is divided to create emphatic antiphonal effects. In the rather less well-known of the two David laments, Then David mourned, Tomkins contrasts the three men’s voices with divided high trebles to depict the extreme emotional state of the grief-laden text. The effect is reinforced by the use of drooping melodic motives. Without doubt Tomkins is at his best when setting texts of passion and sorrow such as this.

The verse anthem My beloved spake sets a text which in the English church became particularly associated with Rogationtide. A solo quartet of two trebles, alto and bass alternates with the full four-part chorus. Tomkins exploits the textual similarity of ‘Rise up my love …’ and ‘Arise my love …’ by using related musical ideas at these points to create an effective formal design. Among the numerous ‘madrigalisms’, the unusual modulation at ‘give a sweet smell’ is particularly striking. The soloists here are treated as a chamber ensemble, but in Above the stars my Saviour dwells (‘An hymne’) prominence is given to a single voice, the end of each couplet being merely echoed by the chorus. This technique is extended in the final section where the choral entry on ‘come, Lord Jesu, come away’ is preceded by a passage for six solo voices. The fact that there are instrumental parts in one of the sources makes it likely that this anthem was written for the Chapel Royal where suitable players could easily be found.

Of the five service settings in Musica Deo Sacra, the first two are comparatively short and simple, while the fourth and fifth are fully-fledged verse services with independent organ parts. The Magnificat and Nunc dimittis of the Third Service (sometimes known as the ‘Great’ Service) explore the contrasts inherent in the alternation of solo and choral ensembles, both of which are at times in six parts. Tomkins achieves a complex and highly-wrought musical fabric without sacrificing textual clarity. Motivic fragments, cleverly combined in imitative polyphony, often reflect the text in a vividly pictorial way. The frequent false relations, so much a feature of Tomkins’s style, are not so much an expressive harmonic device in this case as the outcome of linear contrapuntal relationships. These two canticles are among Tomkins’s greatest and most characteristic achievements.

So far as we know, Tomkins never wrote a complete setting of the Communion Service. Musica Deo Sacra contains a setting of the Sanctus, as well as the Gloria performed here; both, of course, with English texts. Glory be to God on high is, in many ways, indistinguishable from a verse anthem, but the length of the text renders Tomkins’s usual repetitions undesirable, and there is in consequence a rather higher proportion of simple chordal writing than is usual in his work. The rich sonority of a seven-part chorus is used to good effect in creating a fine sense of climax.

Almighty God, the fountain of all wisdom is one of the collects provided by Cranmer for use after the Offertory on days when there was no communion. The poignant closing lines of this fine anthem make full use of Tomkins’s favourite technique of sequential repetition of short motives. Again, as in the Third Service, false relations are much in evidence, but here perhaps with more expressive purpose. There is throughout a bold use of dissonance, and sometimes unusual harmonic progressions. Even greater expressive heights are reached in the second David lament on this recording, the five-part setting of When David heard. This first appeared in Tomkins’s own madrigal collection, Songs of 3, 4, 5, and 6 parts (1622), where it was dedicated to his friend Thomas Myriell, who had included some of his works in an earlier manuscript anthology. After hearing a performance in Oxford (which presumably used a mixture of voices and instruments), a contemporary observer wrote: ‘The melodious harmony … when I heard it in the Music School, whether I should more admire the sweet well-governed voices, with consonant instruments, of the singers, or the exquisite invention, wit, and art of the composer, it was hard to determine.’ Nathaniel Tomkins nearly omitted this fine work from Musica Deo Sacra, it being added only when the errata sheets were being printed!

Most of Tomkins’s texts came from the Prayer Book or Cranmer’s Psalter. My shepherd is the living Lord, however, was drawn from the metrical version of Psalm 23 contained in the popular sixteenth-century collection of Sternold and Hopkins. Unfortunately, to modern ears this text may seem more quaint than inspired. As in Above the stars, a single solo voice is given prominence for the first verse, while the second verse section is a duet, with intricate writing for the organ contrasting with the rhythmic simplicity of the voice lines. It may be observed in passing that the design of every one of Tomkins’s verse anthems is in some way unique, either in the number and combination of solo voices, or in the role assigned to the chorus.

Sing unto God is surely another verse anthem which was written with a particular singer in mind. The extended bass solos make considerable demands on the performer’s range and agility, while the angular melodic shapes and lively rhythms are a fitting response to the vigorous text. The extrovert style of this music, and its inclusion with string parts in Myriell’s anthology, suggest that it was written during Tomkins’s early years at the Chapel Royal. By contrast, the reflective Behold, the hour cometh uses smooth melodic lines in an appropriately restrained treatment which concludes with one of Tomkins’s most beautiful settings of the Amen.

Like most of the other large-scale full anthems, the setting of O God, the proud are risen against me is a comparatively early work. After an extended imitative opening Tomkins mingles chordal and polyphonic textures with the various antiphonal affects available from an eight-part chorus. The contrasts of mood inherent in the text clearly determined the rhythmic and melodic design of the music. Especially noteworthy is the way in which the harmonic motion is increasingly held back at ‘slow to anger’.