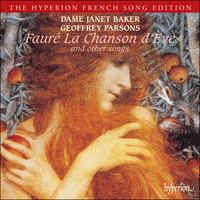 ‘This varied and generous selection of 28 songs is perhaps the best general introduction to this important side of Fauré's output and is also one of Geoffrey Parsons's finest recordings: voice and piano seem always to be at one. A magical disc’ (BBC Music Magazine Top 1000 CDs Guide)
‘Deeply considered and deeply moving performances’ (BBC Record Review)
‘A performance to treasure’ (Opera Now)

Was Ravel exaggerating when he described Gounod as ‘the true founder of the mélodie in France’? I think not. Of course, no art exists in a vacuum, and a number of elements fused together to create what is known as the mélodie. It happened that these elements crystallized in the songs Gounod wrote.

The forerunner of the mélodie was the eighteenth-century romance or ballad, a simple strophic form which usually spoke of love and often had a pastoral flavour. The tune was straightforward and without flourish. Early in the nineteenth century a number of variations appeared in the shape of the bolero, the tarantelle, the barcarolle, and even in the dramatic scène. The Swiss composer Louis Niedermeyer who settled in France wrote a setting of Lamartine’s Le Lac which became so popular that royalties from it enabled him to found the École Niedermeyer, that celebrated music school where he planned to train organists throughout France. Fauré was among the pupils there at one time, though by an amusing irony the École Niedermeyer produced several outstanding operetta composers such as Messager and Audran who, far from proselytizing for Palestrina and Lassus, were to make their mark in a notably secular sphere.

Berlioz was the first important composer to take up the emergent mélodie and to expand it far beyond the scope of the old romance, particularly in his Nuits d’été. When we come to Gounod we find the new style in full bloom. Among the influences that marked his handling of the mélodie were Italian song, Mendelssohn and Schumann. These were assimilated and made into something characteristically French with, on occasion, forward-looking harmonies that anticipate Fauré. Tact, a sense of proportion, unassuming workmanship and limpid grace are the signs of Gounod as founder of the mélodie. In his hands it becomes as typically French as the Lied is typically German.

Gounod was Fauré’s model, and although the latter in time soon progressed far beyond the achievements of the old master he cherished a lifelong affection for him. A strange man, Fauré, whose reticent character was full of paradox. Generally presented as an amiable, avuncular figure, he nonetheless waged bitter and unforgiving feuds against the pianist Marguerite Long and the actress Sarah Bernhardt. Although portrayed as a loving family man, he chose to take long holidays on his own far away from wife and children. He was a musical innovator and yet he detested avant-garde painting and execrated the revolutionary sculpture of Rodin.

He belongs to that great trinity of composers who brought the mélodie to a fine flower of perfection, the others being Duparc and Debussy. His development is well charted by the songs on this record. The journey begins with Le papillon et la fleur, an innocent little effusion from his Opus 1 of 1865 when he was twenty. It provoked a typically amused reaction from his friend and teacher, Saint-Saëns, who sketched on the manuscript a picture of a butterfly thumbing his nose at a flower. Glimmerings of the mastery to come are shown in Rêve d’amour, also written in 1865 and again to verse by Hugo. It is significant, however, that after the early songs Fauré never turned to Hugo again. His verse was too flamboyant, too spectacular for the composer’s subtle and delicate style. Equally tentative are the other pieces that belong to 1865 such as Aubade, Après un rêve and Barcarolle.

It was with Le Voyageur (1881) that Fauré really got into his stride, for although Armand Silvestre was by no means a great poet his lines inspired Fauré with a true sense of romance, as is the case with Toujours (1882). Les Berceaux (1883), to words by Sully-Prudhomme, ingeniously evokes the rocking of the cradle and of the fishermen’s boats and contains those novel, quite unexpected harmonies which are so typical of Fauré’s maturity. By contrast, Le Secret (1883) is deceptively simple, bare even, as austere and sparing of resource as Aurore (1886). A lusher tone is sounded by Les Roses d’Ispahan (1886) which is tinctured with a discreet orientalism that never relapses into mere sweetness. Apart from Les Présents and En prière, the years 1889 and 1890 were chiefly devoted to Verlaine, a poet in whom Fauré met his ideal. Debussy, too, set Verlaine, but Fauré’s approach is entirely different. He prefers to create an all-embracing mood rather than concentrate on a particular phrase, and in his settings of Mandoline, a poignant serenade in the manner of Watteau, and En sourdine, Green and Spleen, he catches to perfection the wistful nostalgia of a great French poet, translating it into musical terms that are exquisitely shaped and magically sensitive.

In the ten songs that make up La Chanson d’Ève, composed over a period between 1907 and 1910, Fauré reaches the height of his achievement. These mystical poems by the Belgian Symbolist poet Charles van Lerberghe stimulated him as fruitfully as had Verlaine. The deliberate imprecision of the verse gave him freedom to make some of his most daring harmonic experiments. In La Chanson d’Ève he conjured up the world of his dreams, a world where he celebrated the ecstasy of life and contemplated death with equanimity. He had come a long way from the simple jogging measures of Le papillon et la fleur.