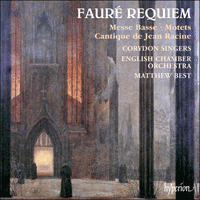 Understandably, the subject of death has tended to inspire composers to give of their best, particularly when writing major works such as settings of the Requiem Mass—the solemn liturgy sung in the Roman Catholic Church to honour the departed, to plead for merciful consideration of their sins, and to ask for rest for their immortal souls, (the word ‘requiem’, indeed, is best translated as ‘rest’).

There have been many settings of the Requiem text since the Gregorian plainsong version found in the Liber Usualis. Over forty are known to have been written up to the end of the sixteenth century, the most well-known ones being those by Ockeghem (the earliest surviving polyphonic setting, one by Dufay having been lost), Lassus (who wrote two), Palestrina and Victoria, whose 1605 Officium defunctorum is generally considered to be the last, and supreme, setting in the polyphonic style. In the Classical and Romantic periods many hundreds of composers set the text. Mozart, Berlioz, Verdi and Dvorák are perhaps the best known of these but the list also includes J C Bach, Michael Haydn and Leopold Mozart, as well as Cherubini (two, one being for the funeral of Louis XVI), Paisiello, Hasse, Jomelli, Campra, Cimarosa, Meyerbeer, Liszt, Donizetti, Gounod, Saint-Saëns and Bruckner (an early and immature piece). There was even a Requiem written for Mozart by Antonio Rosetti. The best-known settings of the twentieth century are probably those by Duruflé, Ligeti and Frank Martin.

The title ‘Requiem’ has also been given to works treating of the subject of death though not in fact settings of the traditional liturgical text. Instances of this are Brahms’s A German Requiem (using passages from the Bible), Britten’s War Requiem (using the traditional text interspersed with the work of English war poets) and Sinfonia da Requiem (written for orchestra), John Foulds’s A World Requiem, Hindemith’s Requiem (with words by Walt Whitman) and, from 1969, John Tavener’s Celtic Requiem (using liturgical texts, Irish poetry and children’s songs, and intended for the stage).

The style and personality of a composer, also, seems to focus particularly sharply when writing a Requiem Mass: thus Berlioz’s Grande messe des morts is a remarkable blend of simple, heartfelt tenderness and high romantic drama utilizing vast choral and orchestral forces including four brass bands and a phalanx of percussion; Verdi’s is passionate and fulsome, and has been described as his ‘best opera’. Also of interest is the fact that the personality of composers is often reflected in the passages of text to which they have given particular attention, or even which they have omitted altogether. Thus—to take as examples the two best-known French settings—whereas in Berlioz’s massive work the ‘Dies irae’ (‘Day of Wrath’) is a cataclysmic eruption of choral and orchestral force, in Fauré’s serene masterpiece this lengthy sequence appears not at all as a separate section.

Yet another reason, of course, for the high quality of many settings of the Requiem is the fact that they were called into being by the death of someone close to the composer by either blood or temperament. (It is significant that Dvorák’s Requiem, for instance, not written for any particular person or event, is not among that composer’s greatest works). Although a few sketches were made beforehand, most of the Requiem by Gabriel Fauré was composed after the death of his mother on 31 December 1887.

Fauré was born on 12 May 1845 at Pamiers, in the département of Ariège in the south of France. At the age of nine he entered the École Niedermeyer in Paris where he trained as a church musician, receiving a thorough grounding in the plainsong and modal harmony which were to become a feature of his mature style. From the piano classes held there by Saint-Saëns he acquired a knowledge of contemporary trends in composition. He graduated in 1866 and became in turn organist of St Sulpice and choirmaster (eventually organist as well) of the church of the Madeleine. In 1896 he was appointed professor of composition at the Paris Conservatoire, but he tired of his career as organist, choirmaster and private teacher and found fulfilment only at the age of sixty when the Conservatoire made him its Director. He died in Paris on 4 November 1924 at the age of seventy-nine.

In spite of Poulenc’s waspish dismissal of Fauré’s Requiem as ‘one of the few things I hate in music’, it is indisputably the composer’s most popular work. He began to plan it in 1887 when he jotted down some random ideas in a series of pocket-books. These books reveal that the Requiem was conceived, and the first part of it written down, in C minor—a tone lower than the three separate versions which were eventually completed. There is a rather pedestrian attempt at a ‘Pie Jesu’ in A minor (it returns a little too readily and often to its key-note), but Fauré rejected this in favour of the beautiful melody in B flat major which found its way into all the three versions (1888, 1893, 1900).

Among settings of the Requiem Mass, Fauré’s is unique. It does not adhere to the time-honoured liturgical text, and as the composer saw death as a gentle release from earthly life, the horrors of the Day of Judgement are almost disregarded. The ‘Dies irae’, whose torments Verdi represented in the most vivid terms, is reduced to a brief interpolation in the ‘Libera me’ (‘Deliver me, O Lord, from eternal death’), and the work is serene and contemplative, the text purposely chosen to emphasize the word ‘requiem’.

Fauré had no particular reason for writing the Requiem, but while it was in the early stages of composition his mother died, and the first performance, which took place at the Madeleine on 16 January 1888, was a timely memorial. Only five movements were ready: ‘Introit and Kyrie’, ‘Sanctus’, ‘Pie Jesu’, ‘Agnus Dei’ and ‘In paradisum’. The forces required were modest: a mixed choir (with divided tenors and basses), a treble or soprano soloist, and an orchestra comprising lower strings (violas, cellos and double basses), harp, timpani and organ. There is a single violin to play a solo in the ‘Sanctus’, and the organ part is crucial and continuous.

In 1889 Fauré completed the ‘Offertoire’ (part of which he later re-used in the ninth of his piano Preludes, opus 103) and revived a ‘Libera me’ originally written twelve years earlier as an independent piece for baritone voice and organ. Horns, trumpets and trombones were added to the orchestra, the horns having a particularly important role in the ‘Libera me’ and an effective fanfare in the ‘Sanctus’. A baritone soloist was now needed for both the added sections, and this seven-movement version was presented, again at the Madeleine, on 21 January 1893.

It was not until 12 July 1900 that the third, and final, version of the Requiem was performed at the Trocadéro in Paris, with woodwind added to the orchestra and a full body of violins in the ‘Sanctus’, ‘Agnus Dei’, ‘Libera me’ and ‘In paradisum’. But the extent of Fauré’s involvement in this final version is unclear. The orchestra has become unwieldy and various liberties have been taken with the scoring, possibly by Fauré’s pupil Roger-Ducasse. It is hard to believe that a composer of such fastidious judgement as Fauré would have given it his approval. The 1893 version recorded here would seem the most convincing compromise.

The work has been described by Jean Chantavoine as ‘a paradisical imagining with no trace of torment or of doubt, scarcely even of mourning’. Temperamentally, Fauré could not tackle a detailed picture of Hell in a ‘Dies irae’, or portray a terrifying scene of anguish. His primary concern was the beauty of his music. The terrors of the afterlife are hardly more than touched upon, and the untroubled mood of the final ‘In paradisum’ differs from, say, a work like The Dream of Gerontius in the absence of any notion of Purgatory. The music of Fauré’s Requiem evokes comfort, dwelling on the fundamentally good nature present in everything.

The Cantique de Jean Racine, dedicated to César Franck, is an early work, dating from 1865. A reticent piece for four-part mixed choir and organ, it won the composer the first prize for composition at the École Niedermeyer, where at that time he was still a student.

The Messe Basse (infelicitously named since, strictly speaking, a ‘Low Mass’ is one without music) had an even more complicated birth than the Requiem. It was undertaken in 1881 as a joint endeavour by Fauré and André Messager (the latter best known perhaps for his ballet Les deux pigeons and the opera Madame Chrysanthème). Of the five movements (‘Kyrie’, ‘Gloria’, ‘Sanctus’, ‘O Salutaris’ and ‘Agnus Dei’), three (‘Gloria’, ‘Sanctus’, ‘Agnus Dei’) were by Fauré, the other two by Messager. The setting was for three-part female choir with soloists, accompanied by a harmonium and a solo violin, although shortly after the first performance it was orchestrated, mainly by Messager (Fauré scored the ‘Agnus Dei’). The final version, omitting Messager’s movements but with a new ‘Kyrie’ by Fauré and a ‘Benedictus’ based on part of the now-abandoned ‘Gloria’, was completed in December 1906. In this four-movement version (the one recorded here) the orchestral accompaniment was replaced by an organ. The music, entirely by Fauré, is technically undemanding and has a certain Gallic charm.

The two short motets both date from 1894, when Fauré was in charge of the music at the Madeleine and before he took up his professorship at the Conservatoire. The Tantum ergo, for three-part female choir with soloists and organ accompaniment, is one of three settings he made of the text. The Ave verum is a duet for soprano and countertenor (or tenor and baritone) with organ. Both are pleasant enough, if a little simplistic.