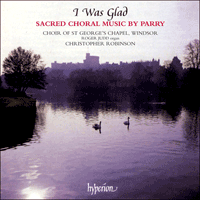 Choral music is of central importance in Parry’s considerable output. While most of his instrumental works have, at least for the present, lapsed into a sometimes undeserved obscurity, pieces such as his setting of Blake’s Jerusalem, and the coronation anthem I was glad, remain at the very heart of the English choral repertory, their nobility of character being discovered anew by each generation.

The selection performed here is representative of the entire span of Parry’s maturity. Moreover, these pieces illustrate well the complexity and diversity of his musical character. Outwardly, Parry epitomized the typical English country gentleman, but by nature he was a deeply emotional artist, and in his philosophy of life a radical thinker. He was, as R O Morris has said, ‘a mass of contradictions’.

Parry’s approach to the composition of church music is perhaps best seen as that of the outsider looking in. As a boy at Eton and later as a student at Oxford he was, of course, involved in the work of the chapel choirs, and wrote music for their services. Moreover, he was a gifted organist and while he was at Eton studied under Sir George Elvey, the organist at St George’s Chapel, Windsor. However, he subsequently held no church music appointments. On going down from Oxford he worked for a while in the City, continuing his musical studies privately, and was in his thirties before he began to be noticed as a composer, the turning point perhaps being the F sharp Piano Concerto and the choral cantata Scenes from Prometheus Unbound, both of 1880. The most powerful musical impressions on Parry up to that time were probably central European, and his approach to the treatment of texts owes more to Schumann and Brahms than it does to any English influences.

Since Parry’s professional career as educator and administrator kept him away from day-to-day involvement in church music, it is natural that the best known of his choral works should have been written in response to commissions for special occasions. However, his D major setting of the canticles does not fall into this category. Written about 1882 and first performed in the Chapel of Trinity College, Cambridge, the Magnificat and Nunc dimittis were only published as recently as 1982. This is big music in every sense, and was obviously written with a larger choir in mind than could be mustered by many choral institutions in the 1880s. Parry makes effective use of solo voices contrasting with the full chorus, while the texture ranges from an imitative counterpoint which throws each voice into relief in turn, to the richest of choral tuttis. As well as the obvious repetition of material, for instance the return of the opening music of the Magnificat in both Glorias, more subtle underlying relationships of theme and motive help to unify the settings. Prominent in these relationships are the intervals of the minor sixth and the octave. These large melodic intervals and the spacious grandeur of the Magnificat in particular make this setting quite uncharacteristic of the vapid and sentimental style of much Victorian church music.

Two of the pieces written for special occasions are represented on this recording. Hear my words, ye people was composed for the Festival of the Salisbury Diocesan Choral Association and first performed in Salisbury Cathedral on 10 May 1894. This extended anthem was meant to be sung by a large gathering of parish choirs and so the choral-writing had to be straightforward, particularly since rehearsal time for the combined choirs would be limited. The more technically demanding music was therefore reserved for the soprano and baritone solos, and the especially fine organ part. The soprano solo is particularly charming, but the most memorable part of the anthem is the final section where Parry provided a stirring tune for Sir Henry Baker’s metrical version of Psalm 150, ‘O praise ye the Lord’. This tune and text have subsequently come to be closely linked as a popular hymn. The passages for semichorus in the final section of the anthem were, one imagines, intended to be sung by the Cathedral Choir, the resultant contrast of choral sonorities being suggestive of a vocal ‘concerto’.

I was glad was written for the Coronation of Edward VII in Westminster Abbey on 9 August 1902. Parry’s setting of words from Psalm 122, which is sung at the entrance of the Sovereign, incorporated the traditional acclamation ‘Vivat Rex Edwardus’, sung by the King’s Scholars of Westminster School. In general use, of course, this section is omitted. Over sixty years had elapsed since Victoria’s Coronation, so it is hardly surprising that the elaborate ceremonial did not go entirely without a hitch. For some reason the signal indicating that the King had arrived was given prematurely, and I was glad was sung before the procession could begin. Consequently it had to be sung a second time—a rare distinction for a ‘first performance’!

The Coronation Choir consisted of some 430 men and boys, divided into Decani and Cantoris and placed on specially erected galleries in the north and south choir aisles. Since some of the singers could not see the conductor (Sir Frederick Bridge), sub-conductors were placed at strategic points to ‘relay’ the beat. With such a disposition of the singers, the double-choir writing which Parry used for ‘Jerusalem is builded …’ must have been particularly effective.

Parry’s setting of William Blake’s Jerusalem would seem, on the face of it, to be entirely characteristic of the composer’s ‘public’ image. Yet there is something rather more revealing about this choice of text. Its popular associations of national pride belie the passionate anger within Blake’s poem. These are the words of an idealist and radical which must have exerted a powerful attraction to a man of Parry’s convictions. Its first performance took place at a ‘Fight for Right’ meeting at the Queen’s Hall on 28 March 1916.

It has perhaps become a commonplace to think of a composer turning in upon himself towards the end of his life, yet this was certainly the case in the Songs of Farewell which were composed between 1916 and 1918. This is not to say that Parry had withdrawn from public life; far from it. His capacity for hard work remained undiminished even in his late sixties. He was still director of the Royal College of Music, a post which he had held since 1894, and was president of the ‘Music in Wartime’ committee which he had helped found in 1914 to provide opportunities for professional musicians to serve the war effort by giving concerts in hospitals, camps, and the like. Nevertheless, Parry found the war profoundly depressing; it was, in Herbert Howells’ words, ‘a scourge that cast a devastating shadow over Parry’s mind and heart’.

The six Songs of Farewell give us a glimpse of this private man, who sensed that his own life was drawing to a close; of his seventieth birthday he wrote, ‘I have reached the last milestone’. One feels that the religious impulse can never have been stronger than at this time, and yet these are not conventionally devotional works, although he called them motets. The sentiments and the mode of expression are, in several of the poems, personal rather than spiritual, and only ‘Lord, let me know mine end’ has a traditionally sacred text. Taken together, the Songs of Farewell are Parry’s masterpiece for the choral medium. In them he approached levels of musical expression and sensitivity to textual meaning and inflexion which have rarely been exceeded in English music. All the first performances were directed by Parry’s friend Hugh P Allen, who had succeeded him at the Royal College of Music and who did much to foster interest in his music in the early post-war years.

In terms of scoring and treatment the six pieces fall into three groups. ‘My soul, there is a country’ and ‘I know my soul hath power’ are written for four voices in a predominantly chordal style. ‘Never weather-beaten sail’ and ‘There is an old belief’, for five and six voices respectively, introduce a certain amount of contrapuntal interest. Finally, in ‘At the round earth’s imagined corners’ for seven voices, and ‘Lord, let me know mine end’, for eight, Parry takes full advantage of the flexibility of treatment available with these scorings in his use of contrasting registers, a variety of contrapuntal techniques, and rich choral sonorities.