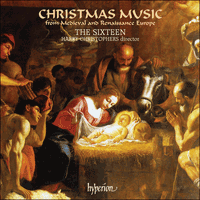 ‘A most unusual and attractive record’ (The Guardian)

The celebration of Christmas, as is well known to and very happily accepted by most Christians, is a development from pre-Christian and pagan festivities taking place around the winter solstice. In just the same way the music of Christmas owes many of its origins to the early secular accompaniments to such festivities. The word ‘carol’, so essentially part of Christmas, sums up the flavour of these medieval origins in its various definitions: first, from the French carole, a round-dance with music, later a joyous religious song; also a ring of standing stones, and also an enclosure or study in a cloister. Ezra Pound wrote that as poetry is dead if it departs too far from song, so music is dead if it departs too much from the dance; the essence of the carol, which pervades the choice of music on this record, is of music associated with movement, dance or procession, and music and words which are both popular and ecclesiastical. In medieval times the distinction between sacred and secular was deliberately blurred: there was a continuing need to counter still-pervasive pagan rituals (which might include a round-dance in the churchyard) by keeping the people entertained in their own way and, as has been well expressed, taking ‘some of the devil’s good tunes and giving them back to God’. Thus many carol tunes we know will first have been sung to ‘profane’ words; thus too the clergy of Sens Cathedral in France, for example, were explicitly allowed in the fourteenth century to dance, provided they didn’t lift their feet too far off the ground.

The principle of the carol is clear: a choral refrain, called ‘burden’, which begins and ends the piece and alternates with verses sung by one or more solo voices. The verses might often be sung to a modified form of plainsong, melodic enough in itself as we hear in Puer natus est nobis, from the Roman Missal, though the verse sections of Nowell, nowell: In Bethlem are as carefully composed as the refrains—an early example of a ‘popular’ carol written with a good deal of musical sophistication. The same delicious equivocation between sacred and secular is evident in Gaudete, drawn from a collection of church and school songs put together by Theodoricus Petri. Brought up in Turku, Finland Petri moved c1580 to Rostock in (then) Sweden where he published Piae Cantiones in 1582. Consisting of 73 Latin hymns and carols, this is a treasury of medieval tunes and words, most of traditional origin and gathered from all over Germany, Bohemia, and Scandinavia; many currently popular carols (among them Good King Wenceslas, to different words) come from this source, which was adapted by the great hymn writer J M Neale after a lone copy of the collection appeared in England in 1853, leading to an invigorating influx of European carol melodies. This sort of frank dance carol, at least half the devil’s work one might think, was only a part of the late medieval Christmas story. Alongside it in England were examples of high-powered ecclesiastical settings of religious texts destined to be sung by the professional collegiate or cathedral choirs. Walter Lambe, a scholar at Eton, moved to St George’s, Windsor, where in 1479 he became choirmaster to replace Thomas Gossyp who had died that summer of the plague (a reminder of how much more immediate in those days was the need to celebrate while there was time). Nesciens Mater uses the plainsong (sung here beforehand) as a cantus firmus, just as earlier carol composers would, but now surrounded with an incandescent tracery of voices, echoing if you like the Perpendicular architecture of Henry VI’s Eton (and King’s College, Cambridge) Chapel.

Yet another source of medieval Christmas music was the Mystery Play, typical in combining communal participation with powerful literary and musical material—as continues to this day in the northern festivals. Both the Song of the Nuns of Chester and Coventry Carol derive from this tradition, the latter’s harmony testifying to a more developed musical technique among the participants. Whether such musical skill could be expected of the scholars of Queen’s College, Oxford (Reginensi atrio) at the point in the Christmas feast when the boar’s head was brought in is debatable; the medieval origins of this processional carol are, however, indisputable, for the accession of James I to the English throne in 1603 saw the demise of the boar from courtly tables, as it was shunned in his native Scotland, being replaced just in time by the turkey from the New World. The carol as such fell into desuetude after Henry VIII’s time, until revived by Victorian antiquaries (though one notes that it was carried on in popular usage insidiously enough to have been banned by Cromwell); but the spirit continues in gloriously sophisticated form in church music, exemplified in Tallis’s great Responsory for the Feast of the Purification, where the ritual echoes of plainsong and polyphony hark back to the structure of the medieval dance.

We talk nowadays of the global village, but this is not the first time in modern history that boundaries have been easily crossed. The ‘English’ court was until the end of the fourteenth century effectively French, hence the easy accession of carole forms; and for some time longer Latin was the common language. And as we know, bush telegraphs work very efficiently. Thus it is not surprising to find that a traditional tune like Quem pastores, with its elegant dance-like and gracious air, was known early in Britain just as was In dulci jubilo, first printed here c1540. Probably the most famous macaronic (i.e. bilingual) carol we have, In dulci enjoys the legend that its writer (words, that is) Henry Suso, a mystic who died in 1366, wrote it at the dictation of an angel, after a dream that he was invited to join in an angelic dance.

Other continental composers joined in the dance too. Jacob Handl was an engaging-sounding character who after working in Melk and Vienna decided to take a sabbatical between 1575/9 travelling in Austria, Moravia, Bohemia and Silesia, living in monasteries and taking the opportunity to ‘understand the muse and meditate on the shepherd’s pipe’—one of the best comments, as it turns out, on the delightful ambiguity of the ‘designer carol’ of his age. But he transcends the genre, employing the full vigour of four-part polyphony (Pueri concinite), Venetian-style polychoral (O magnum mysterium) and beautiful harmonisation of a Piae Cantiones tune already popular in Germany (Resonet in laudibus). Quite independently, meanwhile, the carol repertoire had been developing elsewhere in Europe, and amongst the rich source of the villancicos (literally ‘peasant songs’) of Spain we find such as Riu, riu chiu, the title apparently an untranslatable cry such as you find in the songs of the Auvergne, a genuine shepherd song transformed into an irresistible dance. In France, Mouton, native of the Somme area and later chief composer to Francois I (whom he very likely accompanied to the Field of the Cloth of Gold to meet Henry VIII in 1520—such junketings as then went on were not complete without the best possible music) wrote a setting of Nesciens Mater which provides a fascinating contrast to Lambe’s: still the dazzling contrapuntal skill, as the plainchant melody underpins a quadruple canon, but now replete with calm reflection and gorgeous slow-moving harmony. Finally Lassus, the most celebrated musician in Europe in his time, doyen of the courts of the Netherlands, Italy and Germany, shows in his motet Omnes de Saba (collected and published by his sons in 1604), written for two 4-part choirs, that the devil probably loses out on the best tunes in the end.