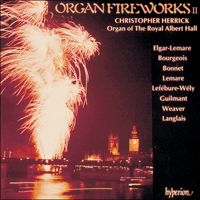 Organ of The Royal Albert Hall

‘The most stunning recording of this organ ever made. Buy it!’ (Organists' Review)
‘What a joy for organ fanciers’ (Which CD)

The cult of the organ virtuoso grew up towards the end of the last Century as industrial cities built prestige town halls and Citizens flocked to hear classical music played on their concert organs. Most of the music on this record was composed or arranged when the cult was in its heyday, but there are a few more recent pieces to demonstrate that the cult lives on …

Elgar Pomp and Circumstance March No 1
When Elgar's original orchestral version of this march was first performed in the Royal Albert Hall, Sir Henry Wood, the conductor, had to repeat it twice, if only to restore order, so tumultuous was the reception it received. The following year Edwin Lemare, one of the most dazzling organists of the age, arranged it for organ. That was in 1902, coronation year, and this march has come to be associated with the splendour, the pomp, and the greatness with which the British Empire was bedecked at its peak. It was apparently the newly acceeded King Edward himself who suggested that words should be put to the trio—the middle part—of this march. It was a tune which Elgar confessed he had 'carried in his pocket' for twenty years, a tune mature enough to carry the words 'Land of Hope and Glory'.

Bourgeois Serenade Op 22
Derek Bourgeois was born in Dulwich, studied music at Cambridge, and lectured in music at Bristol University for some years before becoming Director of the National Youth Orchestra. As a composer his energy is directed into major forms such as the symphony, oratorio and sonata, but he also has time for a joke in the true Haydn tradition and a sense of joie de vivre. His less 'serious' works incude a 'Wine' Symphony and a Cantata Gastronomica.

His Serenade has become very popular in an arrangement for brass band, but it was composed as an organ piece, a bridal march for his own wedding. It is the sound of steel drums that comes to mind, though, as the music unfolds, for this march swings in Caribbean style. As the number of beats in a bar becomes increasingly odd, the listener is left wondering whether the music was designed to amuse the composer's musical bride as she walked up the aisle, or confuse his eminent Director of Studies who was in the congregation. Certainly he would have been able to unravel a hint or two of a famous Bolero from the music …

Bonnet Elfes Op 7 No 11
Bonnet was a pupil of Alexandre Guilmant, and like him in that he pursued a double career both as an editor of early music and as a recital organist who excited international admiration. He established a strong reputation in North America and spent his last years there teaching the organ at the Quebec Conservatoire.

Elfes is one of a set of twelve Pièces nouvelles whose inspiration is both sacred and secular. Earlier in the set there is a piece named after Verlaine's poem 'Clair de lune', and by contrast a 'Prélude au Salve Regina', Elfes is as featherweight and elusive as the mythical creatures it portrays, and demands an equally featherweight virtuosity.

Lemare Concert Fantasia Op 91
This must be one of the few compositions to have been written on an Edison phonograph cylinder, although its gifted composer had really no need to make use of such a device to capture his inspiration.

Edwin Lemare was a highly trained musician, and his skill at the organ was that of the virtuoso. He was born and brought up at Ventnor on the Isle of Wight, and although his father was an organist it was his mother who pushed him to develop his musical abilities. By the time he was nineteen he made front page news in the London papers with his astonishing organ recitals at the International Inventions Exhibition. It was not too long before he was organist at the highly fashionabale St Margaret's, Westminster. But side by side with that success were rows, showing a lack of diplomacy which was to plague his whole career. His personal life also showed its instability when he eloped into his first marriage.

Unfortunately the incumbent who brought him to St Margaret's Westminster departed in a hurry and his successor literally had little time for music. Exit Lemare, to the life of a travelling virtuoso and to his first divorce. He travelled in Britain, Australia and the USA, commanding huge audiences. His adventures included missing the San Francisco earthquake by a day, and returning there when the city was rebuilt as the world's highest paid organist.

Harvey Grace, who was at one time organist of Chichester Cathedral, pointed out an aspect of Lemare's genius in this piece, namely his use of the technique of counterpoint (of which Bach was the pastmaster) to the extent of combining all three themes on the final pages. He went on 'Most of us would be satisfied when we had done this, even after the comsumption of midnight oil, but Mr. Lemare, with a casual 'while I think-of-it' air, plays at the same time Auld Lang Syne with the pedals.' … and that is just what happens in this music as published, transcribed by Lemare from his own improvisation to the phonograph.

Lefébure-Wély Sortie (Bolero de Concert) Op 166
Lefébure-Wély was born in Paris, living and working there through the whole of his adult life and gaining the distinction of the Legion of Honour for his services to music. He began his studies at the Paris Conservatoire when he was just fourteen years old, and excelled both at piano and organ. He went on to be organist at various important churches in Paris, but he also established himself as a composer, writing music for the opera stage, for the symphony orchestra, for chamber musicians, for the salon piano, as well as for the organ loft. Much of his organ music is extrovert, even flamboyant, in the mood of the period. He had an advantage in this respect in that his composition teacher, Halévy, was famed for his operas rather than for anything restrained and sacred.

The Bolero de Concert is no exception to the style which has drawn organists who need some light relief to the music of Lefébure-Wély. It was composed to entertain his pupil Madame la Comtesse B de Mouzilly who was evidently an exponent on the 'Orgue expressif', the French species of harmonium. The Bolero is registered for this instrument which has separate stops for the treble and bass ends of the keyboard.

Guilmant Fantaisie sur deux mélodies anglaises Op 43
If the English were for Napoleon a nation of shopkeepers, then for his compatriot Alexandre Guilmant they were evidently a people of 'Home, Sweet Home' and 'Rule Britannia'.

These are the two pieces on which this Fantaisie is based. After an introduction, 'Home, Sweet Home' emerges quietly before receiving a varied accompaniment from the flutes, answered, and with great dexterity, in some astonishing writing for the pedals. Then 'Rule Britannia' announces itself in fugal imitation to conclude the piece triumphantly.

This is music designed for self-display by its composer, who was also an international concert organist. The overt showmanship of the Fantaisie makes it difficult to believe that Guilmant was also a respected musicologist and the man who rescued much ancient French music from oblivion.

Weaver Passacaglia on a theme by Dunstable
John Dunstable was the greatest English composer of the first half of the fifteenth century and was at one time credited with writing a carol which has become known as the Agincourt Song, praising God for Henry V's famous victory. This carol has become adopted as a hymn tune, known by the original opening words, 'Deo Gracias'.

John Weaver lists his hobbies as railroads and mountain climbing, appropriate perhaps for one who has built his musical career around the mightiest of musical instruments, the organ. He wrote this Passacaglia in 1978 for the twenty-fifth anniversary celebrations for the state trumpets at the Cathedral of St John the Divine in New York City.

Lemare Scherzo from Symphony in G minor, Op 35
To progress chronologically through the organ music of Lemare is to discover works of progressively less consequence as the complexities of his personality caught up with him. The Symphony in G minor, published in 1899, comes from early in his career and bears comparison with those of his more famous French contemporaries.

This Scherzo has long been the most popular movement of the Symphony and is frequently played as a separate piece. It is in the major key and has a boldly energetic theme, conceived in march rather than minuet rhythm so that the central trio has a measure of 'Pomp and Circumstance' in its character.

Langlais Incantation pour un jour saint
The blind French organist and international recitalist was, with Messaien, one of the last pupils of Paul Dukas, but there is nothing of 'The Sorcerer's Apprentice' in his music. His style owes far more to another teacher, the organist and composer Tournemire. Inspiration comes firstly from his religious conviction, then, as in this Incantation, from Gregorian plainchant.

The chanted Incantation, announced after the opening fanfare, pervades the whole piece which comes from a chronological volume of music for Easter. The collection begins with a Chorale Prelude by Pachelbel and ends with this music by Langlais.