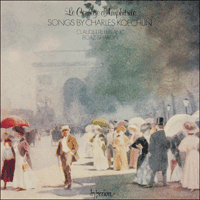 ‘Claudette Leblanc is a major recording discovery. A model presentation—landmark, classic, and indispensable’ (Fanfare, USA)
‘This really must be a find for those who wish to be captivated by some relatively unknown turn-of-the-century French songs’ (Hi-Fi News)

Charles Koechlin (1867–1950) was, until recently, better known as a teacher and pedagogue than as a composer. But as more musicians discover the delights of his vast and varied output through recordings, new publications and the efforts of his family and devotees, Koechlin has now become accepted as a powerful composer of great vision and originality, as well as a master orchestrator (Fauré’s Pelléas et Mélisande Suite, Debussy’s ballet Khamma) and a pioneer of polytonality.

Although born in Paris, Koechlin’s family background was Alsatian, rich and bourgeois. He inherited what he termed an Alsatian temperament—a mixture of energy, naivety and an absolute, simple sincerity that lies at the heart of his music and character. The key words in his artistic credo were freedom and independence, tempered of course by discipline and craftsmanship. In some respects, Koechlin was similar to Charles Ives in that music flowed from him in a ‘stream of consciousness’, completely without concessions or thoughts of commercial success, and both composers admired the transcendentalist philosophies of Emerson and Thoreau. Like Ives, Koechlin left a large corpus of sensitive and original songs that are still not widely known. Indeed, in Koechlin’s case, only Si tu le veux and the early rondel Le Thé might be said to have become at all popular, and the present disc offers an excellent opportunity to discover a representative selection of the rich treasury of Koechlin’s songs.

Koechlin was a late developer as a composer and needed the inspiration of poets early on in his career. Until he felt ready to enter the ‘perilous domain of chamber music’ around 1911, his first period was dominated by songs and choral music, and his harmonic evolution can be traced through this medium from relatively ordinary beginnings around 1890 to the polytonality of the 1905–9 songs (Opp 28, 31 and 35) that impressed and influenced Milhaud.

Koechlin seemed most at home with Parnassian poets like Armand Silvestre, Sully Prudhomme, Edmond Haraucourt (a personal friend) and their precursor Théodore de Banville (1823–91). Koechlin’s three sets of Banville rondels (Opp 1, 8 and 14) dominate his first decade as a song-writer, though they were not composed in their printed orders. Koechlin later referred to his rondels as ‘familiar music’ which ‘complied with my need for clarity and concision’ at a time ‘when several of my colleagues were turning towards Debussyism … My rondels, on the contrary … were the forerunners of the “reaction” declared by Les Six after 1914.’ In them, Koechlin claimed he had tried to translate musically ‘the lively, clear, spiritual, hyperbolic and occasionally fantastic colours of Banville’s poems … I sought, above all, the most faithful alliance of words and music, combined with a clear and precise form like that of the poetry.’

Most of the rondels are inspired by a Romantic concept of Nature: they avoid exact musical recapitulation, even when the opening lines recur at the end as a refrain. Some relate specifically to Paris, like L’Hiver with its striking glissandos and cold open fifths that evoke a wintry scene in the Bois de Boulogne. In Le Printemps, with its light evocative trills, Koechlin maintained that it was ‘a Parisian girl who was singing and it was her feelings that I sought to express’, whereas Miss Ellen in Le Thé (with her elaborately decorated Chinese teacup) was a young French girl Koechlin saw on holiday in Switzerland. This enchanting song (‘almost an improvisation’), together with Si tu le veux, shows that Koechlin could easily have become an acclaimed melodist of the belle époque (like Reynaldo Hahn) had he chosen the easy path to fame and fortune. In fact Si tu le veux originated as a setting of Silvestre’s superior ‘Chanson de Bertrade’ from Grisélidis (‘En Avignon, pays d’amour’), but Koechlin’s publishers (Hachette) thought it necessary to find alternative words before they would print the song. Ironically, this unusual concession on Koechlin’s part led to his most recorded composition! From Koechlin’s point of view Aux temps des fées (full of his favourite sensuous added-sixth chords) was a far superior song.

Between 1899 and 1907 Koechlin’s mature harmonic style developed towards the result seen in Le cortège d’Amphitrite. Here, fourth- and fifth-based chords, often superimposed to make a luminous, widely spaced, gently polytonal effect, present supreme problems for the pianist (Koechlin’s piano parts often seem to have been orchestrally conceived). Through the centre floats a timeless, supple vocal line like modern-day plainchant, using only narrow intervals and one syllable per note. Koechlin was particularly inspired by the evocation of Greek antiquity in the poetry of Albert Samain (1858–1900), and all the Op 31 songs come from Aux flancs du vase (1898).

The other poet favoured by Koechlin around the turn of the century was Verlaine, seven of whose poems he set in Opp 22 and 24. In La chanson des Ingénues we can see a softening of Koechlin’s harmonic idiom, perhaps as a reaction from the later rondels of 1896–9 (Op 14) which had tended towards rather aggressive, quasi-orchestral textures making extensive (and almost Wagnerian) use of the augmented-fifth chord.

The most striking aspect of Koechlin’s first-period songs is their sheer diversity, from the charming scherzo La Lune which pokes fun at the ‘enjambement beloved by the Romantics’ (by deliberately pausing at the end of each line when the sense of the words demands continuation), to the quartal harmonic complexities and long pedal-points of Améthyste. The first belongs clearly to the nineteenth century, whilst the second (written only ten years later) ranks amongst the most modern developments in twentieth-century harmony. By now all earlier traces of Massenet, Chopin, Liszt and Wagner have been shed, and even if Koechlin uses lush Debussyan chords in his Verlaine settings, in context the similarity is rarely, if ever, apparent. Koechlin’s fondness for irregular metres and phrasing has much to do with this, of course.

Thus songwriting enabled Koechlin to find his own original voice as a composer, and this development can here be properly appreciated for the first time. By 1910 Koechlin felt able to proceed on his path without vital inspiration and formal organization derived from a poetic source, and from then on songs are relatively rare in the midst of chamber music and symphonic poems (though these all have literary programmes). The Hymne à Vénus of March 1918 forms a pair with a setting of Claudel’s Dissolution (Op 68 No 2) in that both have descending quaver figures and unusually long piano codas. The Hymne à Vénus is the more lyrical of the two and ends in the same key in which it began (a rarity for Koechlin).

Between 1933 and 1938 Koechlin became fascinated by the stars of the early sound movies and in particular by the now-forgotten Lilian Harvey, in whose honour he composed 113 short piano pieces and the song cycle Sept chansons pour Gladys. These seven ‘pièces humoristiques’ with adulatory, faintly moralizing blank verse by Koechlin himself, celebrate Lilian’s performance as Gladys O’Halloran, the little newspaper vendor in Anatol Litvak’s film Calais-Douvres (1931). First seeing the film in the autumn of 1934 inspired four piano pieces for his album The Portrait of Daisy Hamilton (for which he also wrote a film scenario starring Lilian Harvey and himself). Then returning to the film on 26 August 1935 inspired ‘M’a dit Amour’ which grew into the cycle that marked the end of Koechlin’s 45-year songwriting career. In these songs, Koechlin made no distinction between Lilian’s screen and real-life personalities, and the ‘humorous and whimsical’ aspect can be seen in ‘Le cyclone’, where he makes an elaborate play on words between the identical surnames of Lilian Harvey and the Englishman who discovered the circulation of the blood! This point forms the only substantial climax in the cycle.

The element of sixteenth-century modal counterpoint that runs through much of Koechlin’s film music can clearly be seen in the linear ‘M’a dit Amour’, and ‘La naïade’ starts with a quotation from Beaujoyeulx’s Le balet comique de la Royne (1581), including such deliberate archaisms as ‘cuydois’ (think), ‘emmy’ (among) and ‘souëf’ (supple) in macaronic conjunction with a Latin paraphrase of Catullus at the close and the Americanism ‘lovely’ en route! Elsewhere Koechlin pokes fun at the banal endings of most commercial film scenarios and compares Lilian to Botticelli’s Venus within what must be one of the most unlikely and intriguing compositions of all time.