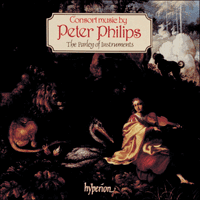 Peter Philips is the one first-rate English composer from the sixteenth and early seventeenth century who remains largely unknown today, even to specialists. His modern reputation has suffered from a form of musical chauvinism that works to the disadvantage of emigres: since he left England at an early age, never to return, he has been largely ignored by English musicologists, and equally he has been treated as a foreigner by their colleagues in his adopted country, the Spanish Netherlands — now Belgium. As a result, very little of Philips's music has found its way into print in this century, and still less of it has been recorded. Yet it is equal in quality to the best work of that richly productive period. His keyboard music invites comparison with Byrd, his consort music with Dowland, his motets and madrigals with Weelkes and Gibbons — or rather with Marenzio and Lassus, because his vocal music in particular belongs to the cosmopolitan European tradition. In his own time Philips exerted a considerable influence on composers in the Netherlands and Germany; his popular pieces like the 1580 Pavan and the Dolorosa Pavan were still being imitated and elaborated by followers like Nicolaus a Kempis as late as the middle of the seventeenth century.

Philips was born in 1561, probably in London. He seems to have been associated with Sebastian Westcote for in 1592 Westcote, the Almoner of St Paul's Cathedral, bequeathed 'To Peter Phillippes likewise remaining with me 5 li. 13s. 4d.'; he was probably a choirboy there. While at St Paul's he had evidently already begun to compose, for Francis Tregian dated his copy in the Fitzwilliam Virginal Book 1580 and added the comment 'The first one Philips made'. A few months after Westcote's death he left England for good, apparently because he was a Catholic. He travelled first to the English Catholic community at Douai and then went on to Rome where he remained for about seven years, first in the service of Cardinal Alessandro Farnese and then the exiled Catholic nobleman Lord Thomas Paget, with whom he probably travelled to Spain, France and the Netherlands. His setting of Cavalieri's famous ballo tune from the Florentine wedding intermedii of 1589 probably dates from this period. After Paget's death at Brussels in 1590 he settled in Antwerp, maintaining himself 'by teachinge of children of ye virginals, being very cunning thereon;' the grand and tragic 'Pavana Pagget' was probably written in his memory.

Philips's celebrated Dolorosa Pavan and Galliard appears to have been written in the autumn of 1593 when, after a visit 'to sie and heare an excellent man of his faculties in Amsterdam' — almost certainly the Dutch organist Sweelinck — he fell sick at Middelburgh. While he was recuperating he was imprisoned on suspicion of being a Catholic agent, when he wrote his magnificent chromatic work; one copy of the keyboard version is marked 'composta in prigione' (composed in prison) while another — Tregian's in the Fitzwilliam Virginal Book — is dated 1593. After his release he remained in Antwerp until 1597 when he entered the service of the Archduke Albert, Governor-General of the Netherlands. He remained there as organist at least until the death of his employer in 1621, and probably until his own death in 1628.

The bulk of Philips's instrumental music survives in copies made by the Cornish landowner Francis Tregian, a fellow-Catholic who was imprisoned for his religion in the Fleet prison from 1609 until his death in 1619. Tregian and Philips almost certainly never met, so their relationship, which seems to have been close, must have been conducted through intermediaries. Most of the music on this record survives in a section of one of Tregian's vast score-books entitled 'Canzone et Pavane di diversi'; it seems, in fact, to be a retrospective sequence of original compositions and arrangements by Philips, perhaps made for a consort at the Brussels court. Among them are pieces by English court composers including Thomas Morley, the recorder player Augustine Bassano and Tregian himself. Philips's own pieces include an Alman dedicated to Tregian (a gentle parody of cadential clichés) and a fine Pavan and Galliard in F, a work very similar in style to many of Anthony Holborne's five-part dances.

A curious feature of Philips's dances is that they mostly exist in two original forms – for five-part consort and keyboard. It is not immediately clear which came first. In some of the pieces, the Paget Pavan for instance, the consort version seems to provide the best working of the contrapuntal material; in others there is clear evidence that a solo piece was arranged for consort; the pavans by Morley and Bassano, for instance, are also known in Iute versions. Unfortunately, only a single treble part survives of Philips's five-part setting of his popular 1580 Pavan (though there is one by someone else in a German manuscript) so I have reconstructed it using his keyboard setting. An arrangement of another sort is found in the little Aria printed by Thomas Simpson, another English emigré, in 1621. Its simple style and AAB form suggests that it was originally a Iute song; the two-treble fourpart setting is apparently Simpson's work.

There are good reasons for thinking that Philips wrote his dances for a violin consort. Such ensembles were the first choice for dance music at most northern European courts around 1600, and used music laid out exactly as in the Tregian collection: five parts, with a single treble, three inner parts and bass, played respectively by violin, three violas and bass violin (the large ancestor of the cello, tuned a tone lower than the modern instrument). Philips would have been familiar with violins since his youth, for Sebastian Westcote bequeathed a chest of violins and viols to St Paul's 'to exercise & learne the children and choristers there.' His magnificent six-part set of variations on the passamezzo antico ground bass, however, uses a more modern layout with two equal trebles, and is thus probably a later work; it must, however, have been written by 1619, since it was copied by Tregian.

Over the past fifteen years the boroque violin, with its short neck, outcurved bow and gut strings, has become a familiar vehicle for the entire string repertory from Monteverdi to Mozart. But the instrument that we know as the baroque violin is really only appropriate for music of the last part of that period. Most baroque string players today use either modern copies of instruments by Stradivarius and his contemporaries or originals from the late eighteenth Century that themselves are copies (mostly by German and English makers) of these classic Italian models. The surviving violins of the sixteenth Century — like those made by Andrea Amati in the 1560s and '70s for the French court — are nearly as different from a Stradivarius as a Stradivarius in original condition would be from a modern instrument. They have still shorter necks and thinner sound-posts (or possibly no soundposts at all), they are more lightly contructed, and, most important, they are played with very light and short bows on plain gut strings. The result is a sound that is reedy, clear and lively — closer to the renaissance viol than to later violins, particularly when it is heard in consort. The Parley of Instruments' consort of renaissance violins uses violins and violas modelled on instruments of that period by Paul Denley and Bryan Maynard, and an original Italian bass violin restored by John Pringle.