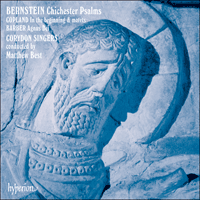 A man of phenomenal and wide-ranging musical gifts, Leonard Bernstein is one of the great figures of twentieth-century American music. Following his time at Harvard University he entered the celebrated Curtis Institute in 1941 where a friend said, (apropos his outstanding talent), ‘Lenny is doomed to success’. It was a true prophecy in that Bernstein’s many-faceted career has inevitably restricted the number of works he has composed and it was, therefore, most fortunate that the Very Reverend Walter Hussey, Dean of Chichester, chose such a propitious time to approach the composer to write a work for the 1965 Chichester Festival. Bernstein had decided to take a sabbatical year, free from busy conducting schedules, to meditate on the current state of music and his own attitude towards it. This freedom also allowed him to take up whatever creative venture appealed to him and Bernstein summed up his feelings at this time in an article which appeared in the New York Times of 24 October, 1965. Much of the article appeared in verse as the following short excerpt illustrates:

Of time to think as a pure musician
and ponder the art of composition.
For hours on end I brooded and mused
on materiae musicae, used and abused;
On aspects of unconventionality,
Over the death in our time of tonality,
Over the fads of Dada and Chance,
The serial strictures, the dearth of romance,
‘Perspective in Music’ the new terminology,
Physiomathematomusicology;
Pieces called ‘Cycles’ and ‘Sines’ and ‘Parameters’—
Titles too beat for these homely tetrameters;
Pieces for nattering, clucking sopranos
With squadrons of vibraphones, fleets of pianos
played with the forearms, the fists and the palms
—And then I came up with the Chichester Psalms.
These psalms are a simple and modest affair,
Tonal and tuneful and somewhat square,
Certain to sicken a stout John Cager
With its tonics and triads in E flat major.
But there it stands the result of my pondering,
Two long months of avant-garde wandering—
My youngest child, old-fashioned and sweet.
And he stands on his own two tonal feet.

The text of ‘Chichester Psalms’ is in Hebrew and the work opens with a powerful introit that appears again at the end of the first movement and at the end of the last. Unsurprisingly, the composer of West Side Story brings to the piece colourful word painting and vivid orchestration. Psalm 100 is set in an agitated and almost dance-like seven-four rhythm that contrasts fittingly with the opening of the second movement, a lyrical setting of Psalm 23 for boys’ choir and soloist. The alto solo is affectingly accompanied by the harp but when this attractive melody is taken up by the boys’ choir it is interrupted by fierce outbursts from the men’s choir: ‘Why do the nations rage?’ (Psalm 2). Although the boys resume their pastoral melody and the disturbance moves into the background the disquiet remains in evidence even until the end. The third movement begins with an orchestral meditation which features densely written string passages of compelling effect. The mood of the music finally yields to one of comfort for the setting of Psalm 131 and the work ends quietly with a unison Amen as a solo trumpet recalls the first phrase of the chorale.

Already a competent player of the piano and the cello at the age of six, Samuel Barber was admitted to the Curtis Institute at fourteen. He was recognised as a composer from his early twenties and won a Pulitzer scholarship in 1935 at the age of twenty-four and, in the following year, the American Academy’s Prix de Rome. The fastidious textures of Barber’s compositions are directly related to the care taken in their preparation and their lyrical style establishes immediate contact with audiences. Among his early works the setting of Arnold’s ‘Dover Beach’ was notable, but it was the slow movement of his string quartet of 1936 that was to bring Barber international fame. The composer’s adaption of it for string orchestra under the title ‘Adagio for Strings’ led to its first performance under the baton of Toscanini and its acceptance by a wide public.

The Adagio reveals Barber’s adherence to European musical tradition and is one of the most lovely inspirations in twentieth-century music. The lovingly drawn tendrils of its melody are exquisitely balanced on luminous harmony creating an effect of poignant beauty that few can resist. The inspiration of Bach in this music has often been noted so it is fitting that, as with so many of the great master’s pieces, the Adagio should be adapted for performance in various ways. Barber made this arrangement of the piece in 1967 and as a setting of the Agnus Dei it fulfills a new and enlightening role.

Even though, before the turn of the century, Charles Ives had produced choral music of singular originality, it was still pertinent of Gilbert Chase, in his book America’s Music, to state: ‘What we really needed was some American music to which no European master of composition could sign his name and get away with it.’ It seems extraordinary that such problems were to be addressed in the 1920’s in France, by a Frenchwoman, Nadia Boulanger. It was to this lady that several generations of American composers were drawn; among them Aaron Copland, Virgil Thomson, Roy Harris, Walter Piston and Elliott Carter. An avowed disciple of Stravinsky, Mlle Boulanger imposed a severly disciplined method of study on her pupils tempered with encouragement always to develop their own musical styles. That she was able to accomplish this establishes her as one of the greatest musical pedagogues in the history of the art.

It was whilst Copland was under the instruction of Nadia Boulanger, in Paris in 1921, that he wrote the Four Motets of which three are included on this record. In his autobiography the composer points out the influence of Mussorgsky evident in these pieces, a composer whose music Copland much admired. These unaccompanied Motets were performed both at Fontainbleu and Paris under Nadia Boulanger’s direction, but the composer agreed to their publication with mixed feelings since he felt that they were written in a style that was not truly his own. No such problems of personal style relate to the concisely written ‘In the Beginning’ of 1947. By this time Copland’s musical personality was clearly defined and this work, which features a mezzo-soprano soloist with unaccompanied mixed chorus, dispels any illusions that Copland’s choral music is inevitably ‘folksy’ in style. Here the composer weaves a web of rhythmic phrases that effectively cohere into longer sentences and the stimulating harmonies reflect his great affection for the early religious music of the USA. These rhythmic patterns and the frequent use of ‘perfect’ intervals give the music its own true identity and help to create an atmosphere which completely transcends the period in which it was written. Copland, the composer of such attractive scores as Billy the Kid and Appalachian Spring, has even had some of his music taken up by ‘pop’ groups, but his wide-ranging output has embraced music that has from time to time been considered very problematical. When, on his return to the USA from Paris, he produced his Symphony for Organ and Orchestra, the conductor, Walter Damrosch, expressed the opinion that: ‘If he can write like that at twenty-three, in five years he’ll be ready to commit murder.’