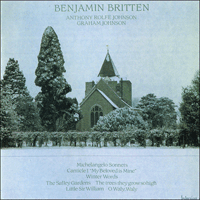 The vocal works recorded here reflect contrasting yet complementary elements of Britten’s creative art. His lifelong interest in folksong is perhaps the most obvious feature, while his debt to Purcell is clearly in evidence in the First Canticle. In the Seven Sonnets of Michelangelo Britten’s musical language is revealed at its most consciously European; in Winter Words it is at its most lyrically English.

The first part is devoted to love songs, both sacred and profane. The Michelangelo Sonnets were completed in America in October 1940 and they were the first songs written specifically for Peter Pears, to whom they are dedicated and, surely, addressed. As Graham Johnson has written in The Britten Companion (Faber): ‘This cycle ranks with Schumann’s Myrthen as a garland of songs to celebrate a marriage of minds and hearts’.

The metaphysical love-sonnets of Michelangelo are rare in their juxtaposition of emotional intensity and closely-worked argument. This tension between the senses and the intellect inspired Britten to some of his finest invention. It was a theme that was to resurface again, towards the end of Britten’s life, in the last major work he wrote for Pears, the opera Death in Venice.

The Seven Sonnets of Michelangelo date from the period of Britten’s self-imposed exile in America during the early years of the Second World War. Freed of ‘national’ artistic restraints, he consciously absorbed diverse European and American styles and techniques into his music. He completed the Rimbaud cycle, Les Illuminations, came to terms with Mahler in the Violin Concerto and the Sinfonia da Requiem, and he exercised his ‘American’ voice in the operetta Paul Bunyan. But of all the works of the period, the brilliantly Italianate Michelangelo Sonnets are undoubtedly the most uncompromising of his European stylizations. The bel canto tradition is here revived and reinterpreted in twentieth-century terms. The vocal line governs the very shape of the songs as never before with Britten, and his melodic gift never fails him.

The cycle is framed by two statuesque songs of high rhetoric. The first asserts that, just as in art there are high, middle and low styles, so in love one evokes what is fitting to oneself – in the poet’s case pain, despair and longing. The song derives its rhythmic impulse from the opening fanfare-like figure in the piano. The final song is an intimation of perfection and the immortality of love. At first piano and voice alternate in broad paragraphs, but gradually they unite in their praise of love. These songs define the tonal scheme of the cycle, beginning in A and ending in D. Though the first song begins and ends in A, its sustained central section is chromatic and transitionary, though it establishes a Lydian C major as a point of departure (that is to say the fourth degree of the scale – F in this case – is sharpened). This C major prepares for the C minor of Sonnet XXI, in which the vulnerability of deep attachment is expressed in gentler, pleading terms.

Sonnet XXX is one of Britten’s very finest songs. Its intimation of things that can only be realised through the presence of the beloved is expressed in a seamless bel canto line over sostenuto chords in the piano. (Again, its G major is inflected by the Lydian sharpened fourth.) The song ends with a yearning, rising ninth for the singer that anticipates Grimes’s haunted cry, “What harbour shelters peace?”. The bitonal tension of Sonnet LV (again G in the voice, Lydian B flat in the piano) gives way to the wistful serenata of Sonnet XXXVIII in which the rejected lover begs for the return of his senses so that he may, in time, love again. The white-note tonality of this ardent serenade is soon swept aside by the ecstatic setting of Sonnet XXXII, its E-C sharp minor constantly undermined by persistent seconds in the piano. E and C sharp eventually yield to the Lydian D major of the final sonnet, ‘Spirto ben nato’.

The Lydian inflection of so much of this music became, thereafter, a constant feature of Britten’s ‘love’ music. To take just two examples from the first and last of Britten’s operas: it is to be found in Grimes’s hut-scene aria, ‘And she will soon forget her schoolhouse ways’, and in the theme associated with Tadzio in Death in Venice.

Britten’s five Canticles were composed across a period of some twenty-five years and each is concerned, to a varying extent, with religious themes. Their extended, multi-sectional form derives from the dramatic songs and Divine Hymns of Purcell, many realizations of which Britten had made before writing his first Canticle, My beloved is mine, in September 1947. It is a setting of a text by Francis Quarles, characteristic of much mystical poetry since The Song of Songs in its quasi-erotic imagery, which is beautifully caught in Britten’s cantata-like setting – a sequence of barcarolle, recitative, scherzo and lento coda. Writing in 1952, Peter Pears was of the opinion that Canticle I was ‘Britten’s finest piece of vocal music to date’ and it still compares well with almost anything he wrote later. Much of its quality derives from the expressive and sometimes highly melismatic freedom of vocal writing.

Britten began arranging folksongs for his wartime recitals with Pears. The first volume was published in 1943 and all of the seven settings in it are dedicated to friends he and Pears had made in America. Down by the Salley Gardens is dedicated to Clytie Hine Mundy, Pears’s singing teacher in the United States. It is an Irish folksong, with words by W B Yeats. Britten’s setting is simple and understated, with the subtlest of harmonic touches conveying the folly of youth with touching pathos.

The other three folksongs are all from Somerset and they share that melancholy, almost desolate quality of some of the Wessex-inspired texts that Britten set in Winter Words. Again, all three settings are understated, though the harmonic palette is fairly opaque at times. ‘The trees they grow so high’ begins and ends unaccompanied, but what little the piano has to do is very telling. The lilt of ‘Little Sir William’ turns very sour in the final stanza, and when ‘love … groweth old’ in ‘O Waly, Waly’ the harmonic shift in the piano is like a stab to the heart.

Thomas Hardy’s many collections of poems date from the later years of his life and perhaps for this reason many of the poems convey a note of regretful stoicism. Britten completed his settings of a selection of Hardy’s lyrics and ballads in September 1953, and the title of the work, Winter Words, is also Hardy’s. Though not strictly speaking a cycle, Winter Words is more than merely a collection of songs. Britten has paid very careful attention to the tonal structure of the sequence and the dramatic rhythm of temporal and textural contrast. The work begins and ends in D, and even within the context of the minor mode of the first song, the major mode of ‘Before Life and After’ is anticipated at the words ‘when no trees, no tall trees grew here’ – presumably ‘before the birth of consciousness’.

Unlike the rich Italianate palette of the Michelangelo Sonnets, the textures of the Hardy songs are spare and economical. They date from a turning-point in Britten’s music which was finally reached in the chamber opera, The Turn of the Screw (1954). The very opening of At day-close in November illustrates this point. Within the eight-bar piano introduction Britten employs all twelve notes of the chromatic scale. In The Turn of the Screw such textures of total chromaticism were further articulated by twelve-note ordering. But this ‘continental’ element is merely a sign of things to come. Most of the songs are strikingly English in tone.

The sequence begins with a nostalgic reflection of the passing of time. The trees Hardy himself planted in his ‘June time’ now ‘obscure the sky’. Midnight on the Great Western is distinguished by the onomatopoeic evocation of the train’s whistle and the constant motion of the carriage. It also reflects the deeply compassionate side of Britten’s nature in its touching picture of the lonely child travelling towards an unknown destination, perhaps even to death? Wagtail and Baby and The Little Old Table are two miniatures of rare perfection. The Choirmaster’s Burial, by contrast, is an extended narrative ballad in which the choirmaster’s favourite hymn-tune, ‘Mount Ephraim’ is twice evoked by Britten. It also includes some of the freest, most melismatic vocal writing in the cycle. Proud Songsters, another miniature, is the most brilliant of the settings. It is followed by another narrative ballad, At the Railway Station, Upway, in which the voice is confined to recitative while the piano reproduces the dry, brittle tones of the violin.

With the final song the sequence comes full circle. Before Life and After is a bitter song of longing for the state of the world before consciousness dawned, when ‘none suffered sickness, love or loss’. Its relentless repeated triads are like the march of Time, the vocal line constantly trying to free itself. The song, indeed the work, ends with the question, ‘How long before nescience is reaffirmed. How long?’. It was a question that troubled Britten till the very end of his life and it was responsible for the musical question-marks we hear at the end of Death in Venice and the Third String Quartet.