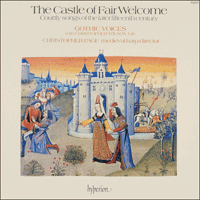 The Castle of Fair Welcome

‘The sound is beautifully carved out, and the ensemble includes some of Britain's finest singers’ (Gramophone)

The castle shimmered between the sheer oaks.
The wall in the water went wondrous deep
then reared up high on its way to the heavens.
The knight saw chalk-white chimneys enough
On the tiles of the towers …
(Anonymous: Sir Gawayn and the Green Knight)

After courteous words with the porter at the gate Sir Gawayn will pass under the portcullis of this castle, ‘shimmering between the sheer oaks’, and then disappear into the maze of a great household. On every side he will find ‘chambers with hearths where charcoal burns’ and courtyards noisy with hurrying chaplains as candles are lit in the galleries.

This recording presents some of the music which could be heard in some royal and noble households during the fifteenth century. Most of the composers represented enjoyed the highest patronage available to a fifteenth-century musician. The Englishman Robert Morton, whose rondeau Le souvenir de vous me tue is one of the most beguiling medieval songs, was a chaplain in the employ of Philip the Good and Charles the Bold, Dukes of Burgundy. (Charles was an accomplished composer in his own right, to judge by Ma dame, trop vous mesprenés). Gilles de Binche, called Binchois, was also one of Philip’s chaplains, and the outstanding composer of the period, Guillaume Dufay, may also have had some connection with the Burgundian court; otherwise his patrons included the Malatesta family at Pesaro and later Duke Amadeus VIII of Savoy.

Within a castle complex, songs and instrumental pieces like those recorded here were often performed in the grande salle, or Great Hall, especially when the main daily meals of disner and souper were elaborated for festivities at Christmas, Easter and Pentecost. As the Hall filled with ‘such a great wealth of knights and ladies that it was wondrous to behold’ there might be young squires waiting to be dubbed or to be presented with prizes for victory in the lists. These ceremonies were graced by music—and sometimes by polyphonic songs to judge by a revealing passage in the fifteenth-century romance of Cleriadus et Meliadice where we find the hero performing a rondeau in a French salle, ‘the best and finest ever built’, during the celebrations after a tournament.

The story is worth telling. Cleriadus, the son of the Count of Asturias, has disguised himself in green and taken the title of ‘Le chevalier vert’; installing himself in a place called ‘La joyeuse maison’ he undertakes to joust with any knight who may challenge him there during a period of thirty days. (Many historical knights of the fifteenth century undertook a pas d’armes of this kind, most notably the Burgundian hero Jacques de Lalaing.) Cleriadus triumphs over all comers to ‘La joyeuse maison’ and a feast is duly held where all the vanquished knights wear a green livery which he presents to them. At one point during the festivities Cleriadus sings a rondeau with words by his lady-love, Meliadice, and polyphonic music by himself:

When the company had danced a long while to the minstrels they began to dance to songs. So Cleriadus began to sing what Meliadice had written. A squire from his retinue held the tenor part for him and you may be sure that it was good to hear, for [Cleriadus] sang better than anyone had ever heard before. When he had finished he put a written copy of the song into the hands of Meliadice.

Like an embroidered hanging, or a wooden dresser arrayed with silver plate, a song like Guillaume Dufay’s Ne je ne dors or Robert Morton’s Plus j’ay le monde regardé would have been an adornment to such a scene as this; the chivalrous ambitions of a young squire could not be better expressed than in these lines set by Morton:

A Great Hall was usually a grandiose building which offered musicians an opportunity to perform en publicque—a conception of musical performance which can be traced as early as the fourteenth century in France. A large, open space with a wooden roof and tiled floor, it was usually embellished with hangings or tapestries; yet a substantial amount of wall-space might remain uncovered and even when the Hall was full of courtiers it probably provided singers with a spacious and resonant acoustic. The same may be said for instrumentalists, especially players of the lute and harp, often combined in the fifteenth century. To judge by contemporary pictures these instruments were sometimes used in the Hall with the musicians standing at floor-level or raised up aloft in a small gallery.

There were other musical venues within the castle—the lord’s chamber, for example. This was a place where the magnate could retire with his immediate entourage for ‘games of draughts, chess and a great wealth of other entertainments’, including music. (For complete privacy he could remove still further to his garde robe, the petite chambrette, and by the fifteenth century we hear of royal persons using this place for playing the harp in solitude.) In the Great Chamber, however, the lord was surrounded by members of his retinue who were expected not only to keep him company but also to entertain him. Duke Charles the Bold of Burgundy, for example, had sixteen escuiers who were required to

sleep near the duke’s chamber as a guard for his person. And when the duke has laboured all day at his duties and given audience to everyone, he retires to his chamber, and the squires go with him to keep him company. Some should sing, some should read romances and other arresting things, some should speak of love and arms and help the prince pass his time in gracious diversions. (Olivier de la Marche: L’Estat de la Maison du Duc Charles de Bourgoingne, dit le Hardy, in H Beaune and J D’Arbaumont, eds., Mémoires d’Olivier de la Marche, 4 vols., Société de l’Histoire de France, iv, p.16)

It was in the chamber that songs like those recorded here took their rightful place in chivalric culture. During the course of an evening in the chamber an escuier might hear songs by Morton or Dufay one moment and passages from romances or ancient histories of Tristan or Julius Caesar the next. Then the conversation might turn to a nice point of tournament protocol. Like blazons painted on a herald’s roll, these things passed before the escuier as he sat in the chamber and each one was enveloped in the same aura of excellence. In these noble and royal milieux the tone and technique of anything written in French, whether for entertainment or for edification, was much the same, and it did not matter if the work in hand were a romance of King Arthur, a treatise on tourneying, or a love-song in rondeau form. All had the ceremonial quality of an official proclamation, the formality of a diplomatic letter and the hyperbole of a scrupulous speech by an ambassador newly arrived at court. The formal and grandiloquent tone of these poems, together with the degree of craftsmanship which the author had brought to his chosen poetic form, usually mattered more than what the words of the poem actually said. Indeed most of the poems recorded here have no more ‘meaning’ to them than the leafy sprays and branches painted in the margins of fifteenth-century manuscripts. Like those gilded flourishes, an amorous rondeau fills a space in a gracious and conventional way. Now and then, however, we encounter a poem whose ambitions go much further: Christine de Pisan’s lament for the death of her husband—Dueil angoisseux—is one of the most moving of all medieval poems.

In musical terms the most striking difference between these later fifteenth-century songs and those by composers active in the early 1400s lies in the harmony. Most medieval polyphonic songs consist of a top part (the cantus) supported by an indispensable lower part (the tenor) and one or two optional parts (the contratenors). During the period 1350–1450 the contratenor usually lay in the same range as the tenor, but the half-century from 1450 to 1500 saw the contratenor sink in pitch until it became a contratenor bassus, lying substantially below the tenor. (In the opening passage of Morton’s Que pourroit plus, for example, six adjacent movements of the tenor and contratenor produce parallel tenths—quite impossible in terms of fourteenth-century styles.) The contratenor bassus may also be heard in Morton’s other songs recorded here, in Vincenet’s La pena sin ser sabida and in Regis’s Puisque ma damme/Je m’en voy. The contratenor bassus had much to offer: it permitted wider chordal spacings than had previously been possible and thus placed new sound-colours at the disposal of musicians. In fourteenth-century music a major or minor triad will usually be in close distribution; wider spacings arise only as occasional and transitory effects. But it is fundamental to the technique of a composer like Robert Morton that triads are often widened to a tenth superimposed upon a fifth (d–a–f´) or, in a way that combines wide spacing with narrow, to a twelfth over a third (d–f–a´), this last being one of the most delicate and characteristic colours of later fifteenth-century song.

They drop the drawbridge and do him great honour;
courteously kneeling on the cold ground to greet him.
Gowned in fine garments he goes forth to the Hall
where a great fire is fiercely aflame on the Hearth.