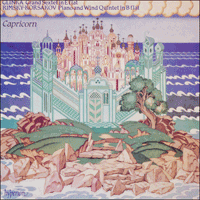 ‘A most striking performance, beautifully modulated, elegantly phrased … very well recorded indeed’ (BBC Record Review)
‘Some of the most joyously delightful music that you will ever hear’ (American Record Guide)
‘Captivating’ (Hi-Fi News)
‘Two delightful rarities’ (The Musical Times)
‘Rimsky’s youthful quintet is a thoroughly diverting piece … like a garrulous but endearing friend whose loquacity is readily borne for the sake of his charm and good nature’ (Penguin Stereo Record Guide)

The forty-four years which separate the two works on this recording witnessed an enormous development in Russian musical life, as the nationalist composers became firmly established and musical activity spread beyond the confines of aristocracy and court to a much wider bourgeois audience. From the reign of Peter the Great (1682–1725) onwards, Russian cultural life was increasingly invaded by Western European ideas; Italian operas were performed in St Petersburg from 1731, with a French company arriving in 1764. Some Russian composers studied in Italy, and towards the end of the century, when Russian folk songs became fashionable, there was some ‘Russianization’ of the conventional Italian idiom with the inclusion of some Russian tunes and stories. By the early nineteenth century St Petersburg was much like any other cosmopolitan European city; Mozart’s Don Giovanni and The Magic Flute were performed in 1797, and there were regular performances of Italian and French operas, especially those by Rossini, Cherubini, Méhul and Boieldieu. The Philharmonic Society was formed in 1802, giving performances of large choral works, including Haydn’s Creation and Seasons, as well as the premiere of Beethoven’s Missa Solemnis in 1824, and amongst musical amateurs of the aristocracy salons with chamber music were common.

With the accession of Alexander II (1855–1881), there were sweeping changes in many aspects of Russian life, notably the emancipation of the serfs in 1861. The Russian Imperial Music Society had been formed two years earlier, in turn founding a Conservatory in 1860 with Tchaikovsky as one of the first pupils. By contrast with the Germanic tradition of this establishment, the Free School of Music, formed in 1862, put greater emphasis on a Russian style, giving regular concerts conducted by Balakirev and Rimsky-Korsakov of Russian works, together with some by those composers most influential on the nationalists, especially Berlioz, Schumann and Liszt. By 1876 Glinka and Dargomïzhsky were dead, and Borodin’s first two symphonies, Balakirev’s Islamey, and Mussorgsky’s Boris Godunov had all been written. Rimsky-Korsakov had an opera and three symphonies to his credit, and the vigorous critic Vladimir Stasov had in 1867 coined the nickname ‘The Mighty Handful’ to describe the five composers to whom he entrusted Russia’s true future musical glory.

Mikhail Ivanovich Glinka: Grand Sextet in E flat major (1832)
Born near Smolensk into the landowning class, Mikhail Ivanovich Glinka was in St Petersburg from 1817 to 1830, save for a visit to the Caucasus. He became a skilled singer and pianist, taking three lessons from John Field and impressing Hummel, whose piano-writing clearly influenced the Grand Sextet. With little formal grounding he wrote several songs and imitated Classical forms in a number of chamber works. In 1830 he travelled to Italy where he met Mendelssohn and Berlioz, Bellini and Donizetti. The last two influenced him strongly and he wrote a number of pot-pourris on themes from their operas to please the numerous ladies with whom he fell in love. He himself describes the circumstances surrounding the composition of the Grand Sextet in his Memoirs of 1854 – he was living near Lake Maggiore (for his continually troublesome health) when he became infatuated with his doctor’s married daughter, a highly cultured and beautiful woman who had entertained Chopin the year before:

I naturally visited de Filippi’s daughter frequently – the similarity of our upbringing and our passion for the same art could not but bring us together. Because of her interest in the piano I began for her a Sestetto Originale, but later on, having finished it in the autumn, I was compelled to dedicate it, not to her, but to a female friend of hers.

You see, I had to cease my frequent visits because they were exciting suspicion and gossip. De Filippi was not a little concerned at this, and in order to put a stop to the unhappy business a bit more smoothly, he purposely took me to see his daughter the last time; we rowed about Lake Maggiore for almost the entire day in rather unpleasant weather, which indeed more or less matched our low spirits.

This was to be one of his last ‘Italian’ works: ‘Longing for home led me, step by step, to think of composing like a Russian.’ The next year he headed north, to Vienna and Berlin, where he pursued his only systematic course of study, before returning to Russia in 1834. Two years later, A Life for the Tsar was performed to a rapturous reception, followed by Ruslan and Lyudmila; together they established a completely new Russian school.

The first movement of the Grand Sextet, Allegro, opens with a bold motto-theme in the piano, setting the tone for its dominant solo role throughout the work. A conventional structure in sonata form follows, with an elegant first subject and a suave second theme which first appears on the cello. The development is simple, but the recapitulation is unusual in that it brings the second theme back in the submediant (C major), a device which recurs in the finale.

The Andante is a delightful serenade in G major with a gypsy interlude on the violin for the middle section. It leads directly into the finale, Allegro con spirito, a vivacious movement, again in sonata form, with three main themes: the first is full of cross-accents and unexpected barring; the second has an unashamedly operatic accompaniment; and the third contains the only true ‘Russian’ touch in the work – an extended melody whose modal basis prevents it from settling in any one key.

Nikolai Rimsky-Korsakov: Quintet in B flat major (1876)
Nikolai Rimsky-Korsakov was the youngest member of ‘The Mighty Handful’, and probably the most competent technically, though his early training was very haphazard; he was in the navy until 1873. The Quintet in B flat major dates from a fallow period in his output, while he was studying counterpoint, something reflected in the few works which he completed at that time. He also wrote memoirs, published as My Musical Life, and he describes the composition of the Quintet:

In 1876 the Russian Musical Society announced a prize contest for a work in chamber music. The desire to write something for this contest seized me … and I took it into my head to write a Quintet for the piano and wind instruments. I composed the Quintet in three movements.

The fate of my Sextet [for strings] and my Quintet was as follows: The jury awarded the prize to Nápravník’s Trio; it found my Sextet worthy of honourable mention, but disregarded my Quintet entirely, along with the works of the other competitors. It was said that Leschetizky had played Nápravník’s Trio beautifully at sight for the jury, whereas my Quintet had fallen into the hands of Cross, a mediocre sight-reader who had made such a fiasco of it that the work was not even heard to the end. Had my Quintet been fortunate in the performer, it would surely have attracted the jury’s attention. Its fiasco at the competition was undeserved, nevertheless, for it pleased the audience greatly when Y Goldstein played it subsequently at a concert of the St Petersburg Chamber Music Society.

Rimsky-Korsakov tells us that the first movement is ‘in the classic style of Beethoven’. Its two themes are well contrasted – a lively melody begun by the bassoon, and a hymn-like tune for the wind instruments alone. Development, as in the Glinka, tends to consist of passages repeated in different keys.

The Andante is in the home key of B flat, and its opening horn melody adopts the typically Russian technique of repeating its phrases against a different harmonic background. When the clarinet develops a longer phrase in the minor, this in turn is repeated another four times to a series of luscious accompaniments. There is a ‘fairly good fugato for the wind instruments’, and the movement ends with the return of the first section.

The final Rondo is based on a catchy tune with a hopping bassoon accompaniment. This time the piano gets a fugato on its own, and before the third appearance of the theme each instrument except the bassoon has a cadenza, ‘according to the character of each instrument’.