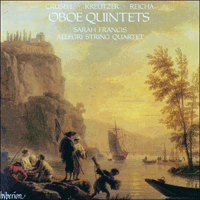 Of the three composers whose music is represented on this disc, all active at the turn of the nineteenth century, the name of only one will, probably, be familiar to the majority of listeners, and even that by proxy: Rodolphe Kreutzer is known to every violin student as the dedicatee of Beethoven’s A major Violin Sonata, Op 47, and the author of the 42 études ou caprices. Reicha’s is a name well-known to music historians but, though prolific, famous and successful as a composer in his day, since his death in 1836 his musical works have been neglected; it is as a theorist that he has been remembered. Crusell is, to some extent, the clarinettist’s Kreutzer, and his concertos and other works for the instrument have now assumed pedagogical value, seldom finding their way into the concert hall.

The marriage of solo wind instrument to string trio or quartet has generally been a felicitous one. If, by the end of the eighteenth century, the string quartet had evolved into a medium into which a composer could pour his deepest thoughts, the addition of flute, oboe or clarinet generally brought reminders of the old-fashioned serenade or divertimento; music primarily intended to entertain (though the best-known example of the genre, Mozart’s Clarinet Quintet, undoubtedly ranks with his finest music). Crusell’s Oboe Quintet, Op 9, is indeed called a ‘Divertimento’.

Bernhard Henrik Crusell: Divertimento in C major Op 9
Born into a family of Finnish bookbinders on 15 October 1775 in Nystad, Bernhard Henrik Crusell’s musical ability was quick to manifest itself, though it was not encouraged by his parents. Nevertheless, he became apprenticed to a military band at the age of thirteen (he had taken up the clarinet at the age of four) at Sveaborg, which transferred to Stockholm in 1791. It was as a clarinettist that Crusell was to make his name, studying with Franz Tausch in Berlin and later with Jean Xavier Lefèvre in Paris.

Whilst in Stockholm Crusell studied music theory with Abbé Georg Joseph Vogler (one of the more colourful and controversial of the many theorists working at the end of the eighteenth century), Kapellmeister and tutor to Gustav III since 1786, but it was only at the turn of the century that he himself began composing seriously. As a measure of his success, many of his works were published by Peters in Leipzig; he was the first Finnish composer whose music appeared in print. Vogler, who had been enjoined to found a national music school in Stockholm, must have been pleased.

On paper the overall plan of the C major Divertimento is conventional enough, but the structure is in fact entirely novel. As a wind player himself, Crusell treats the oboe very much as a soloist and many of the gestures derive from the concerto and operatic aria. The first Allegro proceeds very much as a normal sonata-form movement would (the very flexible approach to modulation may well have been learned from Vogler), but the spirited codetta, which gives the oboist the opportunity to show off some high notes, leads not into the expected development section but into a cadenza for the oboe which in turns leads directly into the slow movement. (This practice of truncating the first movement found some favour in the nineteenth century, the best known example being Max Bruch’s G minor Violin Concerto.) The C minor Andante poco adagio is a movement whose gravity is tempered by some smiling turns towards the major mode. Towards its close the mood becomes more fervent, but this is dispelled by the ensuing Allegro, which again follows without a break and is itself little more than a fairly extended introduction to the Allegro vivace finale proper.

Rodolphe Kreutzer: Grand Quintet in C major
Rodolph Kreutzer was born in Versailles in 1766 and became one of the most famous and influential violinists of his day. Like most contemporary musicians he was equally active as a composer, producing no fewer than nineteen violin concertos as well as a good deal of music for the stage – ballets, operas and opéras-comiques. Most of his chamber music dates from the 1790s. The exact date of the Oboe Quintet – the solo wind part may also be taken by the clarinet – is not known, but the work is presumed to have been written between 1790 and 1799. It is a relatively short piece, despite being labelled ‘Grand Quintet’. As in the Crusell there is a surprise in the first movement: in place of the development is an Andantino section, prefaced by a hymn-like passage for the strings. The slow movement itself, in F major, is long-lined, very vocal in style, with a recurring dotted rhythm (redolent of the first movement of Beethoven’s ‘Moonlight’ Sonata) and an affecting use of the Neapolitan. The music’s vocal quality is furthered by a recitative section, an operatic dialogue between oboe and first violin, before the short finale, a perky Presto non troppo.

Antoine Reicha: Quintet in F major Op 107
Compared with these, Antoine Reicha’s F major Quintet is conventional, though his craftsmanship is not to be gainsaid. Antoine Reicha (as he became; he was born Antonín, or Anton, Rejcha in Prague on 26 February 1770) was one of the leading pedagogues of the late-eighteenth and early-nineteenth centuries. Among his more illustrious pupils were Berlioz, Liszt, and, briefly in the last year of his life, César Franck. In his youth he knew Beethoven and C G Neefe (his adoptive family moved to Bonn in 1785 where Anton played flute and violin in the Hofkapelle) and also Haydn. After a few unsuccessful years in Paris, 1801 found him in Vienna where he took lessons from Albrechtsberger (from whom, like Beethoven, he probably gained his mastery of contrapuntal techniques) and Salieri. In 1808 he returned to Paris, dreaming of operatic success. Though this was not forthcoming, as a composer of chamber music his fame continued to grow: he produced no fewer than four sets of wind quintets. Such was his reputation that he was appointed professor of counterpoint and fugue at the Conservatoire in 1818 and it was around this time that his Cours de composition musicale was published. The famous Traité de haute composition musicale, his most important treatise, followed between 1824 and 1826. This work provoked much controversy and within a few years had been translated into English, Italian and Spanish.

The F major Quintet, Op 107, dates from the Paris years, being written probably between 1821 and 1826 and published in Paris in 1829 in a version for clarinet and strings in G major. Reicha had said of his six quartets for flute and strings, Op 98, that they were true quartets rather than sonatas or solos for flute with string accompaniment, and the same holds good for the Quintet. The first movement demonstrates Reicha’s mastery of sonata form; the delaying of any extensive reference to the minor mode until the development section is reached is particularly effective. The B flat major Andante has a definite archaic feel to its with its dotted Sicilian rhythms, and the melting coda sounds as though the composer had the equivalent point in the Larghetto of Mozart’s Clarinet Quintet in mind; but Reicha’s originality is manifest in the Minuet and finale which both show his propensity for asymmetric phrases (something Berlioz was to imitate). The lightweight nature of the finale is agreeably offset by an elaborate fugato section in the middle, and the return of the main theme is delayed as long as possible finally reappearing after a mock cadenza.