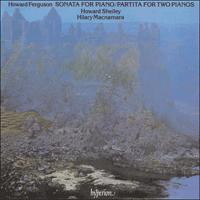 Throughout his career, Howard Ferguson has been blessed with distinguished interpreters of his music: Myra Hess, Harold Samuel, Jascha Heifetz, and Kathleen Ferrier, for instance, whose devotion to it bears witness to its quality. And although composition forms the backbone of his work, Ferguson has made similar distinctive contributions to British musical life as a performer, teacher, and musicologist.

He was born in Belfast in 1908. As a thirteen-year-old he was heard playing at the Belfast Musical Competitions by Harold Samuel who persuaded his parents to let the boy come to London to study with him. Later, on entering the Royal College of Music, he worked at composition with R O Morris and conducting with Malcolm Sargent while continuing to study privately with Samuel. On leaving the RCM he divided his time between composition and playing chamber music, and began to be known as a composer with the publication of his Violin Sonata No 1, op 1 (1931) and his Octet, op 4 (1933). During World War II he was associated with Myra Hess in organizing the daily chamber music concerts at the National Gallery; in those years too he formed long-lasting duo partnerships with Denis Matthews and Yfrah Neaman. From 1948 to 1963 he taught composition at the Royal Academy of Music where his pupils included Richard Rodney Bennett, Susan Bradshaw and Cornelius Cardew.

By the early 1960s Ferguson felt that he had said all he had to say as a composer and made the courageous decision to stop writing. Since then he has devoted himself to musicology, producing among other things scholarly editions of early keyboard music and the complete piano works of Schubert.

Ferguson's personal idiom was present from his earliest works and may be described as twentieth-century Romantic. All his works are underpinned by a firm Classical structure, both formally and harmonically. In general, the thematic material is derived from small groups of notes and, within movements, ideas are closely knit. Frequently, a theme heard at the beginning of the work acts as a motto that returns to give a cyclic quality to the whole.

This practice is well exemplified by the Piano Sonata, a work of tragic grandeur, which consolidated Ferguson's reputation at the beginning of the 1940s. Dedicated to the memory of his friend and mentor Harold Samuel, it is arguably his most personal statement. A stark Lento introduction with sombre dotted rhythms sets the mood and originates much of the material. At the core of the Sonata is the tension arising from the semitonal relationship of the opening notes D flat—C natural; from it derives the all-pervading dissonance of a major seventh followed by a minor ninth heard initially in the underlying harmony. So far the tonality is obscure; the introduction closes on C, the dominant of the home key which is firmly established in the first subject of the troubled, chromatic 'Allegro inquieto' which follows.

During the extension of the first subject an anacrusic rhythmic figure of three quavers emerges to become a prominent thematic factor in the movement as a whole; for instance, it is incorporated within the second subject (Poco meno mosso) and appears extensively in the development. The development itself begins mysteriously, as over a rumbling quaver movement in the bass the first theme is heard dolente in augmented rhythm. A truncated recapitulation leads to a long coda where the bass quaver figure of the development returns, but this time in combination with ideas from the introduction. The music dies down to end on a semitone fall from G flat to the tonic F; it is not a resolution, however, but a question mark.

In contrast to the turbulence of the Allegro, the `Poco adagio' is the still centre of the work and is characterised by a serene diatonic theme in D flat major in its outer sections.

In the centre however (Poco più animato) the shadows return with a theme which alludes to ideas from the introduction; yet this same theme is translated to entirely different effect in the coda where it becomes music of benediction and tranquil acceptance. Furthermore this transformation has an emotional significance since it is the only moment in the Sonata where the introductory ideas are not associated with stress.

The harmonic link between the slow movement and finale outlines again the touchstone of the Sonata's dynamism, that semitonal fall from D flat to C which is heard in the bass at the end of the former and the beginning of the latter respectively. As with the first movement, the Finale (Allegro non troppo) follows a traditional sonata format. Despite its minor tonality the principal theme is resolute in mood, and combined with its bounding 6/8 rhythms brings a new sense of purpose to the music.

Soon after, the theme is inverted and remains in this guise for the rest of the work. The second subject (Molto cantabile) again makes much play with an anacrusic rhythm; it leads to the development which is primarily concerned with the inverted first theme and reaches its climax with the rhythm of the theme alone being pounded out in the bass, pesante and fortissimo. From the 'L'istesso tempo' which follows with its overt reference to the central section of the Adagio, and ipso facto the opening Lento, the music gradually reassumes its mantle of grief which the recapitulation is unable to contain.

During the coda (Allegro molto, ma non presto) fragments from the introduction are heard amidst rushing pianissimo quavers; they rise to a climax when, with crushing intensity, the desolate motto theme and the elegiac processional of the dotted rhythms return. The Sonata ends tersely; the searing semitonal clash is juxtaposed, F crashes in the bass.

As its name implies, Ferguson's Partita is a collection of movements whose characteristics arise from the Baroque suite of dances to which he has added the dimension of Classical symphonic form, and the rich textures of late-Romantic piano writing. Thus the first movement combines the pattern of the French overture 'a slow introduction and conclusion framing a fast section' with sonata form which is the basis of the Allegro. The opening is cast in the dominant of the overall key of the Partita, F sharp major; its marking, 'Grave', and dotted rhythms allude to its Baroque predecessors. A purposeful, oscillating theme in 7/8, punctuated by acciaccature provides the main idea of the 'Allegretto pesante'; tonally, it is ambiguous with its shifting major and minor third. The contrasting subject is a falling cantabile phrase which during the course of the movement is combined with the main theme.

Symphonically, the second movement in B minor fills the function of a scherzo and in Baroque terms it is the French courante. During it, Ferguson exploits the rhythmic ambiguity of the dance with its six beats in a bar which may be divided into either three groups of two or two groups of three. The indication 'Allegro un poco agitato' gives the clue to the mood of the music which is frequently restless, and as in the Piano Sonata the fall of a semitone plays a significant role here. The contrasting theme, a wistful little melody in 6/4 accompanied by a pedal point, forms the basis of the coda and brings the movement to a hushed but uneasy close.

The slow movement (Andante un poco mosso) is a stately sarabande in the key of B, whose ceremonial gait is threaded by a pervasive mordent. During the middle section the music ascends in register; amidst transparent texture, the sarabande melody is accompanied pianissimo by the mordent decoration and trills to create a passage of delicate beauty.

Following Bach's precepts in some of his Partitas, Ferguson does not adopt a particular dance form for the Finale although he suggests that `hints of a reel may often be lurking around the corner'. From its puckish, scherzando beginnings a sonata-rondo movement evolves in a mood of boisterous good humour. In the central episode the tempo slackens to 'Più lento' and at first the music seems set on a development of the opening idea; however, this is cunningly transformed into an echo of the second movement theme, then extended and intensified into a poignant phrase, dolente and cantabile. But this darker mood does not prevail; the high spirits return and as F sharp major is firmly reached the momentum gathers and plunges headlong to an exhilarating conclusion.