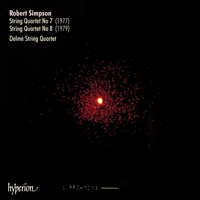 ‘A valuable and rewarding issue’ (BBC Record Review)
‘Magnificent playing and fine recording’ (The Sunday Times)
‘Some of the finest music by a composer whose neglect has been almost criminal … the two quartets here must surely number among his most profound works, and indeed could hold their own against virtually any written in a century which has witnessed so many masterly contributions to the genre. The Delmé play like men committed to the validity of every note … with such a profound sense of inwardness and inevitability that one can only marvel’ (Hi-Fi News)

This recording contains two great string quartets by a master of the genre, Robert Simpson (1921–1997). Simpson always had a particular devotion to this medium and once remarked that if he were condemned to write only one kind of music he would choose the string quartet. Like those of two predecessors, Beethoven and Bartók, Simpson’s quartets spanned his whole composing life. He wrote fifteen. Not only do they contain music of an attractive and exciting kind, but they also illustrate this composer’s abiding interest in organic development and the problems of organizing large musical structures. Increasingly, too, they reflect his fascination with musical motion and with energy. In particular, the seventh and eighth quartets illustrate Simpson’s interest in the possibilities of everyday musical sounds when approached as if one had never heard them before. We have here two powerful masterworks which must surely take their place in the quartet literature of the second half of the twentieth century as did those of Bartók in the literature of the first.

Both of these quartets have connections with distinguished scientists. No 7 commemorates the astronomer and mathematician, the late Sir James Jeans; and No 8 is dedicated to the entomologist David Gillett, an authority on the mosquito, and to his wife Irena.

String Quartet No 7 was written in 1977 at the request of Lady Jeans (Susi Jeans, the organist), and it is dedicated to her. The work was completed quickly and was first played by the Gabrieli String Quartet at a concert in Lady Jeans’ home, Cleveland Lodge, Dorking, during a concert celebrating the centenary of her husband. The composer, himself a keen astronomer and a Fellow of the Royal Astronomical Society, draws parallels between the music of this work and aspects of the universe—quiet and mysterious and yet pulsating with energy. There is only one movement, which falls into three distinct sections, slow–fast–slow. At the beginning of the work the first violin introduces a stationary line on the note D which is crossed by an upward moving one: from this material all the remainder of the piece grows quite logically. At first the vastnesses of space are invoked: progress is occasionally held in check by the sustained bottom note of the cello—a readily identifiable and memorable sound of which Robert Simpson is very fond. Indeed, the various open strings of all four instruments, tuned in fifths, play an important role in the quartet and provide a force which one might compare to gravitation, controlling the movement of the stars in space. The music may seem to move slowly in various directions but it always remains under this tonal-gravitational control; this circle of fifths has different effects according to the way we seem to be facing. The energy of the universe is suggested in the central fast section which contains a tremendous climax of an intensity rare in string quartet literature. The slow music returns to end the work as it began, with the note D, contemplating immensities.

String Quartet No 8, commissioned by Brunel Philharmonic Society with funds made available from the Greater London Arts Association, was written in 1979 and first performed on 21 June 1980 by the Delmé String Quartet at Brunel University where Professor Gillett directed Biological Sciences. The diminutive scherzo of this quartet gives an impression of the ‘formidable delicacy’ (the composer’s words) of a mosquito, and its subtitle, ‘Eretmapodites gilletti’, refers to the species named after its discoverer, the dedicatee of the work.

There are four movements, each of which is in some way unconventional. The first is a large, slow fugue whose intensity is mitigated at times by more reflective material: the fugue subject is a great span of melody that crosses all the strings of each of the instruments in turn and embodies the elements from which the rest of the music grows. But the subject is itself continually changed and transformed, gaining all the while in power and energy. At the climax of the fugue the scurrying motion of the viola and cello, and the inexorable increase in latent momentum which has been gradually built up, are such that the two violins are suddenly left with a steady chiming passage, which then fades into the distance. It is as if a band of campanologists has worked up such power, speed and propulsion in their ringing that they can leave the bells to continue sounding alone under the motion generated.

The second movement illustrates the mosquito in a little Scherzo of A–B–A form. Professor Gillett, on being asked whether the music of this piece is what the insects sound like, replied, ‘No—but it’s what they behave like’, and he indicated that D H Lawrence’s little poem ‘The mosquito knows’ is also an accurate account of the insect:

The mosquito knows full well, small as he is
he’s a beast of prey.
But after all
he only takes his bellyful;
he doesn’t put my blood in the bank.

The third movement is for muted strings and is all elusive half-shades. It is cast in very small-scale sonata form. The finale—whose size balances that of the opening fugue—is a highly original movment, being for part of its length a variation of the first movement, but without the fugal texture. It is tumultuous, yet deliberate, and the tempo is not fast. Pungency rather than speed creates the intense feeling of activity. In the first movement the calmer, more reserved music eventually prevailed; but in the finale it is the sense of concentrated energy that ultimately triumphs, with scales of all kinds evolving from the texture and becoming dominant.

Superlatives of all kinds are frequently overused, but no one need have any hesitation in describing these two Quartets as masterpieces.