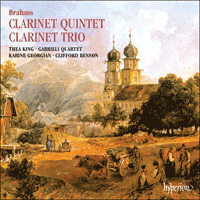 Cover artwork: Admont, 1837, in the Steiermark province of Austria.
From a painting by Franz Barbaribi / Reproduced by courtesy of The Austrian Institute, London

‘Most tender, elegiac performances’ (BBC Record Review)
‘A radiantly beautiful performance, as fine as any put on record’ (The Penguin Guide to Compact Discs)
‘This performance is something special’ (Classic CD)
‘Ravishing sound’ (The Monthly Guide to Recorded Music)
‘A generous coupling. First class’ (Artful Reporter)

Why do so many masterpieces end with variations? On the face of it, variation form is static, with its continual covering of the same trace. Richard Mühlfeld, the clarinettist who inspired Brahms’s Quintet and to whom it was dedicated in 1891, could well have wondered if a variation-finale would be designed to show off his skill in decorative virtuosity. Knowing his Brahms, however, and knowing the Mozart Quintet, he could not have entertained this ‘hope’ for long. The static nature of variation can, of course, generate very deliberate, large motion—the grand procession from one variation to another, or from one group to another, to create an edifice dramatically striking in itself, rather than developing the internal active drama of sonata movement. In a work where the earlier movements display sonata-type activity, an antithesis of this kind may in some circumstances help to canalize all the previous energies.

Variations are more likely to succeed in this than, say, fugue, which is argumentatively static and therefore not easily made apt to a process hitherto based on muscular dramatic action; a fugue may very well serve to expand on the slow momentum generated by a set of variations (as towards the end of the ‘Diabelli’ Variations) or it may wonderfully create a plane of contemplative thought from which action is to grow (as in Beethoven’s C sharp minor Quartet), but its appearance following a long period of dramatic activity will, unless a drastic stroke of genius is invoked (as in Beethoven’s late B flat Quartet, Op 130, with its original finale, the Grosse Fuge), likely produce an unfortunate situation as if the builders of a house had suddenly ceased work to argue the point. With variations as finale we get the sense that these builders have almost finished the structure and are moving around it in a series of viewpoints (offered by a number of variations on a theme) so as to know how to complete the work.

Variations may begin the whole work on a quiet plane, or they may provide a period of repose among more active elements. As finale, a set of variations is liable to be pressed into a wider variety of uses. Essentially it may be a high plateau, reached after a climb or a variegated journey; or we might at length find ourselves strolling in gentle country after breathless adventures; or we may in the end be staring at something at once active and static, fulminating majestically like a volcano or the finale of Brahms’s fourth symphony. In all such cases, calm or blazing, the variation-finale is a last steadying or canalizing of the work’s energies. In Brahms’s Clarinet Quintet the variation-finale distils the substances of the elegiac work in various ways, and we end with the impression of something ineradicable. When the first movement theme comes back at the end, a circle seems to have been completed.

The broad, spacious, richly eventful first movement is Brahms’s last very large sonata structure; the remaining two that followed (the clarinet sonatas, also for Mühlfeld) are on a smaller scale, and Brahms thereafter concentrated on small forms of great density. In this nobly expansive quintet the clarinet is nowhere treated as a soloist, except where its sound is essential to the aural canvas; this is a real quintet throughout.

The principle of equality applies in all the movements, and the only place where the clarinet is given free rein is in the centre of the otherwise rapt Adagio, where the intense ruminative beauty is abruptly broken into by wildly evocative clarinet flourishes reminiscent of the gipsy music Brahms loved so much.

The underlying melancholy of much of the Quintet is relieved by the gentle third movement, where contrasting tempi are merged or superimposed in a way recalling the corresponding movement in the second symphony. Its quiet close sensitively makes way in mood (and rhythm) for the theme of the great variation-finale.

Brahms seems to have thought more of the Clarinet Trio than the Clarinet Quintet, though the latter has assuredly achieved the greater popularity. One wonders what the clarinettist Richard Mühfeld thought—the dedicatee of no fewer than four deathless works, all in Brahms’s ripest late vein: the two Sonatas, the Trio and the Quintet.

The Trio and Quintet were both written in the summer of 1891, and the Trio is the knottier and more elliptical of the two; it is intensely compact and its first movement’s reserve partially hides the fact that it is one of the most disturbed pieces Brahms ever wrote. Minor keys are over­whelmingly predominant. The broadly flowing A minor main theme suggests a calm elegy of a kind common in this composer; but convulsive, contracting agitation soon sets in, and when the second group seems to begin quietly in an apparent C major with another broad tune, the disruptive elements appear about to be exorcized. But the C major is not real, and soon becomes a restless E minor. The whole of the development is equally fitful and devoted to minor keys; it is invaded by ghostly scales which become more tangibly aggressive as the recapitulation approaches. Here we expect the quiet but gloomy opening theme but instead are flung into its stormy continuation. As before, the second group starts in a deceptive major key (F) which turns to a tonic A minor. In the coda A major surprisingly brightens the scene, but a few ominous bars (poco meno allegro) make the final A major (with a return of the spectral scales) disturbingly mysterious.

The D major Adagio springs from the A major chord at the end of the previous piece, and it is a continuous flow of organic melody. The warm flow of its sonata form is determined rather than peaceful and the long paragraphs of both its main melodies are formed in segments—this creates a certain restlessness not inapt after the first movement.

The third movement is one of Brahms’s characteristic moderately paced scherzos, now in plain A major (again arising naturally from the previous D major); it is still harmonically fitful in places, and settles most happily in the very attractive rippling D major trio. A little coda (un poco sostenuto) brings this soothing movement to a soft close in A major.

With the finale we return to an uncomprising A minor, and a combination of 6/8 and 2/4 time, enhancing a sense of agitation. But the whole is powerfully controlled. This time the second groups make no feints at major keys—everything is dominated by minor tonalities. The movement is on a smaller scale than the first, but balances it by means of its unidirectional determination. The minor persists bracingly to the end.

Cover artwork: Admont, 1837, in the Steiermark province of Austria.
From a painting by Franz Barbaribi / Reproduced by courtesy of The Austrian Institute, London