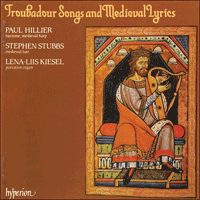 Music and poetry are everywhere combined in the art of song; in primitive cultures the two are rarely found apart. The function of song simply as entertainment, however varied the emotions and situations it expresses, can only be seen as an impoverishment of its role in pre-literate societies. Song for primitive man could wear a public or a private face; appropriate songs would accompany many different aspects of his life; indeed, the role they played was often vital. Underlying this was the magic potency of the word, whether sung to oneself, declaimed to others, or chanted together in rituals. Something of this deeply integrated expression survives, even as society evolves into a mixture such as our present technological and self-conscious environment. It is found lingering in folksong, emerges in what we loosely call 'popular' music and, with the rediscovery of early music, can be surprised lurking in the Middle Ages like a unicorn at the edge of a forest.

The 'wandering minstrel' image fashioned by the nineteenth century for the troubadours of operetta has sadly diluted our presentation and understanding of medieval song. We should be careful, though, not to criticise too carelessly. In the decades preceding the First World War, a way to the troubadours was found via Dante, and a flurry of scholarship produced dictionaries, anthologies, translations and a lively interest from Ezra Pound, one of our century's seminal poets. This declined with the war and only now are many of these early recoveries of troubadour culture being superceded by new scholarship.

The medieval lyric in general has been popularised in such anthologies as Helen Waddell's Medieval Latin Lyrics. For the most part, the earliest surviving medieval lyrics have a distinctly religious character shaped by the tradition of Latin hymnody, and even the few surviving examples in vernacular tongues are religious in tone. Latin was the common language of educated men in christianised Europe and remained the major poetic tongue into the twelfth century. In the Sequence a large-scale form was established (notably by Notker in the ninth century) which is composed traditionally of paired lines of verse sung to the same melody, with a new melody for each new pair. (Both the Planctus and the Wedding Song on this record are in sequence-derived forms.)

Guiraut de Borneil came from the Limousin, from the country of Excideuil, from the powerful castle of the Viscount of Limoges. He was a man of lowly background, but possessed of a natural intelligence and wit. He was a better troubadour than any that had existed before him, or who existed after him; and he was called the Master of the Troubadours. And thus he is still recognised by those who understand subtle verse cleverly interwoven with love and wit. He was highly thought of by nobles and connoisseurs, and by ladies who listened to the excellent words of his songs. His life was such that all winter he stayed at school and taught letters, and all summer he travelled and took with him two singers to sing his songs. He never sought a wife, and all that he earned he gave to his poor parents and to the church in the village where he was born, which was called St Gervais.

Bernart de Ventadorn was from the Limousin, from the castle of Ventadorn. He was poor by birth, the son of a servant who fired the ovens for baking the castle's bread. And he became handsome and clever and knew well how to sing and make songs, and became courteous and wise. His Lord, the Viscount, liked him and did him great honour. The Viscount had a wife, young, noble and joyful; she liked Bernart and his songs, and fell in love with him and he with her; and he made songs and verses for her, about the love he had for her and her worthiness. Their love lasted a long time before anyone noticed. But when the Viscount noticed, he separated Bernart from her, and his wife was locked up and guarded. She was made to advise Bernart to leave and go far away. And he left and went to the Duchess of Normandy — Eleanor of Aquitaine — who was young and of great valour, and who understood merit and words of praise. The songs of Bernart pleased her well, and she received him and welcomed him warmly. For a long time he stayed at her court, and he was enamoured of her and she of him, and he made many fine songs about her. And while he was there, King Henry of England took her as his wife and made her leave and accompany him to England. Bernart remained behind, sad and grieving, and went to the noble Count Raimon of Toulouse, and stayed with him until the Count's death. Then Bernart, with grief, entered the order of Dalon and there ended his days.

Compared with other European countries, the quantity of English medieval song that has survived is small indeed. While it would be wrong to draw too many conclusions from the material we have, several traits can be discerned which later, more abundant centuries (the fifteenth for example) encourage us to regard as characteristically English. One is an awareness of nature as both a physical and a spiritual force; another is a moralising and severe attitude in which the harshness of life acts as a constant reminder of our frail mortality. This particularly is the tone of Worldës Blis, a thirteenth-century song from the London area, clearly modelled on plainsong hymnody and sung accordingly in a free, fairly equal rhythm that allows for the natural stress of the language without impeding the partially melismatic flow of the melody.

The question of rhythm brings us to the overlying problem which every performer of music from this period must face (and to which he must perforce find an answer, however temporary). We do not know how this music was performed. We do not really know very much about the use of instruments, the manner of voice production, or above all about the rhythm. For all too long, scholars sought to establish regular, rhythmicised patterns which they imposed, particularly, on the troubadour songs. More recent scholarship has freed us considerably so that a more variable and declamatory approach to rhythm is encouraged. The beauty of this is that the performer can deliver the poetry as poetic recitation, while yet allowing the melody its full expressive scope.

Where a melody suggests or seems to require a degree of metric regularity or accompaniment, this can easily be provided without any stylistic hiccough. This loose-limbed approach is still open to criticism from those seeking a neatly categorised formula; but this is to forget that medieval song shows strong kinship with certain non-western song traditions (the African griot for example) in which much the same blend of qualities can be found. Personal involvement in these songs must therefore begin as if in the middle of the composition process; and this is wholly desirable when we remember that we are attempting to revive an oral culture with only scant written evidence to go on. The troubadour songs have been transmitted to us almost by chance. As the tradition was dying the songs were noted down — in a notation by now adapted to polyphony and modal rhythm, hence the confusion about rhythm in the songs. At the same time these later (thirteenth-century) writers also provided 'vidas', short biographical sketches of the troubadours. Although these are often unreliable in the strictest factual sense, they are presented below (in translation) as part of the material which has survived the centuries, and as part of the legend which these writers sought to preserve in committing to manuscript the words and melodies of an all but vanished art.

By 1100 northern France had become the intellectual hub of Europe, and in Paris it is the name of Peter Abelard that sounds loudest in our ears.

Abelard tells the story of his early life and of his love affair with Heloïse and its disastrous outcome in his Historia Calamitatum. As a famous philosopher in the schools of Paris, he was engaged as private tutor to the young Heloïse by Fulbert, her uncle. They fell deeply in love and sated their passion at length. When Fulbert learned of this he was outraged and had Abelard seized and castrated. Abelard and Heloïse then found separate refuge in the church, and Abelard established a hermitage, known as the Paraclete, which he later gave to Heloïse and her nuns. Their later correspondence, as between Abbot and Abbess, is justly famous and completes the picture begun in the Historia. In her first letter Heloïse pays tribute to Abelard's prowess as a poet. We learn that his gifts for composing verse and song would charm the heart of any women and that his many love songs were widely popular. None of these secular songs has survived, but with the latter religious period of his life when he composed hymns and six planctus, or 'laments', posterity is luckier.

As poet and musician Abelard needs no legend of calamity or fame as philosopher to warrant our attention. His planctus are original in conception and, while drawing on strictly biblical sources, create very personal and, no doubt in the twelfth century, very contemporary renderings of familiar themes of suffering. Only the last of these six, the Planctus David, has survived with musical notation that can be transcribed with confidence as to the exact pitch; in its closing lines the reference to the weary throat and hand of the harpist/singer is particularly suggestive of the Breton lai tradition with which Abelard, son of a minor Breton noble, must have been acquainted.

Lyric was not confined to the southern portion of Europe; indeed it is the gradual mingling of Romance and Germanic traditions that form the history of medieval song. Several vivid evocations of the minstrel's art can be found in the writings of the modern Orkney poet and novelist, George Mackay Brown. In his northern islands the Scandinavian influence can still be felt, and in the Middle Ages this connection was far stronger. While in Bergen for the 1982 festival, I came across a facsimile of the Wedding Song at the Haakonshallen — a medieval banqueting hall now restored and used for concerts. A specific wedding occasioned this congratulatory sequence and the wedding feast may well have taken place in the Haakonshallen, erected by Haakon between 1247 and 1261. In 1281, Margaret, daughter of King Alexander III of Scotland, sailed to Bergen where she was married to King Eirik Magnusson and crowned Queen of Norway in the cathedral. Only two years later she died. Her surviving daughter, also Margaret, later travelled in the opposite direction to be received as heiress to the Scottish throne, but died in Orkney in 1290. The Wedding Song, possibly written in the Orkneys, is now kept in the University Library, Uppsala.