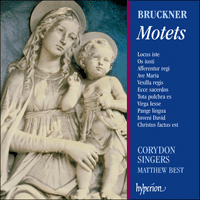 ‘A superb record. Exploring these pieces is a moving experience when the performances are as superlative as these. Very strongly recommended. Record of the Month’ (The Monthly Guide to Recorded Music)

Bruckner’s music for the Roman Catholic liturgy is amongst the finest of the last 150 years. He had a profound faith in the doctrines of the Church and a persistent belief in his own abilities as a composer, even though in other respects he was painfully insecure and indecisive. The motets span nearly the whole of his mature compositional career and reflect clearly the melding of a polyphonic technique, derived from the Renaissance masters, with his own urgent chromaticism. In the May of 1861, Bruckner made his concert debut in the joint role of composer and conductor with his seven-part setting of the Ave Maria which marked the beginning of this compositional maturity. He was thirty-six and had, only the month before, completed five years of exacting contrapuntal study (undertaken partly by post) with one of the leading teachers in Vienna, Simon Sechter. He had already set the same text in 1856 on leaving the great Baroque monastery of St Florian (south-east of Linz), to which he had been admitted as a choirboy on the death of his father, and where he had later spent ten years as an assistant teacher and deputy organist. He had subsequently become organist at the Cathedral and Pfarrkirche in Linz and, at the end of 1860, conductor of the choral society there, the Liedertafel ‘Frohsinn’.

Towards the end of 1861 he applied for the conductorship of the Dommusikverein und Mozarteum in Salzburg, having resigned that of the Liedertafel over a trifling incident, but was to suffer one of the long line of rejections that bedevilled his career. His Fugue in D minor and the Offertory Afferentur regi, composed soon after this, show no sign of his disappointment, illustrating his ability to isolate the tribulations of his life from the emotional meaning of his compositions.

In 1867 he began work on the F minor Mass, shortly after his three month stay in a sanatorium at Bad Kreuzen, following a breakdown. It was completed in 1868, together with the hymn Pange lingua and the Offertory Inveni David. This year also saw his re-appointment as conductor of the Liedertafel and his acceptance of the professorship in harmony and counterpoint at the Vienna Conservatorium, following the death of his teacher, Sechter.

To celebrate the dedication of the votive chapel of the new Linz cathedral, the first performance of Bruckner’s Gradual, Locus iste, was given in 1869, only a month after the first performance of his great E minor Mass in the same city. Nine years later he wrote the antiphon Tota pulchra es, Maria for the 25th anniversary of his friend and supporter, the Bishop at Linz, Franz Josef Rudigier. It was one of the few compositions that Bruckner produced during the depths of his depression following the poor reception of his third symphony.

In 1879, the year of the String Quartet in F major, he completed the Gradual Os iusti, dedicating it to Ignaz Traumihler, the Regens Chori of St Florian, and later in the same year he began work on his sixth symphony. Symphony No 7 was completed in 1883 and the Te Deum the following Spring. After a visit to Prague Bruckner returned to Vienna to set the Gradual Christus factus est, dedicated to Father Otto Loidol of the Benedictine Monastery of Krems-munster.

1885 saw the 1000th anniversary of the founding of the Linz diocese and Bruckner celebrated this event with Ecce sacerdos, dedicating it, like a number of his more extensive works, ‘to the greater glory of God’. Virgo Jesse floruit, again dedicated to Ignaz Traumihler, was composed in the same year whilst work on the eighth symphony was still in progress.

The last of Bruckner’s shorter sacred works, the hymn Vexilla regis, was completed in 1892, but the major project of this period, the great ninth symphony, was to remain incomplete at his death four years later. Bruckner was already in physical and mental decline, yet the motet shows no sign of a diminution of his inventiveness or technical brilliance.

Locus iste is a poignant, uncluttered ternary-form working of the text from the Mass for the Dedication of a Church. Bruckner extends his syllabic word setting only towards the end, on ‘Deo’, where sliding chromatics spice all parts. The middle section is characterized by imitative entries, first led by the basses then by the tenors, each phrase pushing the work towards a new, more exotic key, before returning to the clear C major of the first section repeat, now modified.

Os iusti is a setting of Psalm 37: 30–31 (Psalm 36 in the Vulgate). Its dedicatee, Ignaz Traumihler, was an adherent of the Cecilian movement, devoted to unchromatic, a cappella, choral music in the supposed style of Palestrina, and Bruckner produced for him a work clearly in the Lydian mode and undeviating from the tenets of composition in this style. The ternary form is adeptly manipulated, Bruckner skillfully concealing the return from the imitative middle section to the more chordal and syllabic framing section. The work ends with the plainchant Alleluia celebrating the God-given wisdom of Doctors of the Church.

Afferentur regi, taken from the Common of a Virgin Martyr and based on Psalm 45: 15 (44 in the Vulgate), has three trombones to support the choir, is ternary in shape, and predominantly imitative. Of especial note is the tonic pedal employed with surprising effect in the final cadence.

The supplication to the Virgin, Ave Maria, derived from the Annunciation, is set for divided parts, facilitating the contrast of upper and lower voices. The final cadence is the ‘Marienkadenz’, used by the composer in his earlier setting of the text, in the F minor Mass, the third symphony, and elsewhere.

The Phrygian mode setting of the great Passiontide hymn in honour of the Cross, Vexilla regis, to words by the sixth century Bishop of Poitiers, Venantius Fortunatus, suggests in its opening phrase the ‘Dresden Amen’, used by Wagner for the Grail motif in Parsifal (Bruckner had been present at its first performance in 1882). The powerful key shifts in this work illustrate the lengths to which Bruckner was prepared to go in order to gain impact and expressiveness in his settings of well tried texts.

The Common of a Confessor Bishop is the appropriate source for the prophetic text of Ecce sacerdos. Three trombones and organ complement the often-divided mixed chorus. The dramatic harmonic shifts of the opening are contrasted with the smooth imitation of the answering section (again with hints of the ‘Dresden Amen’) and the whole develops into one of the most formally interesting of the motets. The thrice repeated ‘Ideo iureiurando’ section forms the backcloth against which the contrasting sections are thrown, most notably the penultimate section in which the whole choir sings the Aeolian plainchant, ‘Gloria Patri et Filio’.

In Tota pulchra es, Maria (words from the Immaculate Conception of the Blessed Virgin), each statement by the solo tenor is immediately affirmed or developed by the full choir, with sparing support from the organ. Bruckner saves one of his most startling chromatic shifts for the words ‘Mater clementissima’ when, in the space of four bars, he wrenches the key down a semitone, from D minor to D flat major, in order to express the wonderment of this mercy.

Another prophetic text, from the Feasts of the Blessed Virgin, provides the source for Virgo Jesse floruit. The ‘Dresden Amen’ again plays an important part in some of the cadences of this piece. Bruckner uses the through-composed techniques of the Renaissance in this work but develops that form with key changes and parallel chord movements that stretch its tolerance to the limit.

Pange lingua is a hymn of the Corpus Christi office by the thirteenth-century theologian, St Thomas Aquinas. Bruckner’s Phrygian mode setting was, on its first publication, ‘corrected’ by Franz Xavier Witt—a Cecilian—much to the composer’s displeasure. The setting of the hymn is chorale-like, with the same music used for all three verses, only a heartfelt Amen being added to mark its finish.

From the Common of a Confessor Bishop, Inveni David is set for the divided tenors and basses of the choir, accompanied by four trombones. This gives the work a powerful but sombre hue, emphasized by the F minor key of the work’s opening. Bruckner makes great play of the major/minor shift here, stressing the ambivalence of the text.

The setting of the Holy Week Gradual Christus factus est is intended for Maundy Thursday. It is certainly the most effective that Bruckner made, though not the most fully scored, and impresses less by the drama of the setting than by the subtle intricacy of harmonic shift and motivic development. The final cadence is a fine summation of Bruckner’s art, reconciling outward movement with inner stillness.